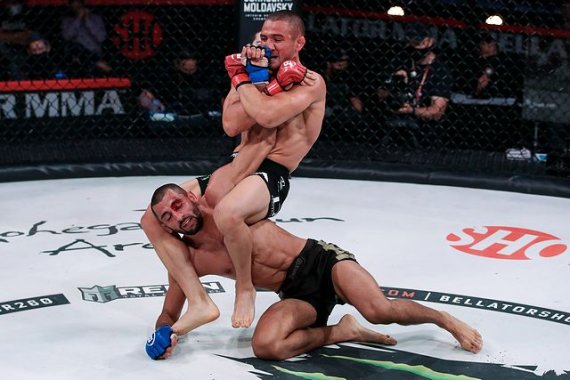 Per
ESPN on Thursday, Aaron Pico
(8-3) will come to blows with Justin
Gonzales (12-0) at Bellator’s Nov. 12 card at the Seminole Hard
Rock Hotel and Casino in Hollywood, Fla. The two featherweights
will both be riding impressive win streaks into their meeting.

Pico has rattled off four straight finishes since his relocation to
Jackson-Wink MMA after a pair of knockout losses to Henry
Corrales and Adam Borics
in 2019. With the four stoppages in row, including a June anaconda
choke of Aiden Lee,
Pico has already found himself
high on the list of the most wins inside the distance in Bellator
history with eight. His appearance against Lee marked the first
time the 25-year-old had ever competed beyond the second round in
his 11-fight all-Bellator career.

“J-Train” made his successful organizational debut at the same
event that Pico submitted Lee, snagging a split decision over
Tywan
Claxton. Before signing with Bellator, the longtime Sparta
Combat League competitor prevailed on the third season of Dana White’s Contender Series over Zach Zane,
but his performance was not enough to earn a contract. A subsequent
body kick knockout of Jake
Childers to capture the Legacy Fighting Alliance featherweight belt
propelled him onto the Bellator roster.

Bellator 271 goes on at the Seminole Hard Rock Hotel and Casino in
Hollywood, Fla., on Nov. 12. The main event sees Cristiane
Justino defend her featherweight title against Sinead
Kavanagh. Other featured bouts on the card include a
heavyweight tilt pitting Tyrell
Fortune against Linton
Vassell, and a 145-pound scrap between Arlene
Blencowe and Pam
Sorenson.