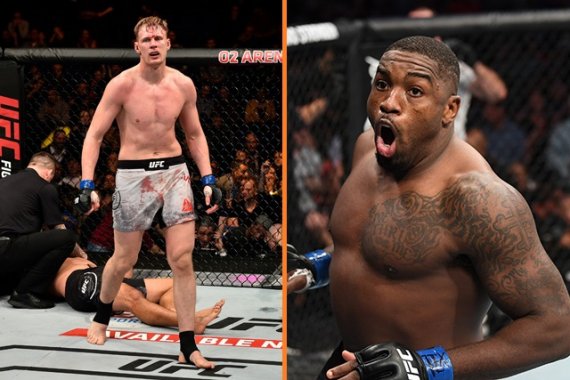 Sign up for ESPN+ right here, and you can then stream the UFC live on
your smart TV, computer, phone, tablet or streaming device via the
ESPN app.

Two hard-hitting heavyweights are going to be on the
marquee of a
Ultimate Fighting Championship pay-per-view in October.

On Wednesday night, Sports.ru first
broke the story that Alexander
Volkov (31-8) will square off with Walt Harris
(13-8, 1 NC) at UFC 254 on Oct. 24. Multiple
outlets have since confirmed the booking. The location of this
heavyweight rumble is not yet decided, but it will likely be held
at either the UFC Apex in Las Vegas or Yas Island on Abu Dhabi,
United Arab Emirates. The two heavyweights combine for 33 knockouts
in their 44 career wins.

Volkov will be looking to bounce back from a one-sided decision
loss to Curtis
Blaydes in June, where the Russian was taken down at will and
ground out for 25 minutes. Through his tenure inside the Octagon,
the former Bellator
MMA champ has notched wins over Fabricio
Werdum, Stefan
Struve, Roy Nelson
and Timothy
Johnson. “Drago” was well on his way to defeating Derrick
Lewis at UFC 229 in 2018, but with 11 seconds left, Lewis
scored a miraculous comeback to knock the Russian out.

Harris returned to action in May in a headlining bout against
Alistair
Overeem, but his emotional appearance was halted along with a
four-fight unbeaten streak when Overeem finished him in the second
round. All 13 of Harris’ career victories have come by knockout
within two rounds, as a decision win over Andrei
Arlovski was overturned when Harris tested positive for a
banned substance. In addition to this new fight booking, “The Big
Ticket” is also running for a seat on
his local city council in Homewood, Alabama.

UFC 254 goes down on Oct. 24 at an undetermined location.
Headlining the pay-per-view is a lightweight championship
unification match between Khabib
Nurmagomedov and Justin
Gaethje. No other fights have been booked for the card yet, and
the promotion opted to cancel its earlier pay-per-view card on Oct.
10 to leave just one in October.