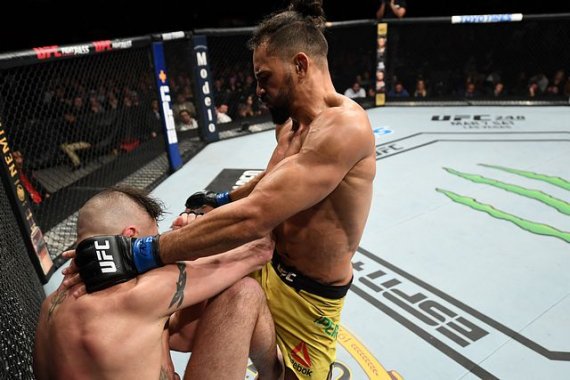 Michel
Pereira has grown in stature with Brazilian fans following his
impressive submission win over Zelim
Imadaev at
UFC Fight Night 176 on Sept. 5. The scene of Pereira kissing
his own hand before slapping Imadaev with it was shown across most
of the well-known news channels in Brazil and sent laughter
rippling across his homeland.

Pereira’s dominant showing was also recognized by the
Ultimate Fighting Championship—and not just in the form of a
$50,000 performance bonus. According to “Demolidor,” UFC matchmaker
Sean Shelby contacted his manager immediately after the bout.

“Mr. Shelby asked him when I would be ready for my next fight,”
Pereira said. “I would love to fight again by November.”

Pereira pointed to a hypothetical pairing with Jorge
Masvidal in the immediate aftermath of his latest victory, but
he admits there are a number of potential opponents who interest
him.

“I don’t know my division’s rankings well,” he said. “To tell you
the truth, my main goal is not to choose famous opponents but to
ask for opponents who can provide great fights for the audience.
That’s why I would love to face guys like Masvidal, [Donald]
Cerrone, Nate [Diaz] or [Anthony] Pettis. The same way Anderson
[Silva] wanted to fight Roy Jones Jr., I would love to fight them
to give the fans a great show. Another guy I would love to fight is
Colby
Covington. He’s such a disrespectful guy, and it would be a
pleasure to slap his face.”

Pereira was born in Tucuma, Brazil, a small city located some 12
hours from Belem, but he recently moved to Las Vegas, where he will
sharpen his skills with Rafael Alejarra—an experienced trainer who
has worked with Wanderlei
Silva, Antonio
Rodrigo Nogueira, Cristiane
Justino and Demian
Maia.

“If I got [three] performance [bonuses] in four UFC fights with no
structure,” Pereira said, “imagine me now, when I have all the
structure of the [UFC] Performance Institute while being supported
by one of the most experienced coaches in the game.”

Pereira started his karate training under Rene Colares at the age
of 12 and transitioned to Brazilian jiu-jitsu under Savio Roveno at
the age of 16. He achieved the rank of black belt in both
disciplines. Pereira has since rounded out his repertoire by
working on his boxing with former Brazilian national team trainer
Ulisses Pereira and polishing his muay Thai and wrestling with
other high-level coaches.

“I trained a lot in all styles,” he said. “That’s why I feel I’m a
black belt everywhere. Wherever my opponent wants to test me, I’ll
be ready. If you compare my 37 fights of MMA experience with all
the ranked guys, you’ll see I’m not behind them. They just arrived
in the UFC before I did. I’m just 26 years old. It’s only a matter
of time for me to reach the top.”

Innovation remains a motivation for Pereira, who promised that his
“slap with a kiss” would not be the only new technique he brings to
the sport. In fact, he has named many of them, from “pitionation,”
“mule kick,” “revestres” and “brutality” to “fatality,” “canga
leitao” and “death illusion.”

“I have 43 different holds,” Pereira said, “and I intend to
introduce the UFC fans to each one of them.”