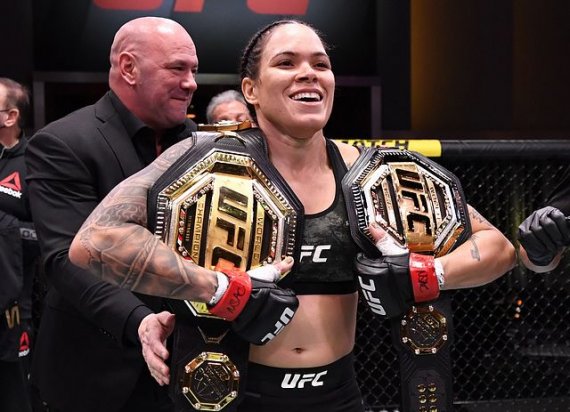 Amanda
Nunes had some strong words regarding a potential trilogy
against flyweight queen Valentina
Shevchenko.

The UFC two-division champion recently discussed that subject —
along with her next title defense and the possibility of a future
showdown with two-time Olympic gold medalist Kayla
Harrison — in an interview on Brazilian podcast
“Mundo da Luta.” Nunes defeated Shevchenko via unanimous
decision in their first meeting at UFC 196 and then via five-round
split decision in their rematch at UFC 215. Shevchenko has been
dominant since dropping to 125 pounds, leading to speculation
regarding another matchup with Nunes.

“If Valentina really wanted to face me again, she would have stayed
at 135 pounds. That’s what I would do if someone beat me twice,”
Nunes said. “I wouldn’t look for the easier way to get a title in a
lower division thinking, ‘Maybe one day I´ll return to face her.’
No way. If she ran from bantamweight it is because she is aware
that I´m the only one who can beat her.”

However, Nunes isn’t opposed to a trilogy with Shevchenko if that’s
what the UFC ultimately wants.

“If Dana White calls me saying I´ll fight next Valentina, or any
other fighter, be sure that I´ll be ready to defend my title,”
Nunes said.

Nunes revealed that she attempted a test weight cut at American Top
Team to see if she could compete in the flyweight division.

“It would be the biggest achievement of my life to [win] a third
belt, but definitely it wouldn’t be safe. I would be able to make
weight, but certainly my performance would be affected,” she
said.

Regarding her last title defense, Nunes recalls being impressed by
the size of opponent Megan
Anderson ahead of their UFC 259 bout on March 6. The Brazilian
nonetheless cruised to victory, retaining her featherweight title
with a first-round submission.

“At the weigh-ins I said to Nina [Ansaroff] that she looked
like a giraffe, but ‘Lioness’ doesn’t fear any other specimen,”
Nunes recalled.

Nunes will return to the bantamweight division for her next title
defense, when she faces Juliana Pena at UFC 265 on Aug. 7.

“She is No. 6 in the [UFC] rankings and was submitted by Valentina
and [Germaine de] Randamie, two fighters I have already beaten,”
Nunes said of Pena. “She has a good jiu-jítsu, but I see a lot of
holes in her game.”

Nunes was also asked about the possibility of a future fight with
Harrison, a training partner at ATT. Harrison is the reigning PFL
155-pound champion and is returning to defend her crown starting
with a regular-season matchup against Mariana
Morais on Thursday.

“I heard she gave some statement about that. We already trained
together at ATT, but now we don’t train together anymore because
eventually we may fight in the future,” Nunes said. “If one day it
happens, I don’t have any problem defending my title against her.
She is really tough and for sure it would be a war and I like to
train for bigger challenges. That´s what motivates me to keep
training hard.”