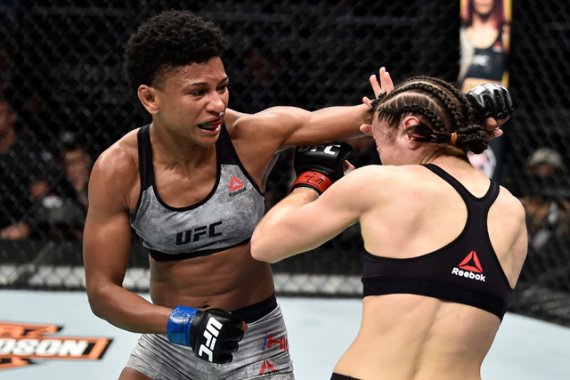 A strawweight clash pitting Amanda
Ribas against Angela Hill
has been rescheduled for
UFC Fight Night 189.

The fighters were initially slated to meet at UFC on ESPN 24 this
past Saturday, but a positive COVID-19 test for Ribas resulted in
the cancellation of the bout. MMA
DNA was first to report the 115-pound rebooking.

UFC Fight Night 189 is expected to take place at the UFC Apex in
Las Vegas on June 5 and is headlined by a heavyweight duel between
Jairzinho
Rozenstruik and Augusto
Sakai. The Las Vegas-based promotion also announced
that Maryna
Moroz will square off against Manon
Fiorot at the event.

Ribas had a five-bout winning streak snapped in her last outing,
when she suffered a second-round TKO loss against Marina
Rodriguez at UFC 257. Hill, meanwhile, ended a two-bout skid
with a three-round verdict over Ashley
Yoder at UFC Fight Night 187.