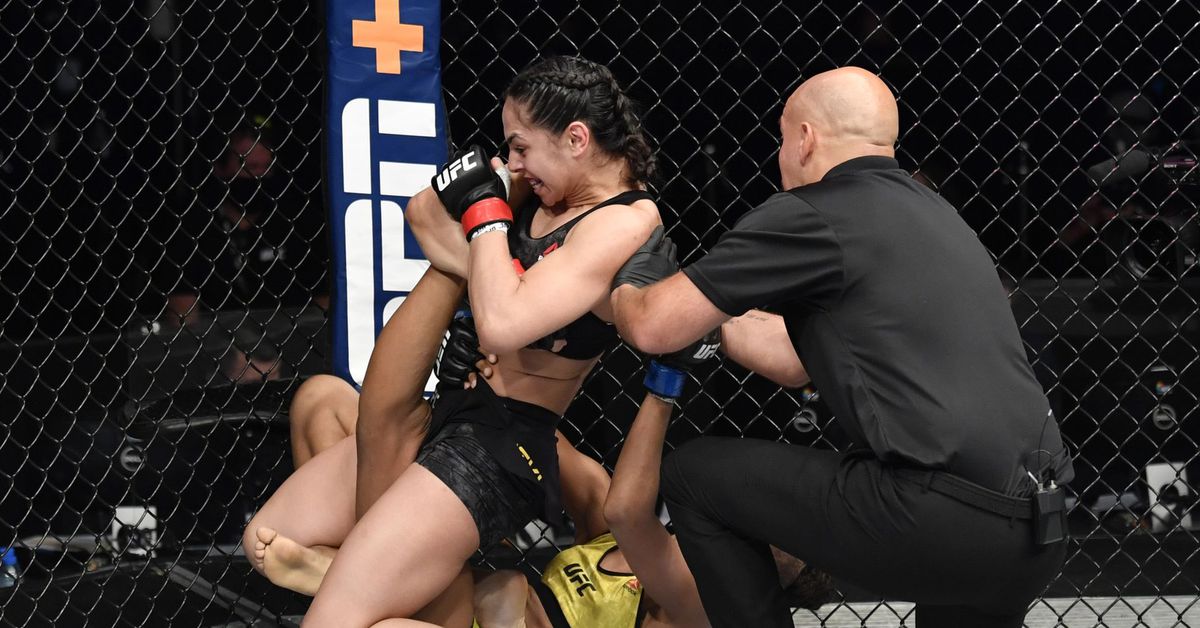 Ariane Lipski is making her run towards the UFC flyweight championship a family business. First, “Queen of Violence” stands against Antonina Shevchenko in the preliminary portion of UFC 255 in Las Vegas. With her younger sister Valentina Shevchenko defending her throne on the same night Saturday, Lipski makes is personal.

“Bullet” Shevchenko will put her 125-pound title on the line in the co-main event of the UFC pay-per-view show against Jennifer Maia at the UFC APEX, and Lipski is counting on a win to get under the champion’s skin.

“They said in an interview that they were used to fighting on the same night in muay thai tournaments, but it’s different now,” Lipski said in an interview with MMA Fighting. “The UFC, that’s a global pressure. I believe it will impact (Valentina), she will know, especially depending on how the fight ends. It will mess with Valentina. I’ll be marked in Valentina’s memory, and sooner or later we will meet.”

That, Lipski said, is the exact reason why she was campaigning for a clash with “The Panther” — that and her spot in flyweight ranking, of course.

“She had the biggest name between No. 10 and 15 because she’s Valentina’s sister, and because she’s a striker and had all that experience,” Lipski said. “I wanna show my striking in this fight. I don’t wanna be an athlete that only wins by submission, that people says it’s luck.”

Lipski scored a devastating submission victory over Luana Carolina in her most recent octagon appearance in July, a violent first-round kneebar in Abu Dhabi. Lipski was “going after the knockout” that time, she said, hoping to “show how much I’ve evolve on the feet,” and Shevchenko might be the perfect dancing partner.

“It’s a good match-up for me,” Lipski said. “That’s the fight I wanted. Luana was also a southpaw that switched stances a lot, so I basically spent an entire year training for southpaws. Antonina is an experienced athlete, a striker, has world titles in muay thai, but I’m more experienced in MMA.

“She older than me, but I’m getting more and more mature. I’m 26 now, I have 18 MMA fights, and I have my team behind me. No matter how many titles she has, no matter her age and her experience, I’m confident. She’s a striker and so am I, but I have jiu-jitsu, too. She has more things to worry about.”

The former KSW flyweight titleholder admits she was under pressure after losing her first two UFC bouts in 2019, but felt better ever since getting her hands raised versus Isabela de Padua in November 2019.

Fresh off a first-round finish in the cage, a feeling she “almost forgot” after going the distance four times over the past three years, Lipski hopes to jump the line for a shot at the gold — or get herself in a No. 1 contender match.

“I don’t know if it might help,” Lipski said of beating Valentina’s sister on the same night she co-headlines an event in Las Vegas, “but that’s what we want. We’re not overlooking anyone, of course, but we’re confident in our work. I just wanna get there and show that, get the finish and impress.

“The last fighter that beat Antonina was a top-3 in the division, Katlyn Chookagian, and she’s also fighting on the same day (against Cynthia Calvillo). A dominant win over Antonina will show I’m ready for a top-5, and that’s what we’ll ask for (after the fight).”