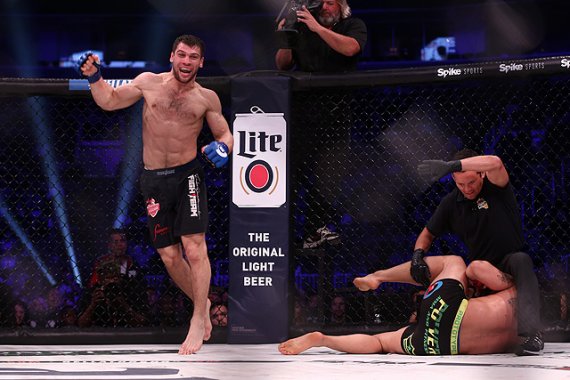 Bellator MMA has beefed up its March event in Connecticut in a big way on Friday.

Sherdog.com has confirmed on Friday a series of fights from a promotional official for its upcoming Bellator 241 card on March 13. Most notably is a main card offering, as Anatoly Tokov (29-2) locks horns with Fabio Aguiar (17-1) in the middleweight division.

Tokov has won all five of his bouts under the Bellator banner since signing with the promotion in 2017, including four finishes. His two defeats coming to current Ultimate Fighting Championship fighter Ramazan Emeev and 2018 Professional Fighters League champ Magomed Magomedkerimov, he also dropped a one-round bout in 2012 deemed an exhibition. Tokov sports a finish rate of 79 percent, with eight of his last 10 victories coming by stoppage.

Aguiar will be making his organizational debut after 15-month layoff — the longest in his career. The Brazilian’s only defeat came to recent UFC signee Bruno Silva, and he has rattled off nine consecutive victories since that setback. Stopping his opponent in 14 of his 17 wins, Aguiar has finished each of his last six adversaries within two rounds.

Additionally, a significant featherweight bout has been added to the prelims, as Leslie Smith (11-8-1) looks to rebound from her first defeat inside the promotion against the surging Jessy Miele (9-3). The winner could find herself knocking on the door of a title shot with a wide-open division, as Cristiane Justino dethroned Julia Budd in January. Smith most recently dropped a decision to potential title challenger Arlene Blencowe, while Miele has won each of her last four including her promotional debut against Talita Nogueira in October.

The other preliminary matchups include: Killys Mota vs. Nate Andrews at lightweight; Leandro Higo vs. Johnny Campbell at featherweight; Robson Gracie Jr. vs. Billy Goff at welterweight and Romero Cotton vs. Justin Sumter at middleweight.

Bellator 241 will go down on March 13 at the Mohegan Sun Arena in Uncasville, Connecticut. Headlining the card is a duo of featherweight grand prix quarterfinals. The main event sees Patricio Freire defend his 145-pound strap against Pedro Carvalho, while Daniel Weichel takes on Emmanuel Sanchez on the another part of the bracket.