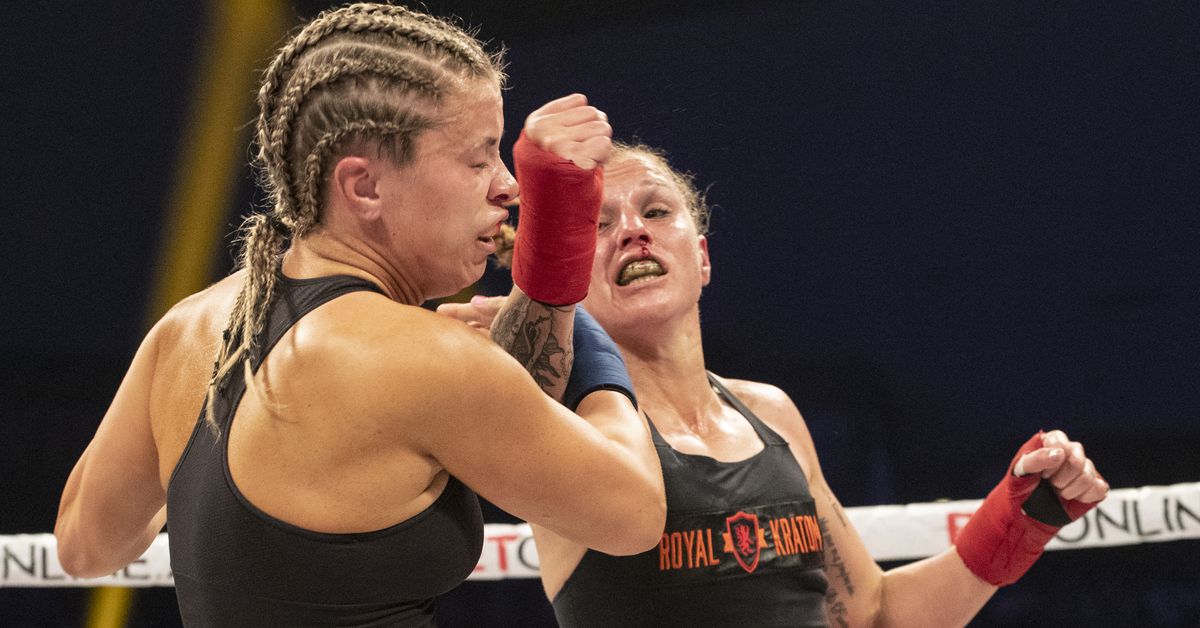 Sporting a pair of shiners, breakout bare-knuckle boxing star Britain Hart has just started answering her phone after the biggest win of her career in a BKFC headliner against Paige VanZant.

There have been so many well-wishers over the weekend, she’s felt like she has just come up for air. After an iconic post-fight interview in which she declared, “I’m not a person. I’m not. I’m a f*cking feeling,” her victory tour consisted of an extended stay in a dental chair to repair the damage to her teeth and a cross-country plane ride back to California.

Adrenaline gave that post-fight interview as much as anything else. Then Hart found out she’d gone viral, and she was really in shock. But it also wasn’t the first time she’d said those words.

“I’ve explained it to people before, and it’s really the only right way to explain who I am as a fighter and as a person,” Hart told What the Heck after her decision win at KnuckleMania in Lakeland, Fla. “I’m a fighter, but I’m a mom, I’m a friend. I’m all these things, but the best thing to say is ‘I’m a f*cking feeling.’

“It came out a little crazy, because I just did bare-knuckle, went 10 minutes getting punched bare-knuckle in the face … but I didn’t have any idea that it would get attention like that.”

Hart seized the moment at this past Friday’s event. Now the question is what comes next. She hopes above all else that it’s a title shot. Maybe there’s merchandise in her future, too. T-shirts wouldn’t be the worst idea.

The good thing is, there are options. For much of her career, Hart has felt the opposite was true.

Everything that could go wrong has, she explains. There was the time she drove to a fight in Columbus, Ohio, only to have her car stolen and her bank account emptied when the thieves got to her debit card. There was a decision loss in Texas one year ago that drew calls of robbery from hundreds of YouTube commenters. There were legal problems, an abusive relationship and other hurdles.

When Hart sidled up to the referee for the final decision, her experience in boxing left her half-expecting the call to go to VanZant, just because. Then it was her name on the loudspeaker. That’s where that speech came from.

“Of course, I overreacted a little more than usual, because it was a surprise to me that people are actually living up to their word in being fair in their decisions and choice-making,” she said.

Hart didn’t agree with people who opined that she was being set up to lose to the more popular VanZant, who came into the fight advertising a bigger platform and paycheck as she transitioned into a new sport. If anything, she felt she was being asked to represent her sport.

When VanZant shoved her at the weigh-ins, she sensed a sort of weakness.

“I wasn’t doing anything crazy,” Hart said. “I wasn’t going to put my hand on her or pull her hair or smack her, I just ran up on her to get extremely close to her face to kind of send the message, this sport is going to be uncomfortable, and I’m going to make you uncomfortable in it.

“But when she put her hand on my neck and my throat, that fighter instinct in me again, I kind of was like, what the hell is she doing that for? I’m doing something normal, coming up in your face for a weigh-in photo, and you’re going to put your hands on me?

“I think it proved a message that she was thinking that she might have been above everything, and she makes the rules, and that she’s not having respect coming into a game, where I know all the rules and know how to do it. I just don’t think that was a smart move against a veteran.”

The throng of well-wishers keep telling Hart the same thing: You deserve this, Brit. And now, it’s hard for her not to agree.

“Going back to that feeling, the feeling of working hard and really working for something and believing you can do it, and then it happening,” she said. “That is an insane feeling. So I’m definitely feeling it.

“I failed my way to greatness. I have literally have failed so many things and have so many life situations, ring situations. … I go through every single life situation at least once, good and bad. I have been through it all, and people just don’t realize. It has been a ride. A lot of people are like, man, if your life was a reality TV show, everybody would be watching it.”

Hart certainly has the attention of fight fans. VanZant will need to re-capture it, and a rematch might be the best way.

“I think I clearly beat her,” Hart said. “I’m honestly thinking every round I beat her, but if she wanted to do it again, I’m a company person. … If we did do the rematch, I’d fix the problems I had that would have perhaps knocked her out.”

She could also go another direction, facing off with Jenny Savage, who got doused with sponsor-branded water after initiating a confrontation in the ring after her win. Whatever her course, she did what she set out to do, which was show the world that she’s the real star of bare-knuckle.

“I get to live out the female Rocky story through BKFC, and they let me do that,” she said.