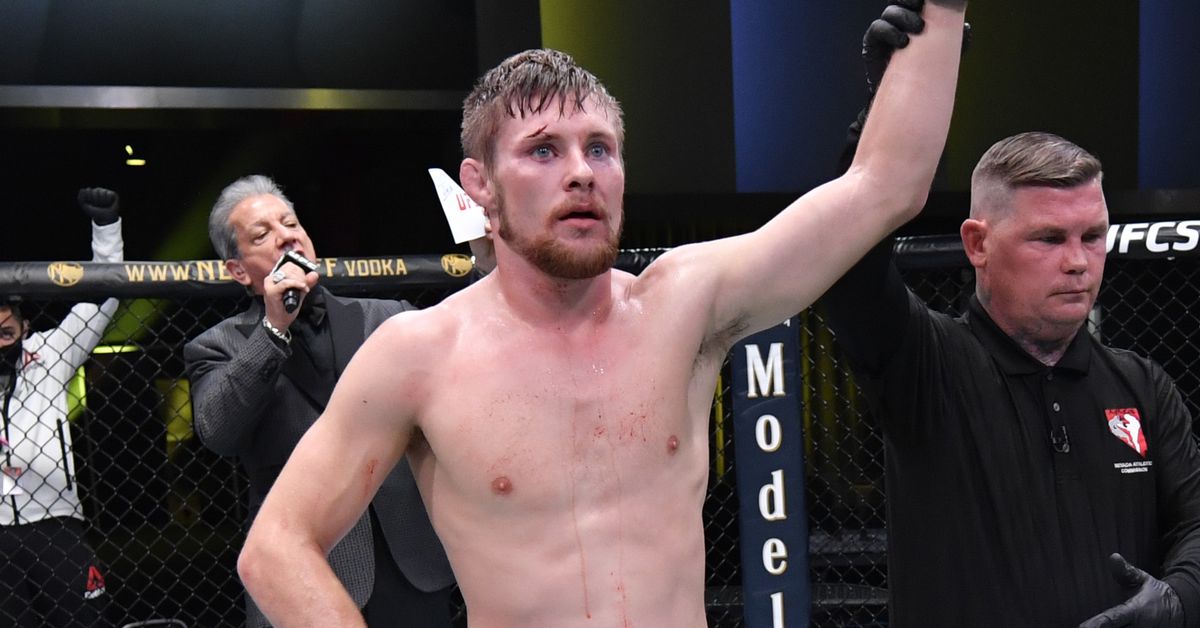 Bryce Mitchell is finally healthy and ready to resume his UFC title chase.

The undefeated featherweight prospect revealed Wednesday on The MMA Hour that he is eyeing a return to the octagon in early 2022 after missing all of the past year because of a broken hand he suffered in his UFC Vegas 12 win over Andre Fili at the end of 2020.

“For about four months I couldn’t even carry in groceries with my left hand, because it was still rehabbing and everything,” Mitchell explained on The MMA Hour.

“I was training with one hand, but it’s not the same obviously. So I had to heal that hand up, and then it took quite a bit of months after that [before] I could start using the hand, get my full grip back, and then I’m comfortable hitting with it. But everything seems to be back to normal [now], so I’m not really worried about it at all.”

The news is certainly welcome for Mitchell, as the 27-year-old has become somewhat of a forgotten man at 145 pounds after garnering significant momentum for his 5-0 start to his UFC career. Mitchell competed twice a year in both 2019 and 2020, and emerged as somewhat of a fan-favorite for his eccentric personality, grappling wizardry, and love of camouflage shorts. But 2021 was a very different year for “Thug Nasty,” a year defined by the frustration of not competing — and it’s a year that Mitchell is eager to put behind him.

“Brother, that’s the definition of stir crazy,” Mitchell said. “And I’ve heard a lot of fighters talk about it, being emotional and everything, and that’s just part of it. I’m not the only person who goes through it. That’s what happens when you do the cage-fighting and whatnot.”

As it turns out, Mitchell did find at least one way to keep himself busy. The Arkansas native revealed that he recorded his first rap mixtape under his “Thug Nasty” moniker and plans to drop the seven-track album on his YouTube channel next Wednesday. Mitchell said he grew tired of making rap tracks but just keeping them to himself, and wanted to take his efforts public.

As for his UFC career, Mitchell said that he’s targeting a return in early 2022 and already may have an opponent on the books, although nothing was official as of Wednesday.

“They were trying to find me an opponent. And then they kind of did, and that kept getting pushed back because they already had the dates that they wanted filled up,” Mitchell explained. “So it’s just taken a little while, but I’ve been told I can’t say anything because all I’ve done is verbally agree. And I can tell you that — I’ve verbally agreed and it’s coming up soon if they verbally agree, but I don’t know if they have.

“I don’t even know if the dude’s healthy or not. I don’t know anything about what’s going on on the opponent’s end, but I verbally agreed and they’re going to find me something here soon and they’re working with me, so I appreciate it. I’m not trying to rush them.”

Mitchell teased that, if it does happen, the bout would be against a big name and that he personally liked how the stylistic matchup favored his skill set.

Mitchell is currently the No. 15 ranked featherweight on MMA Fighting’s Global Rankings, but he believes that with just two more wins, he’ll be able to rocket himself into an opportunity to challenge for the UFC title — and if that happens, he likes his chances.