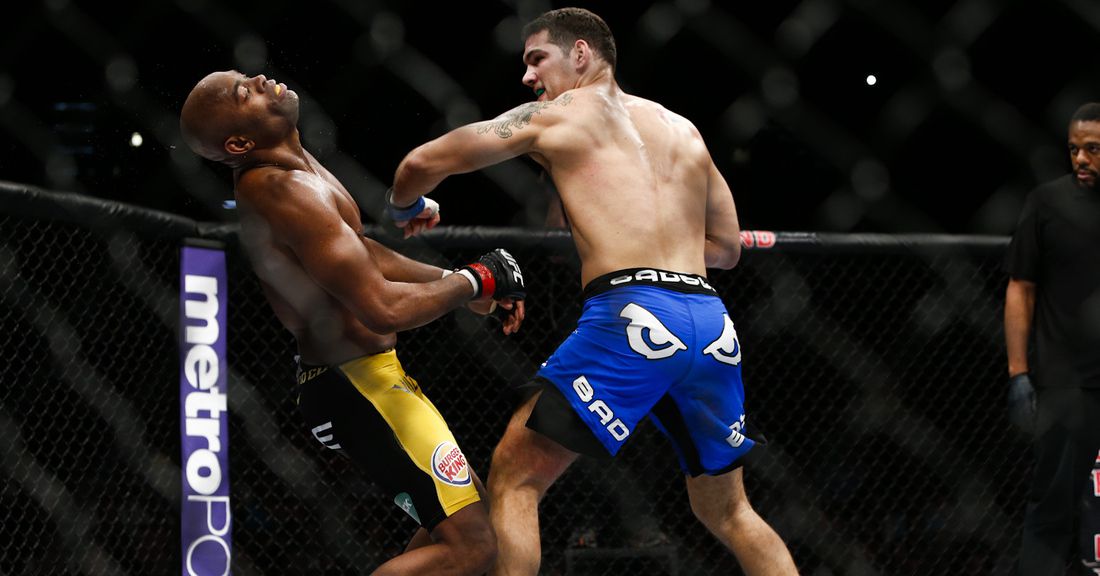 When Chris Weidman was just five fights into his UFC career, he made a statement that was widely panned as shear lunacy.

Weidman said he was the person made to beat Anderson Silva, who, at the time, was the most dominant champion in the UFC. After rattling off 10 consecutive title defenses and knocking out three light heavyweights during that same streak, Silva had positioned himself as arguably the greatest fighter in the history of the sport.

Despite all those accolades, Weidman was ultra-confident he had the skills to dethrone Silva. When he finally got his chance, it took him just over six minutes to prove it by knocking out Silva at UFC 162 in 2013.

Now eight years later, Weidman is once again attempting to climb his way back into title contention and after earning a grueling win over Omari Akhmedov last year, he’s set to face Uriah Hall at UFC 261 this weekend. Weidman has no bad blood with Hall whatsoever, but he is looking to prove a point with their fight, and it’s the same one he was trying to make all those years ago when Silva was seen as an unstoppable force and an unbeatable champion.

“I think this is a great fight,” Weidman told MMA Fighting ahead of UFC 261. “It’s a good opportunity for me to display my skills against an athletic striker. It just so happens that the champion in our weight class is an athletic striker, Israel [Adesanya], so I want to just put out there a little bit of a blueprint what would happen if I fight Israel.

“There’s more to this fight than me and Uriah Hall. I really want to make a statement in this fight. I see myself going out there and completely dominating Uriah Hall. Making a big statement. Letting people know that I am still here, there’s just some people that might have forgot that I’m a problem.”

Funny enough, one of the first times in his career that Weidman had to prove people wrong was when he faced Hall back in 2010. At the time, the middleweights were rising prospects on the east coast.

At the time, Weidman was considered a dominant wrestler after becoming an NCAA Division I All-American at Hofstra. Hall, meanwhile, had made waves with four consecutive knockouts to start his career. Despite the obvious clash in styles, Weidman needed less than four minutes into the first round to let the world know he was more than just a wrestler.

“Ironically, I ended up knocking him out with the left hook — the same left hook that knocked Anderson Silva out with.”

He knows the rematch with Hall will almost certainly play out different, but Weidman ultimately hopes for a similar result as he seeks to send a message to the UFC middleweight champion with the win.

Part of the reason for that comes down to Weidman’s confidence that he’s already figured out the path to victory against Adesanya.

It’s a road that UFC light heavyweight champion Jan Blachowicz traveled during his five-round unanimous decision win over Adesanya just recently as he used size, strength and grappling to ground the dynamic striker.

By no means is Weidman saying that he’d have an easy time getting past “The Last Stylebender,” but he can’t help but feel like he’s seen a stylistic matchup just like this before.

“I still think Israel Adesanya, he’s a great fighter, great stand-up, great distance control, his feints are great, he’s a great chess player on the feet for sure,” Weidman said. “I just really want to make a make a statement in this fight that a guy like Israel Adesanya, I’m built to beat guys like that. I really am.

“He’s another Anderson Silva in my opinion. He’s a younger Anderson Silva. Israel’s very good with his striking, he’s very quick, but his weakness is that he’s not that strong. I’ll grab him and he’s going to feel like it’s Blachowicz grabbing him. You add my jiu-jitsu in with my wrestling, it’s fun.”

Of course, Weidman understands his statements regarding a future fight against Adesanya are going to be met with derision. But he’s also making it clear that he has no plans to call for a shot against the champion even with a win over Hall on Saturday night.

He still has work to do, and he hopes to lay the groundwork with his performance over a similar opponent on Saturday night.

“I don’t want to get ahead of myself because I have a lot of work to do before that happens,” Weidman said about a hypothetical fight with Adesanya. “But my end goal is that. I want to fight him. I love that people think he’s as good as they think he is. I do think he’s good but I just know I have what it takes to beat him. I like those challenges. I like to beat people that people think I can’t beat.

“I’ve got work ahead of me. It’s not happening the next fight or maybe even the next fight after that, but I’m going to do my best to show people that’s the fight they’d want to see. At the end of the day they will laugh at that at this point but they just don’t know the truth. My goal is to shut them all up and let them all see that very soon.”