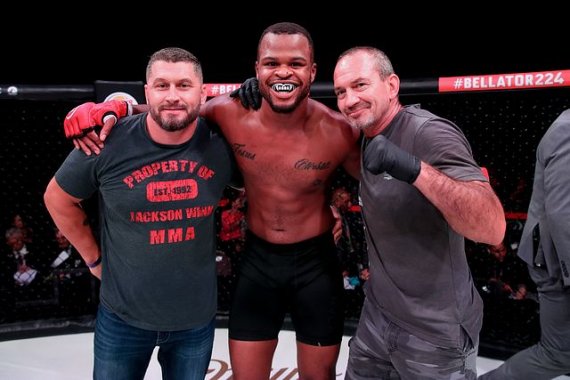 A 210-pound catchweight clash pitting Christian
Edwards against Ahmed
Samir Hefny is one of four additions to the Bellator 243
card.

Three other bouts were also announced for the event: Nainoa Dung
vs. Charlie
Campbell at lightweight; Dalton
Rosta vs. Mark
Gardner at middleweight and Grant Neal
vs. Hamza Salim
at light heavyweight.

Sherdog.com confirmed the matchups with a promotion official
following reports from
MMAjunkie.com and
KHON2. Bellator 243 takes place at Mohegan Sun Arena in
Uncasville, Conn., and is headlined by a rematch between Michael
Chandler and Benson
Henderson. The main card airs on Parmount Network and Dazn at
10 p.m. ET/9 p.m. CT.

Edwards, who trains at Jackson-Wink MMA in Albuquerque, New Mexico,
is unbeaten in three Bellator appearances – including a pair of
KO/TKO finishes in less than a minute. He last fought at Bellator
239, where he took a unanimous decision over DiMarcco
Hutchison.

Hawaii’s Dung was victorious in his first three professional
appearances – including two in Bellator – before dropping a
unanimous verdict to Zach Zane in
his most recent outing at Bellator 236.