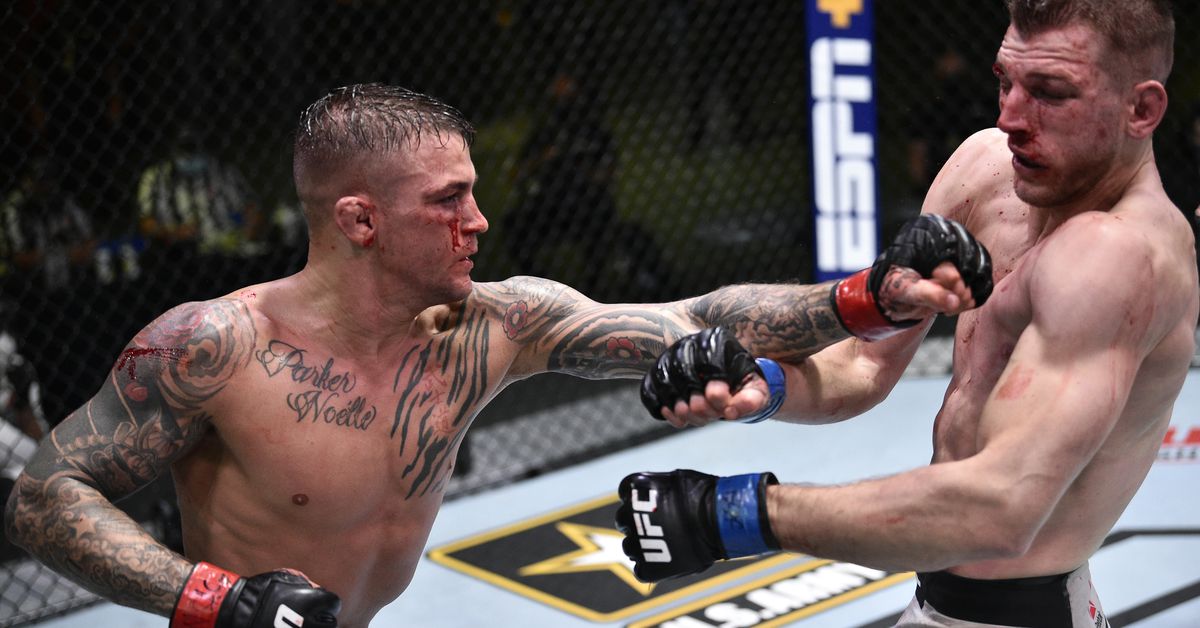 Mike Brown knew Dan Hooker was going to be a tough test, which is exactly why Dustin Poirier was prepared to dish out punishment for all five rounds.

Just days removed from the UFC on ESPN 12 main event, Poirier’s American Top Team head coach Team explained the keys to victory in a fight where the former interim champion had to survive an early surge from the New Zealand native before taking over in the final 15 minutes.

“Something we talked about was patience for sure,” Brown told MMA Fighting on Monday. “We know that Dustin is always going to be strong as the fight goes on and we knew Hooker tends to slow down. He showed it in past fights. He’s very good early but as he slows down, his defense gets a little bit worse and you’re able to hit him a little bit more. Where early on, when he’s full of energy, he’s able to use distance a little better and make you miss with those shots.

“Very similar to the [Paul Felder] fight. He won the first two [rounds] and then Felder started coming on strong won three and four, then Hooker stole it with a takedown in the fifth. He’s tough as nails but you do see his reaction time and footwork does slow down a tad as the fight goes.”

When it came to Poirier’s preparation, Brown had no doubts that he would be ready to go all five rounds. The strategy showed in Poirier’s output as he continued to pour on the pressure while landing a higher percentage of his strikes in the last round than any other in the fight.

If not for Hooker’s durability, Brown is confident Poirier would have added another finish to his resume.

“His conditioning is as good as it gets,” Brown said about Poirier. “He hits as hard in the fifth [round] as he does in the first. That’s one of his best attributes. He gets a lot of them out of there but I am 100 percent impressed with Hooker’s chin.

“He did show that in the Edson Barboza fight. He eventually got out of there with a body shot but he took as many head shots as anybody you’ve ever seen, just flush, clean, hard shots. Definitely impressive chin on Hooker.”

Perhaps the scariest moment in the fight for Brown and the rest of the coaches was during the second round when Hooker slammed home a pair of knee strikes that definitely rattled Poirier.

In fact after the fight was over, Poirier said that his lights might have even gone out momentarily after the knee landed but he bounced back right away.

“It was a brutal combo,” Brown said. “It was like Dustin got hit with a bunch of clean punches and then hit with two clean knees. He didn’t look like he was wobbled or anything like that but you could tell it definitely wasn’t good.

“The leg is so heavy. A knee is much heavier and more powerful than a punch. He’s tall with flexible hips so that knee comes up quick with a lot of power. That was a bit scary.”

As the fight moved forward, Poirier really began to take over and when the final horn sounded there was no doubt that he had secured the victory.

Over 25 minutes, Poirier was able to show off his conditioning, his durability as well as a striking arsenal that was actually made even more lethal thanks to the hip surgery he had after battling Khabib Nurmagomedov this past September.

“Maybe the most natural talent of anybody I’ve ever met,” Brown said about Poirier. “He’s up there. Amazing conditioning, strong mind, strong will and also power. Punching power and also kicking power. He kicks like a mule. Something he hasn’t used a ton because he had a hip problem, he just had a hip surgery before this one to clean some stuff up and hopefully allow him to use it a little bit more.

“He started to [use it]. It was good to see him using that leg more, going to the body. I don’t know what it looked like on camera but live it was hard. He was slinging that thing into his body, just smashing into the organs and that’s going to take the life out of you. That’s going to take that gas meter down pretty quick.”

While every fight in the UFC is important, Poirier had a lot of pressure riding on his shoulders for this performance after losing his bid to become undisputed champion last year.

It’s not uncommon for title contenders to miss a step when coming back from defeat but Brown never had a doubt in his mind that Poirier would return to form after facing Nurmagomedov.

“I never lost faith in Dustin,” Brown said. “I know what he’s capable of. I know what to expect. Khabib is the best. He’s got a proven track record. It was a tough stylistic matchup, one that I think Dustin can overcome in the future.

“I have a lot of faith in Dustin and I expected this. I expected he was going to bounce back and take this fight. I didn’t want it to be so wild and crazy, which it had the potential to but he does this a lot. I was confident in his ability.”

When the fight was over, Poirier ended up back in the hospital for precautionary reasons but that seems to be a regular trip for him these days.

Obviously, Brown would love a few more first-round knockouts but at this level of the game, he understands that fighting the best in the world will usually result in wars. Thankfully more often times than not, Poirier is the one walking away from those battles with a win.

“This is a theme that’s been going on for him for years.”