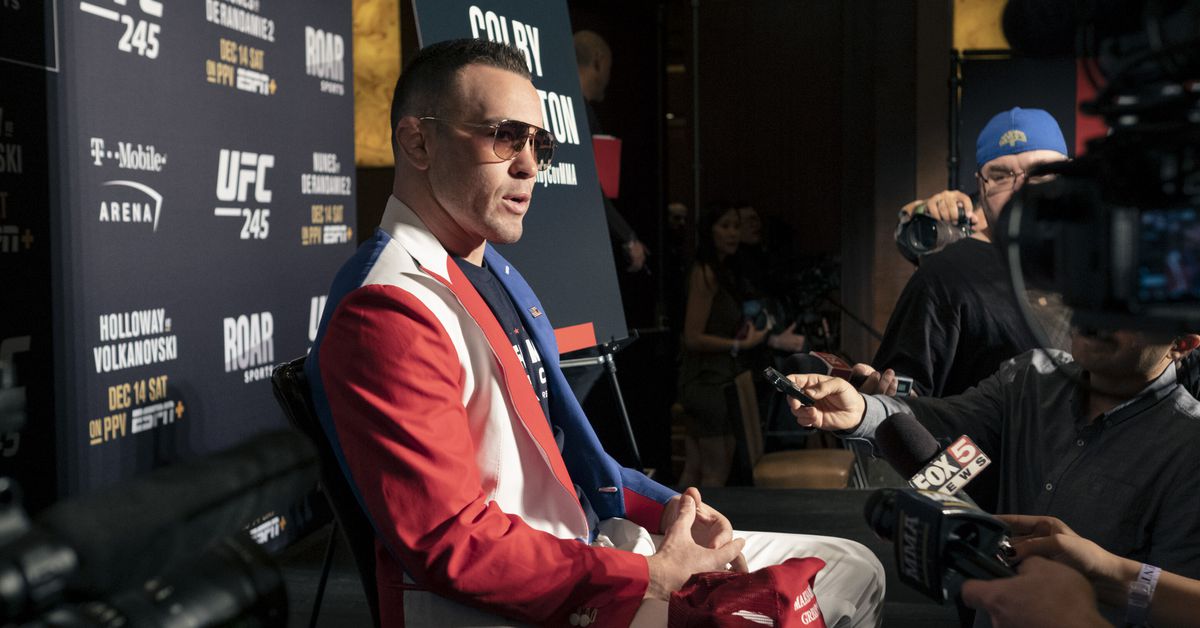 Despite his typically brash persona, Colby Covington has a lot of respect for both competitors of Saturday night’s championship fight in Las Vegas.

In the main event of UFC 252, Stipe Miocic will defend his heavyweight title against Daniel Cormier in the third and final meeting between two of the very best the division has ever seen. Additionally, it’s expected to be the final fight of Cormier’s incredible career.

Covington holds Cormier and his accomplishments in high regard ahead of the former two-division champion’s swan song.

“I’ve got a lot of admiration and respect for Daniel Cormier,” Covington told MMA Fighting. “He’s had a legendary career. I made an Instagram post about him a year or two ago calling him the ‘Natty GOAT.’ I really do feel like he is the ‘Natty GOAT,’ and by that, I mean the natural GOAT. He’s the natural greatest of all time.

“You see all these other guys, try to compare the GOATs, these are all guys that did steroids. So let’s talk about natural. That’s what Daniel is. He’s the embodiment of a good person and a good soul. I wish him well this weekend.”

The respect carries over to the reigning heavyweight title holder for his work in and out of the octagon.

“Stipe’s another great person, too,” Covington stated. “He’s a firefighter, he’s a first responder, so I have to give a lot of love to him for what he does for the people of his city and around the world.”

In their first meeting, Cormier, who entered the bout as the light heavyweight champion, became only the second in UFC history to hold two titles simultaneously following a first-round knockout of Miocic at UFC 226.

After he submitted Derrick Lewis to successfully defend his title at UFC 230, “DC” gave Miocic his rematch 13 months following their first encounter at UFC 241. Cormier had a hot start to the second meeting, arguably winning the first three rounds before Miocic finished the fight in the fourth.

When asked to make a prediction for the trilogy bout, Covington admits it was a difficult one.

As far as Covington’s return to the octagon, a fight with bitter rival Tyron Woodley is being targeted for the UFC’s event on Sept. 19. “Chaos” told MMA Fighting that while the highly anticipated bout is closer to becoming a reality than ever before, it’s not signed, sealed and delivered just yet.

While he awaits his bout agreement, Covington was asked if he’ll tune in to watch Miocic and Cormier’s final meeting. Despite the respect he has for both fighters, Covington says he will spend his weekend celebrating the freedoms the United States has bestowed upon him.

“Yeah, it definitely interests me,” Covington said. “Interesting me and getting me to watch it are two different things. I won’t be watching it because I have better things to do. I’m gonna enjoy my weekend—my weekend of freedom in America, the freest country of all because of the brave. A big thank you to all of our service member out there that puts their life on the line.

“There’s no holidays for war. It’s a year-round, 24-7 thing, and these guys are protecting our constitutional rights we have in America, and they’re protecting them every day. They don’t get enough credit.”