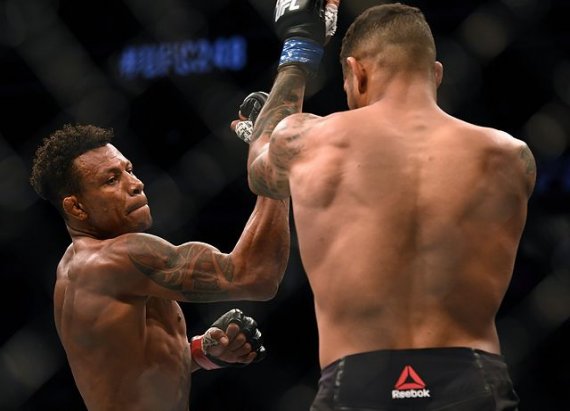 Fighting for the second time in Abu Dhabi in 2020, Alex
Oliveira will face the undefeated Shavkat
Rakhmonov at
UFC 254 on Saturday.

Coming off back-to-back decision wins against Max Griffin
and Peter
Sobotta, the 18-time UFC veteran told Sherdog that he is really
motivated to welcome the fighter from Kazakhstan to the
Octagon.

“I don’t care if it’s a veteran or a young talent who is making his
debut in UFC, when I step in the Octagon my main focus is to
maintain my winning streak and return to the place I belong, which
is the top of the rankings of the welterweight division,” he
said.

Andre
Tadeu, Oliveira’s head coach, recognizes Shavkat as a tough
challenge, but said that the experience his fighter had in his 18
UFC appearances will make the difference in the result.

“The guy is pretty tall for the division and has a nice striking
technique, always walking forward. But I saw all his 12 fights. He
never had a hard time, or bled,” Tadeu said. “Saturday will be the
biggest test of his career when he will debut in the biggest MMA
event in the world facing a tough opponent that also likes to walk
forward. Definitely they will collide. With all respect to Shavkat,
all I can say is that ‘Cowboy’ is pretty well trained for that
fight, and I´m confident he will get his third straight win.”

If he is victorious at UFC 254, the 32-year-old Brazilian already
has an opponent in mind to call out for his next bout.

“My focus is 100 percent on Savkhat,” Oliveira said. “I’m sure it
will be a war, but when I win I will challenge Anthony
Pettis, who is 14th in the UFC rankings. I’m sure our styles
can provide fireworks for the fans.”

ALMOST FAREWELL: “Cowboy” also revealed that
before returning for the win column in 2020, he thought seriously
about quitting MMA.

“I had serious personal problems that were reflected in my training
and also in my results. When I had three straight losses in 2019, I
got depressed and thought seriously about retirement,” he said.

Ultimately, Oliveira said three factors made him change his mind
and regain his motivation.

“A conversation with my master Tadeu, the pride of my 10 kids and
the words of a 8-year-old fan from the poor area where I used to
live [made me change my mind],” Oliveira said.

“[The boy] came to me and said, ‘I’m a big fan of yours. When I
grow up I want to be just like you. You come from a poor family
like myself, but you are a warrior, hard worker and you got world
recognition for that. That´s why you are like a hero and such
a great example for me and everybody here.’ Those words made me cry
and return to the gym and train harder than ever. Since then, I got
two straight wins.”

The Brazilian also shared the story of another fan, Paulo Chorão,
his first supporter who died five years ago while cheering for
him.

“He was like a father to me. He has small bar and always helped me
since I was 11 years old. When I went to fight, he was my first
sponsor. The day I knocked out Piotr
Hallmann in UFC São Paulo [in 2015], I thanked him live in the
Octagon,” Oliveira said. “It was such an emotional moment for him
that he had a heart attack and died in front of many of our friends
who were watching the event in his bar. In two weeks it will be the
fifth anniversary of his death, and if I win [at UFC 254] I want to
dedicate that to him.”