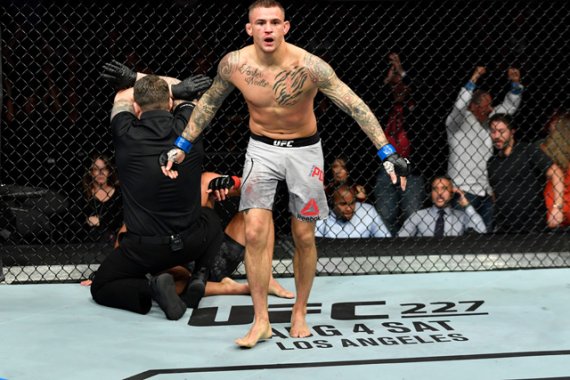 Much to the fans’ regret, it doesn’t look like Dustin
Poirier and Tony
Ferguson will clash anytime soon. The fight never got the
chance to be officially announced by the promotion, but hype was
already skyrocketing for the intriguing clash. During the recent
DWCS 2020 Week 7 post-fight news conference, the UFC president
shared some details about
the failure of the negotiations for the Poirier-Ferguson
matchup.

“Listen, I like Dustin,” White said on Tuesday. “I’m not going to
sit up here and say anything negative about Dustin, he’s a great
kid. I don’t know if it was he didn’t want to fight in Abu Dhabi or
what his deal was – he didn’t want to fight. Listen, there’s a lot
of different ways to turn down a fight. Negotiating yourself out of
one is one of the ways you can do it. So for whatever reason, he
didn’t want to take this fight. Only he knows that.”

It didn’t take too long for the former interim lightweight champion
to answer to White’s accusations. “The Diamond”
took to Twitter to share a visual “I want the fight” reply,
confirming that he is far from having negotiated himself out of the
fight.

The last time he stepped into the cage, Poirier upended Dan Hooker in
a thrilling clash that was rewarded with a “Fight of the Night”
bonus. Prior, he squared off with Khabib
Nurmagomedov at UFC 242, where “The Diamond” got submitted via
rear-naked choke at the 2:06 mark of the third round. Now, it has
yet to be seen when he will compete again.

In the meantime, the UFC is currently searching for another
opponent for Tony
Ferguson at UFC 254. According to
some reports, former Bellator three-time lightweight champion
Michael
Chandler is being considered as a viable opponent for “El
Cucuy.”