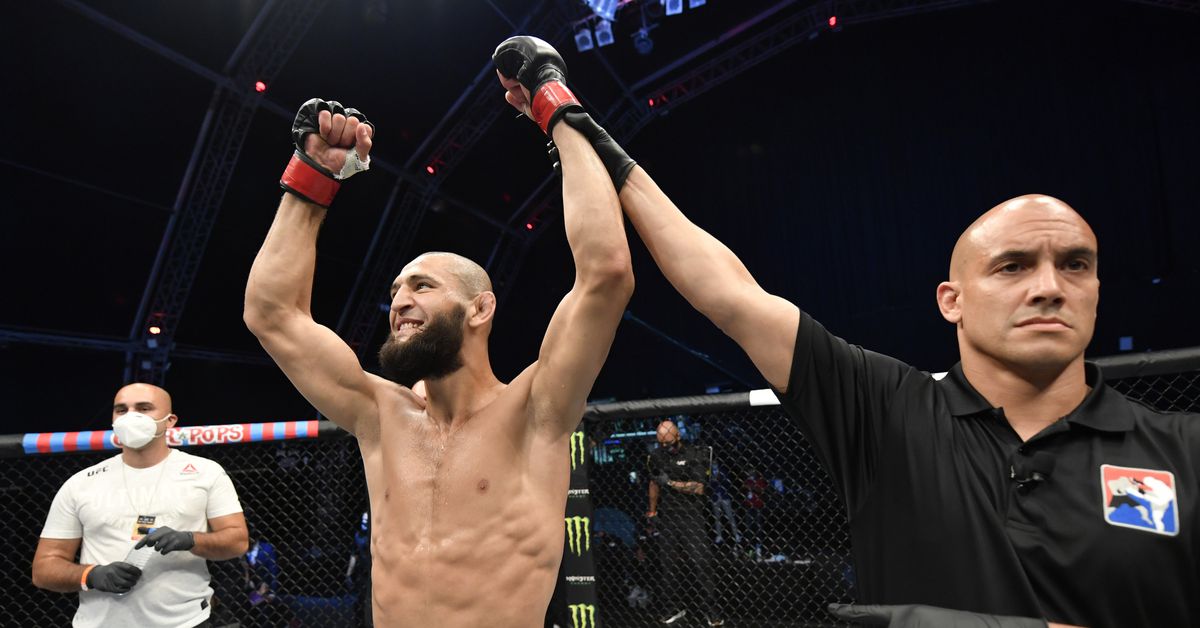 According to Dana White, rising star Khamzat Chimaev is on Conor McGregor’s radar.

“The Notorious” issued a cryptic two-word tweet on Thursday, simply writing, “I accept!” and providing no other context for what prompted his latest social media move. White was asked about the proclamation at a media scrum in Las Vegas on Friday and he explained that McGregor’s tweet was a response to Chimaev calling out several well-known UFC fighters.

“That was Khamzat,” White said. “Khamzat posted, ‘I want Nate Diaz, (Jorge) Masvidal, or McGregor,’ and McGregor said, ‘I accept.’”

Chimaev was the breakout star of the UFC’s Fight Island events in July, debuting on short-notice with a dominant second-round submission victory over John Phillips in a middleweight bout on July 15 and then dropping down a division to record an even more impressive first-round submission win against Cage Warriors standout Rhys McKee 10 days later.

It was the quickest turnaround and shortest time between victories in UFC history.

Chimaev also seems to believe that McGregor’s tweet was directed at him and he answered with two more shots at the former two-division UFC champion.

McGregor has been the UFC’s most consistent box office draw of the past decade and could see a fresh rivalry with the white hot Chimaev (especially with Chimaev claiming he once flew to Ireland to pick a fight with McGregor), but White is in no hurry to make the bout happen. At the moment, McGregor is sidelined after announcing a retirement in June and White expects a comeback to occur only when the time is right.

“No,” White said, with a chuckle, when asked about the possibility of McGregor vs. Chimaev. “Listen, Conor’s retired. Conor’s move right now is sit back, see how this year plays out, and see what’s next for him. You know he wants the Khabib (Nurmagomedov) fight, [Nurmagomedov fights Justin Gaethje on] Oct. 24., so we’ll see.”

So what is to be done with Chimaev? The 26-year-old wants to fight as frequently as possible and following his win over McKee he even suggested that he’d be willing to climb back into the octagon that same night.

White doesn’t know what’s next for Chimaev, but he loves the unbeaten fighter’s attitude.

“Do you guys realize that the kid we matched him up with from the U.K., the last fight he had, that dude is a badass,” White continued. “That guy is legit. Don’t let the way the fight played out fool you. That kid was very good and [Chimaev] made him look not very good. This guy’s at a whole other level. This dude is real.”