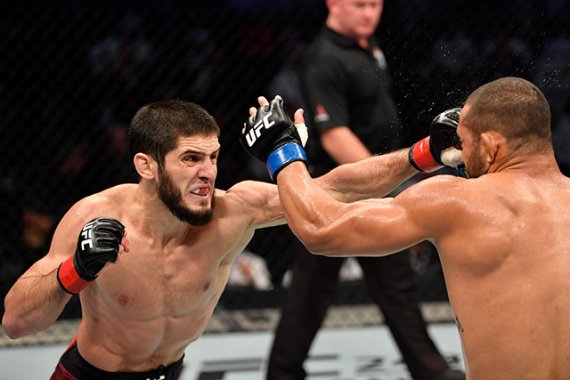 Makhachev will return to action for the first time since September
2019 when he squares off against Drew Dober on
the massive
UFC 259 card in Las Vegas card Saturday. The event, if all
remains intact, features a trio of championship fights at the top
of the bill.

Former two-division champion Daniel
Cormier and lightweight king Khabib
Nurmagomedov both believe Makhachev will be in a similar
position before too long.

“For 10 straight years, we’ve had title fights out of AKA,” Cormier
told
ESPN. “How do we continue that? Islam is the guy. We all
believe right now Islam is our next best chance to have someone
great.”

Makhachev has been victorious in 18 of 19 professional outings and
is currently on a six-fight winning streak within the Las
Vegas-based promotion. He’s had multiple matchups fall through
since outpointing Davi Ramos
at UFC 242, but Dober, who’s won six of his last seven in the
Octagon, provides an opportunity to make a statement. The UFC
lightweight division is crowded at the top, and right now, Dustin
Poirier, Conor
McGregor, Michael
Chandler, Justin
Gaethje and Charles
Oliveira lead the pecking order.

Nurmagomedov foresees that perception changing in the coming
months.

“Now, everybody talks about Dustin, Conor, Chandler, Justin,
Oliveira,” Nurmagomedov said. “But by the end of the year, it’s
gonna be changed.

“I don’t think anyone can beat [Makhachev] right now. He will run
[the division].”

Although Nurmagomedov announced his retirement following a win over
Gaethje at UFC 254 last October, the promotion has not yet vacated
the 155-pound belt. Despite multiple meetings with UFC boss Dana
White, Nurmagomedov seems comfortable with his decision and
unlikely to make a comeback. That opens the door for Makhachev to
pursue his own championship aspirations at 155 pounds in
earnest.

“You knew as long as Khabib was the champion, Islam was going to
take a slower approach to moving up the rankings,” Cormier said.
“But now, Khabib and I talked about it, everybody believes that
Islam can be the man. Now, with Khabib [retired], I believe now
[Islam] starts to make his ascent.”

In UFC competition, Nurmagomedov is regarded as one of the most
dominant wrestlers at any weight class. According to Cormier, he
wasn’t the top dog at AKA in that area.

Due to the hype surrounding it, UFC 259 is the type of card where a
prospect can make the leap to stardom. Makhachev already has made
believers of his talented teammates. Now it’s time to make an
impact on a larger audience.

“I really believe his era is on the way,” Nurmagomedov said.