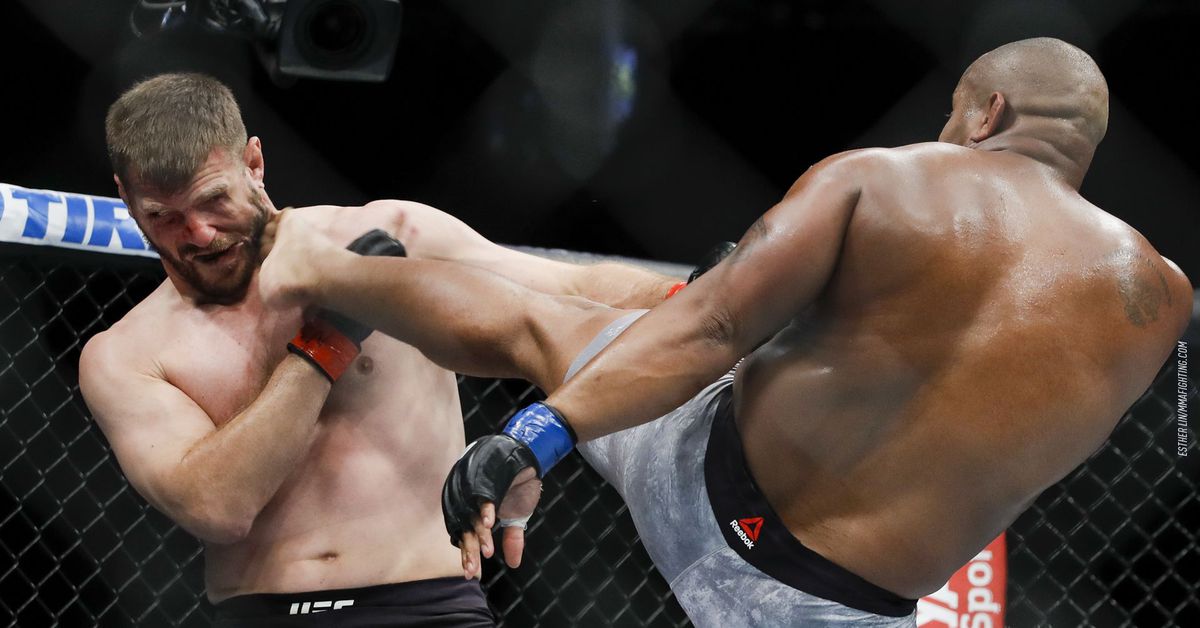 Through two fights and the better part of 20 minutes, Daniel Cormier knows he got the better of Stipe Miocic.

Their first meeting ended in dramatic fashion after Cormier cracked Miocic with a punch in the opening round that dropped the Ohio native and crowned the former Olympian a two-division UFC champion. The rematch started much the same with Cormier beating Miocic to the punch in most of their exchanges but as time started ticking away in the third and fourth rounds, the momentum started to shift.

As Cormier’s gas tank was depleted, Miocic altered his game plan and began attacking the body, which took a serious toll with every punch. After punishing the midsection throughout the fourth round, Miocic eventually got the finish after putting Cormier down with a series of rapid-fire punches that allowed him to regain the UFC heavyweight title.

Ahead of their third and final fight, Cormier has looked back at his first two clashes with Miocic and figured out what went right and what went wrong as he started putting together his game plan.

If there was one glaring omission it was Cormier’s wrestling after he attempted zero takedowns in the first fight and landing only one out of three attempts in the rematch. Considering Cormier was besting Miocic on the feet for the majority of their previous meetings, he may not have needed to rely on his wrestling all that much but he also understands that it’s a massive weapon in his arsenal that’s barely been used through two fights.

“I believe that in every fight, my biggest advantage will be in that area,” Cormier told MMA Fighting about his wrestling ahead of UFC 252. “I wrestled at the absolute highest level in that sport and if I can’t exploit that, then I’m in trouble.”

According to Cormier, the biggest deterrent to using his wrestling in his first two fights with Miocic came down to two major factors.

The first was his own health, which prevented him from hitting the mats with the necessary discipline and repetition that’s required in the wrestling room.

“I think it wasn’t as much a conscious decision as it was me being able to do it again,” Cormier explained. “If you think that for a second, I would have preferred not to have that grinding style of training camp, that’s crazy. I just couldn’t do it. Last time, my back was still so messed up, I could barely wrestle.

“I wrestled for a couple weeks leading into the fight. So when I took him down, that took so much damn energy cause I hadn’t done it. I was doing things that were so unfamiliar. Training camp last time was a lot of time spent boxing. Just trying to push as much as I could in the boxing. To be able to do everything again, it feels great.”

While there were a few minor injuries hampering Cormier at the start of his camp for the trilogy against Miocic, he was mostly healthy as he trained for what will be the final fight of his legendary career.

He called on old friends from the wrestling community to put him through those brutal training sessions that were required to help Cormier make two different Olympic teams. Not only did his body hold up but Cormier felt a resurgence in his execution as he got back to his roots.

“I started training back in Jacksonville. I just started really early,” Cormier said. “So by the time this thing is done, it will be over a three month training camp. I got ahead of it.

“I feel good physically. I just love the fact that I can get in a wrestling stance and hit shots and go wrestle. Something that I couldn’t do before and that’s very comforting in preparation.”

While wrestling has taken center stage in many of Cormier’s interviews and the details revealed about his game plan for the fight, he’s not trying to fool Miocic into believing that he’s going to spend 25 minutes defending his legs at UFC 252.

Cormier knows his wrestling has been an underutilized weapon that he needs to remove from the holster if he wants to retire as UFC champion but that doesn’t mean he’s suddenly afraid to throw hands with Miocic.

“The reality is for me to just go away from striking with Miocic would be a huge mistake,” Cormier said. “Because I’ve shown over the majority of the fight that I can outstrike him. I’m not going to abandon all my stand up, but I do want to make wrestling a focus. Am I going to be as wrestling heavy as Curtis Blaydes was? No, I’m not going to just be charging at him to take him down. I’m going to be using stand up to set up my takedowns and then the takedowns show themselves, I’ll get them.

“If not, I’m more than confident in my ability to box and kickbox this guy. I think the reason why the fourth round became so easy for him to land those body shots was because I was tired. I was making a lot of mistakes, and I was just boxing him. I wasn’t kickboxing anymore. I wasn’t kicking. I wasn’t kneeing. I was just straight up boxing. I’m not going to be doing that this time.”

Because this is his final fight, Cormier plans on leaving everything in the cage against Miocic, but he’s not going to call his shot or pretend like the job ahead of him is easy.

Whether it’s a first-round knockout or a grueling five-round war, all that matters to Cormier is getting his hand raised.

“Just win,” Cormier said with his prediction. “I’d love to win the fight over an extended period of time and show that without a shadow of a doubt, I’m better. My cardio failed me last time. There were a lot of factors why. No excuses though. He took a beating, he stayed in the fight and he got the job done. I respect that.

“I respect what he was able to do and stand up to some of the stuff I hit him with but the reality is I’d like to show that cardio’s no issue. It never has been and now all of a sudden it is now? I want to show that I prepared myself and with the ability to prepare myself as I always have, that if it’s 25 minutes, then it’s 25 minutes. If it’s 10 [minutes], it’s 10. It just doesn’t matter, I win the fight.”