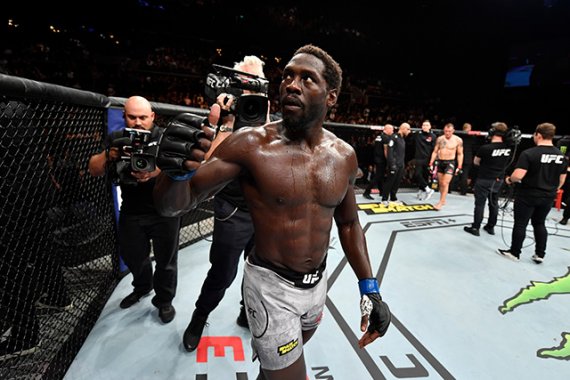 Jared
Cannonier heads into the
UFC 254 co-main event as the man targeted by reigning
middleweight champion Israel
Adesanya as the No. 1 contender-in-waiting.

However, before “The Killa Gorilla” can get his title shot, he must
first vanquish former title holder Robert
Whittaker on Saturday at the Flash Forum in Abu Dhabi.

“I have all the respect for anybody who’s competing in this sport.
If they respect, me I’m going to definitely reciprocate it,”
Cannonier said at a virtual media event on Tuesday. “I’ve said it
before, I’ve been a fan of Izzy before he was in the UFC. He
definitely sees guys coming up doing their thing, and I guess I
caught his attention. He vocalized that in front of the world and
now the world is eating it up.

“But I’ve got fights ahead of me and I’m not really resting on my
laurels based on what someone else says about me. I’m doing what
I’ve got to do to make sure I get what I want.”

Adesanya mentioned Cannonier after vanquishing Paulo Henrique Costa
in the UFC 253 headliner on Oct. 3. “The Last Stylebender” already
defeated Whittaker to claim the 185-pound belt in 2019, so it
appears that he is looking for a new challenge in the division.

“It’s good to be recogized by the champ, I suppose,” Cannonier
said. “In front of me is Robert — everything else is a
distraction.”

Whittaker also enters the matchup with some momentum. After losing
his belt and having a nine-bout winning streak snapped by Adesanya
at UFC 243, “The Reaper” returned to the win column with a
five-round verdict over Darren Till
at UFC on ESPN 14 on July 25.

It’s the second former champion Cannonier has faced after stopping
Anderson
Silva with a leg kick at UFC 237 in May 2019. Cannonier doesn’t
put on opponent on a pedestal based on past accomplishments.

“When I fought Anderson, I told myself I’m not fighting a former
champion, I’m fighting another man,” Cannonier said. “It’s gonna be
the same thing when I fight Robert. I’m not gonna make him more
special than what he is. He’s only a man. I’m only there to fight
the man. I’m not there to fight the image or reputation or anything
like that.”

Cannonier, who enters UFC 254 on a three-fight finishing streak,
was supposed to compete at UFC 248 before a torn pectoral derailed
those plans. Fortunately for him, his absence didn’t drop him in
the middleweight pecking order.

“I’m excited and I’m happy to be in this position. This is where I
was right before the injury happened and [I get to] pick up right
where I left off,” he said. “I’m very fortunate to still be in this
position and I’m ready to go get the job done.”

That said, Cannonier doesn’t feel any added pressure knowing that a
victory assures him of a championship opportunity in the near
future.

“It’s definitely motivating to know this win is gonna get me a
title shot. That’s the whole goal of being in the UFC is to be the
champion,” he said. “I’m not gonna put any extra pressure on me
because it’s a contender’s fight. A fight is a fight. Every fight
is a contender’s fight in my mind. I’m ready to get in there and go
to work.”