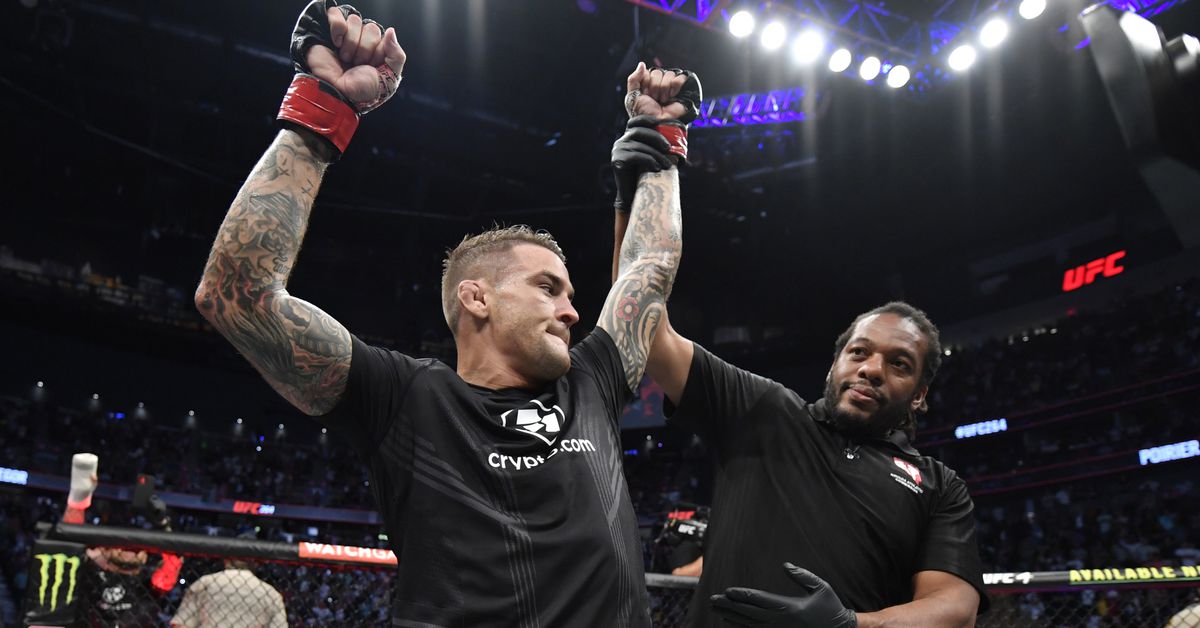 Dustin Poirier is as tired of all of the Conor McGregor talk as anyone.

“The Diamond” took a 2-1 series lead in his trilogy with McGregor when he won by doctor stoppage at UFC 264 two weeks ago. The bout was expected to end their rivalry, which dates back to 2014, but a broken leg suffered by McGregor at the end of round one that brought a close to the fight has left the window open for a potential fourth meeting between the two.

The possibility of another fight between the lightweight stars has also been boosted by the fact that McGregor continued to shout personal insults and threats at Poirier and his wife Jolie as they exited the octagon. McGregor has also said that he considers Poirier’s UFC 264 win to be “illegitimate” because of his injury.

Appearing on THE FIGHT with Teddy Atlas, Poirier addressed McGregor’s pre- and post-fight comments, essentially brushing them off as just talk.

“Right off the bat, mentally, I just feel like it’s weak,” Poirier said. “It’s weak. It’s excuses, but I’m trying not to read too far into it or go down these days of reading what videos are out and what people are saying because I’m back home with my family. It’s a win on my record. I know I did what I needed to do in my fight, pre-fight, my training camp. I crossed and checked all the boxes I needed to check, gave it my all, and went out there. Like you’re saying, it’s noise.

“Whatever people are gonna say or he’s gonna say, it just it is what it is. I’m healthy, I’m safe, I’m back home, I have another win on my record, and I’m still the No. 1 contender, so those are facts.”

Poirier now holds consecutive victories over McGregor, with those wins coming in a six-month span. He finished McGregor via strikes at UFC 257 in January, becoming the first fighter to accomplish that feat.

Following that loss, McGregor and his team cited a number of reasons why he was not at his best for that rematch, including the suggestion that he was distracted by a rumored boxing bout with Manny Pacquiao. It’s a notion that Poirier isn’t entertaining.

There was a distinct difference in how the second and third Poirier-McGregor fights were hyped as McGregor was cordial with Poirier ahead of UFC 257. However, ahead of UFC 264, McGregor was back to making outlandish threats and personal attacks that had been a trademark of some of his most memorable rivalries.

That carried over into the comments McGregor shouted at Poirier and his wife after the fight, which actually caught Poirier off-guard despite having interacted with McGregor as much as he has over the years.

“That was a little surprising,” Poirier said. “But this guy will go as far as—There’s no boundaries to this man’s talking and hype and stuff that he will do. I was surprised that with the broken leg he was sitting there still talking, but the things he said, I wasn’t surprised because he was talking crazy all week.

“Fighting is kind of, when you’re in the moment, in the eye of the storm, it’s kind of crazy, so I didn’t know his leg broke because we both were punching at the same time. He went down and I started punching him. I didn’t know his leg was broke until the bell rang and I started walking away and he was sitting on his butt, kind of holding his leg, and I saw that there was no—That his ankle, that his leg was kind of hanging. There was no resistance, there was no bone there, it was just a flap of skin there, that’s when I realized he broke his leg. As I’m walking to my corner, my cornerman walks in and we make eye contact and I said, ‘He broke his leg. This is over.’ But I didn’t know in the moment it was broken.

Asked if he felt that McGregor’s bluster has become essential to his brand, Poirier agreed that much of McGregor’s public persona could be an act, though he wondered what the authentic version of McGregor even looks like at this point.

“I think most of it,” Poirier said. “Ninety percent of it, ninety-five percent of it is. He’s an incredible entertainer that gets people interested in pay-per-views, that gets people interested in whatever product he’s coming out with next. And one of the best promoters that’s ever done it. I’ve never seen a promoter promoting something, lining up the next fight, sitting there holding a broken leg. It’s crazy.”

The good news for Poirier is that should he have to face McGregor again, it will likely prove to be another financial windfall for him as their third fight drew a reported 1.8 million pay-per-view buys. He acknowledged that all of this ongoing chatter can only benefit the fighters should they be matched up again.

If that fourth fight does happen, Poirier hopes that there will be no more excuses from the McGregor side. Poirier joked that the pictures McGregor released after UFC 264 to prove that he had a preexisting injury might have been part of a larger plan to save face.

“I can’t say if he did or did not have [an injury],” Poirier said. “You know in your phone, you can save your camera, like a file with pictures? He might have had a file with a bunch of ankle-wrapped up pictures that said ‘Plan B.’”