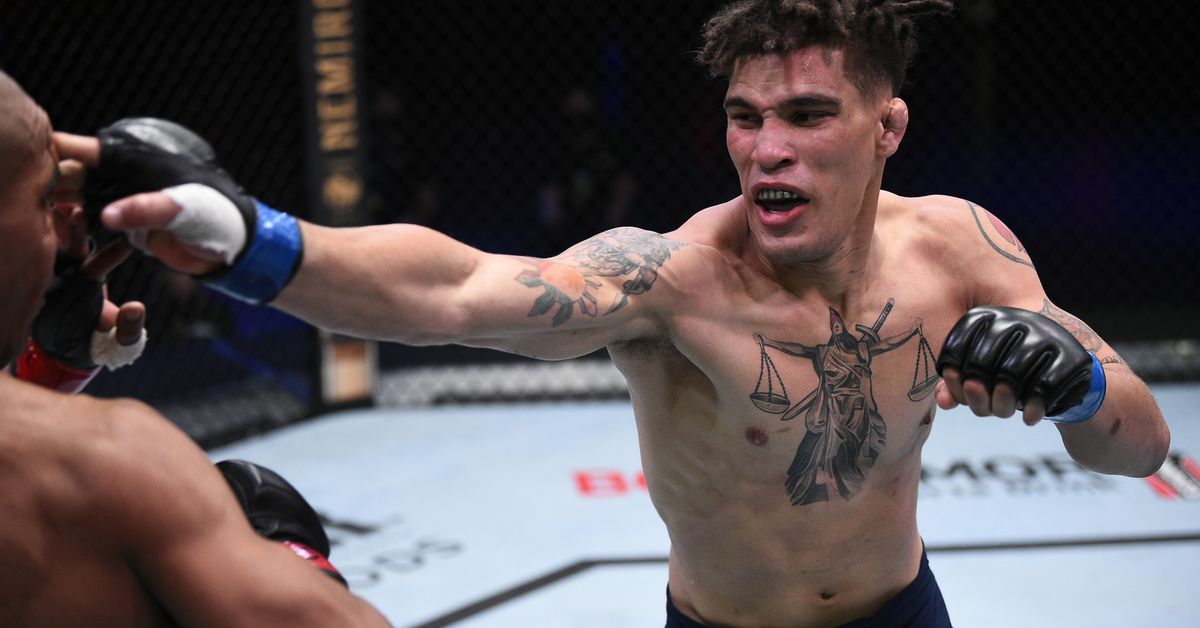 Jordan Williams ended Week 7 of DWCS Season 4 with a bang, stopping Gregory Rodrigues with thunderous punches at the 2:19 mark of the first round.

Twice denied a contract, middleweight Williams led the UFC papers handed out at the ESPN+ event on Tuesday at UFC APEX in Las Vegas.

“That bitter taste is far gone,” Williams said after screaming for his contract in the octagon. “I grabbed the mouthwash and I cleared everything out.”

Initially, it looked like Williams, who is a Type 1 diabetic, might not call the third time a charm. The visibly bigger Rodrigues, a training partner of Anderson Silva and Ronaldo “Jacare” Souza, bullied him and landed several punishing blows. But he left his guard momentarily down and took a left straight, which snapped back his head and set up a flurry of punches against the fence that forced referee intervention.

After a no-contest in his first outing and a controversial decision loss in his DWCS follow up, Williams is octagon-bound.

Check out the finish.

If there was a “Fight of the Night” on Week 7, it was the co-headliner between Anglin and Muhammadjon Naimov. The two delivered the round of the night in a wild rollercoaster of a third round that brought Naimov to the brink of unconsciousness before an incredible turnaround in the final seconds. It wasn’t enough to reverse a pair of 10-8 scorecards, but it left UFC President Dana White standing.

Anglin earned two scores of 29-27 and one 29-28 after a tough first round where the unpredictable Naimov cracked him with punches, forcing a clinch and takedown attempt. Naimov ran out of steam at the fight progressed, allowing Anglin to even the score in the second as he reasserted control on the mat and threatened a choke.

Cardio was the deciding factor in the third as Anglin landed in volume and repeatedly cracked with an uppercut. What Naimov lacked in stamina, he made up for in heart as he refused to go down, wobbling across the octagon and drawing several warnings from referee Mark Smith. When Anglin couldn’t put his opponent down with fists, he switched to elbows, and a sloppy takedown attempt nearly got him the choke when Naimov exposed his neck.

Every time Naimov looked like he was done, he found a way to survive. And with a slick turn out of trouble, he closed the frame elbowing Anglin in the face. Anglin, a betting underdog, was the obvious winner, but Naimov showed he’s tougher than the average fighter.

Michael Lombardo gets it done against Stephen Thompson lookalike

Lombardo had a handful to deal with in 6-5 karate specialist Korey Kuppe, and he did enough to win. It wasn’t must-see TV, but it got the job done.

There was more excitement after the fight as the brash Kuppe and Lombardo traded f-bombs after 15 minutes, requiring officials to mediate. Lombardo’s victory wasn’t in doubt, though, and the unanimous decision 29-28 scores for him were charitable to Kuppe.

A stylistic mirror image of Thompson, Kuppe wasn’t quite as sharp with his timing and couldn’t put the hurt on Lombard before giving up high-amplitude high-crotch takedowns. His long legs were well-positioned to tie up Lombard, and yet he wasn’t able to do more than stall or threaten a triangle as his opponent did just enough damage to hold position.

After berating his opponent, announcing to the UFC APEX that “no one wants to see that,” Kuppe had five minutes to turn things around. Instead, he was clinched and slammed to the mat. Lombardo held position and got another takedown to close out the show. He clearly wasn’t happy with his performance and promised to do better in his next try.

Every time Tennant stood still or failed to gauge range, Wolf’s sharp hands were on the money. Although rudimentary in the grappling skills Tennant forced her to use, Wolf managed to stay on her feet in the first featherweight DWCS bout, earning unanimous 29-28 scores.

Wolf even put Tennant in submission trouble in the final frame, jumping into a guillotine for several tense seconds on the canvas. She survived a late-round flurry in the second, recovering her composure after Tennant found a way around her guard with a right hook.

Tennant contemplated an early exit in the third after taking an inadvertent eyepoke, yelling in pain. She chose to continue and immediately drove Wolf to the fence. Although obviously more well-rounded, she could never quite use her weapons to expose Wolf’s shortcomings.

Driscoll picked up his seventh win in a row with a unanimous decision over Dinis Paiva, but he emerged from his first Contender Series fight with some thinking to do.

Cutting 25 pounds on 16 days’ notice, Driscoll ran low on gas and had to gut it out in deep waters for three 29-28 scores. But first, he was put on notice by Paiva’s right hand, which sat him briefly. In the clinch, he had better luck, and Paiva couldn’t reproduce the magic on his feet.

Save for an early Driscoll right hand, both fighters failed to get out of second gear in the middle frame. Unable to get the takedown, Driscoll led the dance in volume, and Paiva struggled to find his range. Neither landed a telling blow. Paiva turned that around in the third, when he landed another left that again sat Driscoll. After fending off a submission, Driscoll managed to reverse and close the bout with a competitive exchange of grappling techniques.