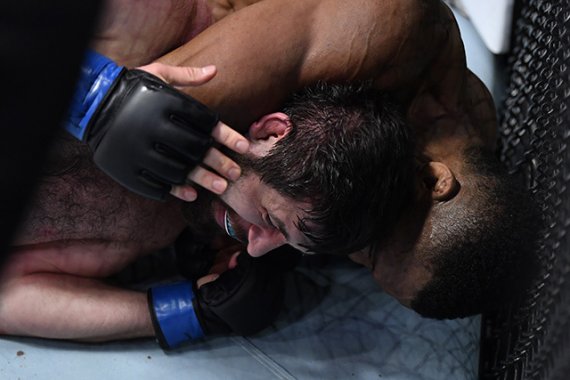 The LG System representative was one of five competitors to land

Ultimate Fighting Championship contracts on
Week 3 of Dana White’s Contender Series, as he submitted the
previously unbeaten Nasrudin
Nasrudinov in the second round of their light heavyweight
attraction on Tuesday at the UFC Apex in Las Vegas. Almeida (14-2)
drew the curtain 1:49 into Round 2, extending his winning streak to
nine fights.

“Malhadinho” pressured Nasrudinov (9-1) until he broke. The Russian
sambo practitioner conceded a takedown to Almeida in the first
round but managed to return to his feet and connect with a few
standing-to-ground punches. He was not as fortunate in the second.
Almeida executed another takedown, advanced to the back and
flattened out the Akhmat Fight Club export. From there, he hunted the choke, tightened his squeeze and
prompted the tapout.

Duraev put away Caio
Bittencourt with a neck crank in the first round of their
middleweight feature. Bittencourt (14-7) capitulated 3:29 into
Round 1, having been thoroughly dominated by the former Absolute
Championship Berkut titleholder.

The 32-year-old Duraev (14-3) put forth a superb effort in his
first appearance in more than three years. He struck for a takedown
and climbed to full mount inside the first 90 seconds, then went to
work with relentless ground-and-pound. Short punches softened the
fading Brazilian, who left his neck exposed and paid the price.
Soon after, Bittencourt found himself facedown and tapping the
mat.

Duraev now finds himself on a nine-fight winning streak.

Della Maddalena outstruck Sanford MMA prospect Ange Loosa to
a unanimous decision in a three-round welterweight barnburner. All
three cageside judges scored it the same: 30-27 for Della Maddalena
(10-2), who has rattled off 10 consecutive victories.

The Australian leaned on multi-punch bursts to the body and head,
kept Loosa (7-2) off-balance with stance switches and incorporated
occasional knees to the body. Della Maddalena escaped a tight
arm-triangle choke from the Titan Fighting Championship alum in the
second round, rose to his feet and hacked open a horizontal gash
near Loosa’s left eye with a standing elbow strike. Blood seeped
and then poured from the wound for the remainder of the match.
Della Maddalena fought through fatigue in Round 3, withstood a
takedown and closed with a flourish, unleashing with punches, knees
and a head kick in the waning seconds.

After a 6-0 start to his career, Loosa has lost twice in his last
three outings.

The Canadian set the tone with a strong first round, where she
grounded, pounded and nearly finished Polastri (8-3) with a
sustained barrage of elbows and punches. However, it was far from
over. The 23-year-old Brazilian rattled Jasudavicius with multiple
head kicks and did a much better job of staying upright across the
final 10 minutes. However, Polastri surrendered a takedown with
roughly 90 seconds left in the bout, remained on her back and
allowed her adversary to pile up points and control time.

Kotwica MMA’s Brzeski submitted Dylan
Potter with a rear-naked choke in the third round of their
heavyweight battle. Brzeski (9-1-1) brought it to a close 3:51 into
Round 3, even though there was legitimate controversy about whether
or not his opponent tapped. Replays showed he did not.

Potter (10-6) was ineffective for the entirety of the fight.
Brzeski broke down the CageSport champion with leg kicks and
thudding punches on the feet, but he did his best work on the mat.
He advanced to a mounted crucifix in the second round, cut loose
with elbow-laced ground-and-pound and appeared to be a shot or two
away from closing the deal. Neither man had much left in the tank
for Round 3. There, Brzeski scrambled to the back, trapped Potter in a
kneeling position along the fence and snaked his arms in place for
the choke.

Lewis (5-1) pieced together some success with leg kicks but could
not stay upright against the decorated amateur wrestler. Miller
executed repeated takedowns, applied his ground-and-pound and piled
up serious control time across all three rounds, turning the
contest into an exercise in futility for his frustrated
counterpart.