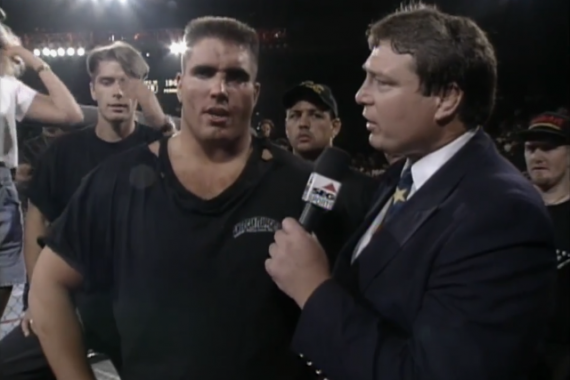 According to his Facebook, former UFC
fighter Paul Varelans passed away today after a long battle with
COVID.

I talked to Paul for a couple of my books and he was a fun guy with
a big sense of humor.

Will be missed. pic.twitter.com/xbfScMWPTg
— The OFFICIAL MMA Encyclopedia (@JESnowden)
January 17, 2021

UFC pioneer Paul
Varelans has died after a lengthy fight against COVID-19.

Varelans passed away due to complications from the virus on
Saturday, according to his Facebook
page. He initially revealed his COVID-19 diagnosis via social media
on Dec. 12. “Best way I can compare the feel of COVID-19 in my
experiance [sic] is it’s like fighting a guy who specializes in
kidney punches they never stop coming,” he wrote regarding the
illness.

Less than a week later, he was
placed on a ventilator in a medically induced coma at a
hospital in Atlanta. Varelans was 51 years old.

A 6-foot-8, 300-pound Alaska native who played college football at
San Jose State University, the man known as “Polar Bear” compiled a
9-9 mark over the course of a three-year mixed martial arts
tenure.

Varelans’ first fight came at UFC 6, where he knocked out Cal Worsham in
the opening round with an elbow before being outsted from the
bracket by David Abbott
in the semifinals. He returned at UFC 7, besting Gerry Harris
and Mark Hall
before falling to Marco Ruas in
the finals. Varelans would go on to square off against the likes of
Dan
Severn, Igor
Vovchanchyn, Kimo Leopoldo
and Mark
Kerr before his career was through.