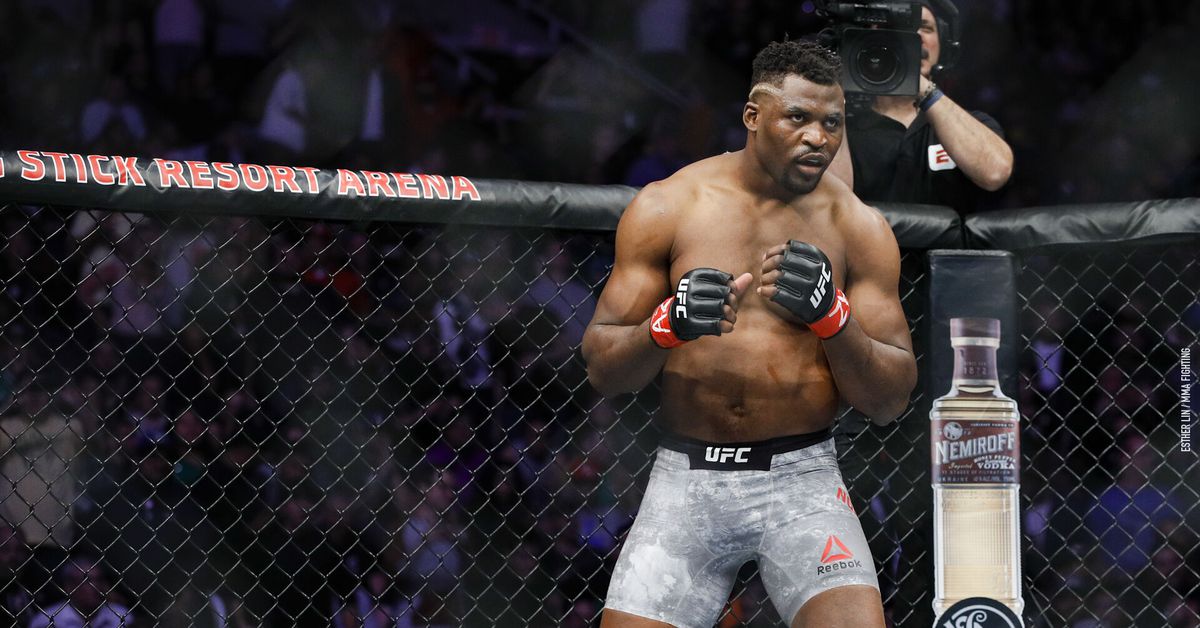 Francis Ngannou isn’t happy with how the UFC has portrayed him in his absence.

The reigning UFC heavyweight champion — and unanimous No. 1 heavyweight in MMA Fighting’s Global Rankings — is set for a unification bout with interim titleholder Ciryl Gane for UFC 270 on Jan. 22, but Ngannou’s intention wasn’t to be out of action for long after beating Stipe Miocic in March. He is particularly annoyed by the fact that in the build to Gane’s interim title fight with Derrick Lewis in August, UFC promos suggested that Ngannou would rather go on vacation than book his first title defense.

On The MMA Hour on Wednesday, Ngannou cleared the air on the situation, stating that he has no issue with Gane claiming a share of the heavyweight crown and that his problems lie solely with the UFC depicting him in a negative light to make the interim title fight seem more important.

“The only issue is how — because on my end, I know that was the way to apply pressure — it didn’t seem right,” Ngannou said of the marketing ahead of UFC 265. “I find it so awkward that it didn’t even bother me. I’m like, what’s going on? OK, let’s do it. What bothers me is the fact that to promote that fight they were trying to discredit me and pretend, ‘If you want to go on vacation, keep yourself and when you want to fight, we are here.’ No, I want to fight and I wasn’t on vacation. And they use a video from Embedded to play that game, to pretend to discredit me and show that I was on vacation.

“That bothers me because that’s not right. I know that is not true, it’s just to discredit me, to control the narrative. I don’t have a problem if they want to do the interim, just do the interim without sabotaging me.”

Making matters more confusing for Ngannou is the fact that he was looking to fight again before the end of the year, but was told that the major July and August events were already taken care of. A proposed June date was too early for Ngannou, both because he was still in the midst of sorting out visa issues that he had to leave the U.S. to deal with and because it was a relatively quick turnaround for a champion.

Ngannou became heavyweight champion in March with a spectacular knockout of Miocic and also wanted to have a little time to celebrate.

“Not to mention they have to give me at least time to maybe go home and introduce the belt for my people, for my country, for my family,” Ngannou said. “Why was the rush so bad? In the past two years I have fought twice and suddenly I have to defend my title after two months? What is the rush? What’s wrong? Why can’t I have the average time as everybody, three or four months?”

Ngannou added that the UFC has been wanting him to sign an extension, which he and his team aren’t interested in doing at this time, at least not under the current proposed terms. However, he is also aware that his champion status and the UFC’s ability to extend his contract as long as they continue to offer him fights within a reasonable period of time make it so that his options are more limited than some might think.

For now, the plan is for Ngannou to make a more concrete decision after he fights Gane in January. Ngannou noted that, as far as he knows, he will not be a free agent after Jan. 22, win or lose.

“What doesn’t work for me, because I don’t feel protected in those terms — in the past two years I fought twice and I have to borrow money to live. Nobody cares about that. I have no guarantee and I have no protection, so based on that experience I want to get something better, better terms on my contract, and obviously paid what I deserve.”

Despite the less than ideal circumstances that Ngannou is currently competing under, when prompted he admitted that he would welcome sticking around with the UFC. Ngannou joined the promotion in 2015 and has since become one of its biggest stars, with highlight-reel wins over a who’s who of heavyweight greats.

“The UFC is a beautiful and nice promotion,” Ngannou said. “I love being in the UFC. The only part that is challenging now is behind-the-scenes part. But fighting, I love it. That’s for sure, I love the promotion, that’s not questionable. I still hope that this works out. I still hope, I wish that it would work out. In the meantime, if it doesn’t work out, I can’t do anything.”

Ngannou brings a five-fight win streak into his next fight and a loss would change his career options considerably, both because it would at least free him from a champions clause and possibly put a dent in his star power. Presumably, the UFC would be greatly interested in keeping the power-punching heavyweight around.

Should that be the case, Ngannou revealed that one thing he is looking for is proper recognition from the company, which in his opinion has been lacking as of late.

“Honestly, that’s not the feeling that I have,” Ngannou said when asked if he feels the UFC is committed to being in business with him. “I might be wrong, but I don’t feel that because in my opinion for right now, from what I’m seeing, the UFC is trying to discredit me. That’s what I know. And those promoting somebody cannot work together with discrediting him. You don’t do that to somebody that you want to promote.

“What do I look for?” Ngannou later added. “First of all, I look for some respect, that’s to start. Then I look to get stuff right, I look to feel like I’m respected, to feel like they care at least. That’s it. I never asked for anything more than that. That would be enough for me. … I gained the position that I am at. I wasn’t nominated, I wasn’t assigned to be here, I earned it. So that means I deserve a little bit of respect, just a little bit. I’m not a big deal, just a little famous, that’s it. (Laughs).”