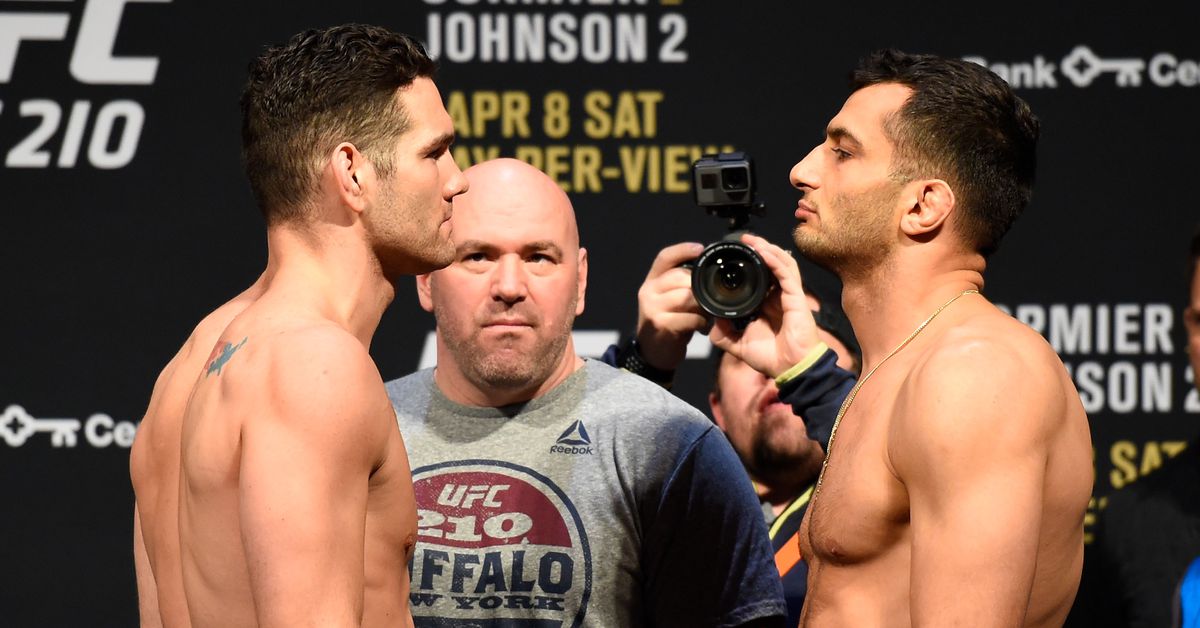 Gegard Mousasi isn’t one to tell a fellow fighter what to do with their career, but he’s also honest. If he’s asked a question, he’s going to answer it. And when the topic comes to Chris Weidman, who Mousasi defeated in 2017, the Bellator middleweight champion can’t help but feel for his old opponent who suddenly finds himself at a career crossroads.

Weidman is still in recovery after suffering a devastating broken leg in his April loss to Uriah Hall. Weidman sustained a fractured right fibula and tibia as the result of a checked leg kick. In July, he revealed that he’s expected to undergo another surgery to correct his fibula bone, because, in his words, “the bones aren’t healing the way it’s supposed to.”

Weidman is 37 years old and has expressed a desire to return to MMA once he’s healthy enough to do so. Mousasi wonders if that’s really the right call.

“It’s not nice to see a fight like that. You don’t wish that on anybody,” Mousasi said on MMA Fighting’s What The Heck ahead of his Bellator middleweight title defense against John Salter, which takes place Friday at Bellator 264 in Uncasville, Conn.

“If it was me and if I had 29 surgeries, I would say this is not good. And especially if you get knocked out three or four times in a row, and then you break your leg in a bad way where it’s going to take a year to recover, at this age — he’s a little bit older than me I think, 37 maybe, and he’s going to come back at 38 or 39 — it’s difficult to come back. And then how long are you going to continue? At 38 or 39, you’re over your peak. You know what I mean?

“It’s not like you’re going to get better, especially coming [off] losses, losses, losses,” Mousasi continued. “That’s my opinion — I wouldn’t continue. If I had a serious injury like that, I would right away stop fighting at his age. At his age, I would retire.”

Mousasi is correct in that Weidman was already struggling prior to the injury. After starting his career with a 9-0 UFC record that saw him capture the 185-pound title, defend it three times, and twice defeat legendary middleweight Anderson Silva, Weidman has lost six of his last eight fights dating back to late 2015. He’s been finished via KO/TKO in all six of those losses, with several of them being brutal knockouts, including his fight with Mousasi.

Depending on the length of his recovery, Weidman will likely be nearing 40 years old by the time he makes his octagon return. Mousasi doesn’t doubt whether it could be done. He just believes the mental trauma of the injury is something that may never go away.

“When I was younger, I would go in there, I would never think about injuries and whatever because everything was going well,” Mousasi said. “But if you have many fights and you get injured and you have setbacks and whatever, and then when you have to fight, you take those experiences into the fight, so it’s a little bit more difficult. And I think for him also, if you have an injury like that, it will always be a trauma.

“Even if he comes back, it will always be in the back of his mind, ‘I can get injured, something bad can happen to me.’ So that’s why I’m saying, at his age, it’s more difficult. I don’t say it cannot be done, but it’s [more difficult].”