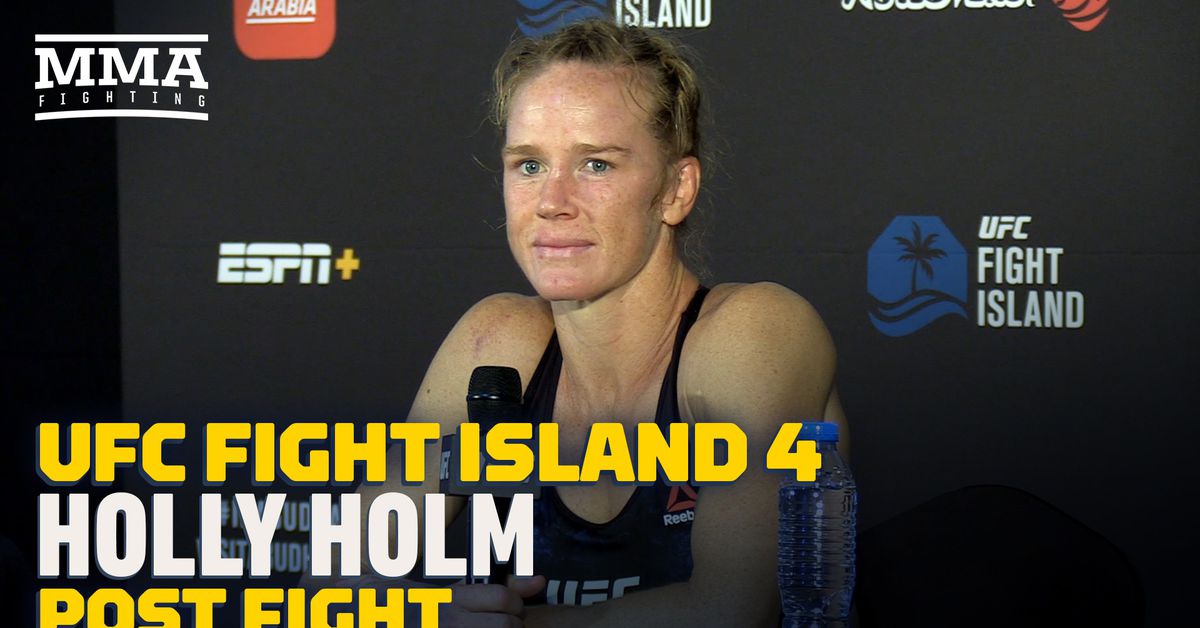 The name on everyone’s lips after Holly Holm’s dominant win over Irene Aldana at UFC Fight Island 4 was another successful bantamweight on the card: Germaine de Randamie.

Holm wasn’t opposed to the idea after picking up her second straight win and beating back a top contender at Saturday’s event. But she’s not banking on a rematch with “The Iron Lady,” who outpointed her three years ago in a fight for the inaugural UFC women’s featherweight title.

“That’s definitely an option,” Holm told reporters, including MMA Fighting, after the fight card on Fight Island in Abu Dhabi. “That’s something that I think everybody felt like her and I would meet up in there again. So we’ll see where it goes from here.”

There was no denying the vets’ brilliance at the event. Holm fought circles around Aldana, denying the Mexican fighter a single round on the card, while De Randamie put Julianna Pena to sleep with a guillotine choke.

Previously, De Randamie stumbled in a bid to re-take the featherweight belt, losing a lopsided decision to Amanda Nunes.

Now, with two-division champ Nunes taking time off after the birth of her daughter, and next set to defend her featherweight belt against Megan Anderson at UFC 256, it appears there’s going to be a delay before the bantamweight belt again goes up for grabs.

Nunes has also flirted with retirement with few challenges unconquered her divisions.

Of course, Holm would like to conclude a decorated career in combat sports with another title, and her win over Aldana ensures she will stay in the running. She’s fallen short on three separate occasions against the toughest women in the world, but she isn’t ready to give up the chase.

“I’m going to keep working hard,” she said. “That’s all I’m going to do. I know she’s got a lot going on right now. Another fight already scheduled, and there’s still some other tough girls in our [division]. I feel like the 135-pound division is always pretty stacked, so I don’t ever get my sights set on something too hard. The next fight is the next fight, and whoever it will be, I’ll put my heart and soul into it.”

In her final round opposite Aldana, Holm let out a scream as she battered her opponent with a flurry of punches, threatening a stoppage. For a fighter who pulled off one of the biggest upsets in the sport’s history with a knockout of Ronda Rousey, only to stumble repeatedly in big fights, it sent a message to the rest of the bantamweights in the division.

Close, in this case, was more than good enough.

“We almost got her,” Holm said.