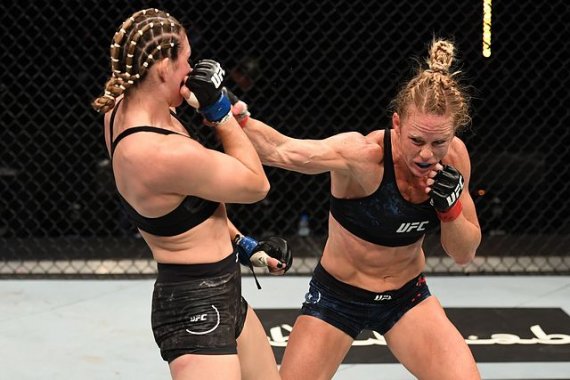 Former UFC and boxing champion Holly Holm
will be part of the broadcast team for Claressa Shields’ next
fight.

Holm will help to commentate the boxing event “Superwomen: Shields
vs. Dicaire,” which takes place on March 5 at the Dort Financial
Center in Flint, Michigan. The headliner will see Shields (10-0),
the WBC/WBO super welterweight world champion, lock horns with IBF
super welterweight champion Marie-Eve Dicaire (17-0) in a 154-pound
unification bout. The card airs on Fite.TV
at 9 p.m. ET/6 p.m. PT.

Holm will share the host desk with Dan Canobbio and will also serve
as the evening’s unofficial scorer. Before she transitioned to
mixed martial arts, Holm compiled a 33-2-3 mark in professional
boxing while winning titles in multiple weight classes.

“These are the top media professionals that this historic night for
female boxing deserves,” promoter Dmitriy Salita said in a release.
“Holly Holm is one of the most popular female fighters in history
and she’ll be lending her unique insights.”

Shields has been training alongside Holm at Jackson-Wink MMA with
designs on transitioning to MMA. Shields
recently signed with Professional Fighters League and is
expected to make her debut with the promotion at some point in
2021.

Holm will return to the Octagon at UFC Fight Night against Julianna
Pena on May 8. The former bantamweight queen has been
victorious in her last two promotional appearances.