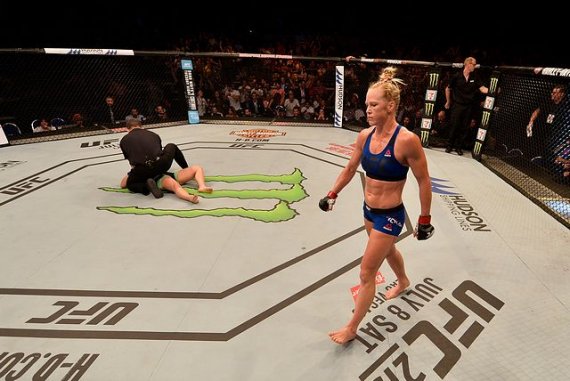 Holly
Holm has confirmed her withdrawal from proposed May 8 bout
against Julianna
Pena.

In a video on Instagram, the former bantamweight queen revealed
that she was diagnosed with a kidney condition called
hydronephrosis. According to kidney.org,
“hydronephrosis is the swelling of a kidney due to a build-up of
urine. It happens when urine cannot drain out from the kidney to
the bladder from a blockage or obstruction. Hydronephrosis can
occur in one or both kidneys.”

Holm said that she expects to make a relatively quick recovery and
hopes to have the Pena fight rebooked by the summer.

“Last Wednesday I had super abdominal pains, and I went to urgent
care. It’s been something kind of reoccurring but hasn’t driven me
to urgent care until last Wednesday,” Holm said. “Lo and behold I
have hydronephrosis, which is where the kidney does not drain to
the bladder correctly.

“So they admitted me that night to get a little procedure done, to
get a stent put in there. But I do need to get it fixed
permanently. The good thing is it’s a very fast recovery. They say
four to six weeks, so it can’t be too long. The sooner I can get
in, the sooner I can get out, the sooner I can be training and
hopefully we can get this fight postponed a few weeks….I am doing
fine. Thank you so much for the messages.”

Holm enjoyed a productive 2020, posting unanimous decision
victories over Raquel
Pennington and Irene
Aldana. Pena, who has won six of her eight Octagon appearances,
called out Amanda
Nunes shortly after learning of Holm’s exit. The promotion has
not made an official announcement regarding Holm vs. Pena as of
this writing.