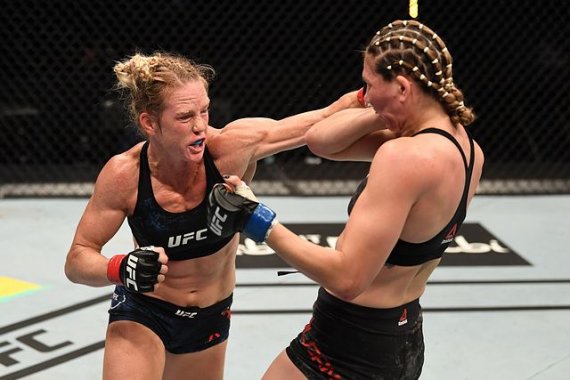 Holly
Holm has been forced to pull out of a UFC Fight Night clash
with Julianna
Pena on May 8.

Pena herself initially brought word of Holm’s exit from the card
via Twitter on Saturday night. According to a report from the

Albuquerque Journal Holm canceled a boxing
commentary gig on Friday involving a Claressa
Shields fight due to a “nagging physical issue.” The nature of
the ailment was not disclosed, but apparently it was enough to also
prevent her from facing Pena in approximately two months.

Love watching these title fights. One in
particular…
as I’ve just been informed that
#HollyHolm is injured and has pulled from our scheduled bout
May 8. I wish her a full recovery
#ufc259

It’s unclear if Pena will remain on the card, but “The Venezuelan
Vixen” didn’t hesitate to call for a matchup with two-division
champion Amanda
Nunes, who shellacked Megan
Anderson to defend her featherweight belt in the the UFC 259
co-headliner.

Nunes didn’t seem especially interested in the possibility when
informed of Pena’s callout.

“So Holly is off, she [Pena] can fight Germaine,” Nunes said at the
UFC 259 post-fight press conference. “I feel like she has to get in
the mix, but we’ll see. I’m going to go back down, I’m going to see
my diet because now I’m pretty heavy, so yeah. I’m a champion. I’m
never going to turn down fights. I’m going to be facing whoever
Dana White wants me to face.”

The May 8 UFC Fight Night card doesn’t yet have an official
headliner or location.