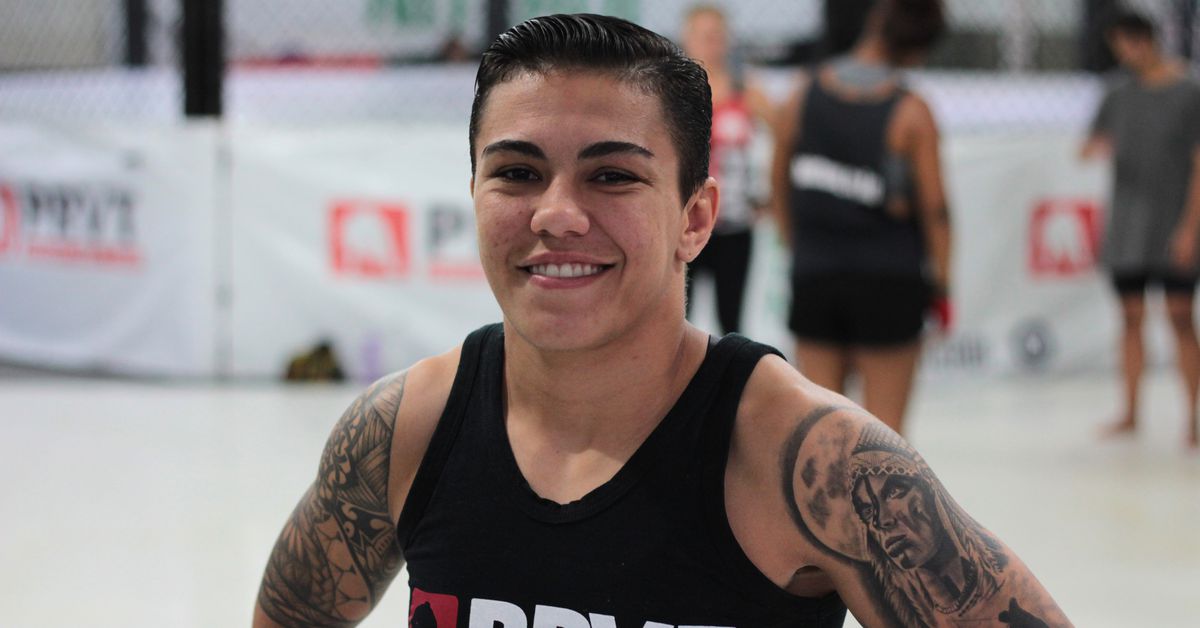 Moving up to flyweight meant the easiest weight cut for Jessica Andrade since her bantamweight days, and a victory Saturday could catapult her into another title bout.

“Bate Estaca” agreed to move up to 125 pounds after losing a rematch to Rose Namajunas in July, and found herself matched up against No. 1 contender Katlyn Chookagian at UFC Fight Island 6 in Abu Dhabi. Andrade feels “happy” with a less restricted diet, and welcomes the idea of challenging for the flyweight gold next.

“I’m feeling fine, I’m feeling stronger, and that’s been a huge difference for me,” Andrade said in an interview with MMA Fighting. “Fighting Katlyn Chookagian will be great for me. I’ve always wanted to fight the best and she’s the No. 1 at 125 behind Valentina (Shevchenko), and she just beat her sister, so she’s a great fighter. I think (a win) gets me up in the rankings.

“I’m making history as the first woman to fight in three weight classes (in the (UFC) and I find this so cool. I’ll be ready for this fight. She’s a tough opponent, I don’t underestimate her. She has a long reach and works with good kicks and submissions, so she’s a dangerous opponent, but I’m happy because I’ve always wanted to fight the best and I’m having the opportunity of doing this again in all weight classes. It’s a new challenge and a new way for me to grow, and, who knows, maybe I’ll have a shot at the belt next.”

“I’m no longer saying ‘I will only fight in this weight class’ because I told the UFC I’d be ready to fight at 115, 125 or 135 if they needed me. Right now, I believe that the UFC would give me a chance to fight for the belt with Shevchenko or Jennifer (Maia) with a big win over Katlyn Chookagian.”

Shevchenko will put her title on the line in the co-main event of UFC 255 on Nov. 21, and Andrade is cheering for the fellow Brazilian even though “Valentina is one of the best fighters not only at 125 but in every weight class.” Andrade believes Maia “would have to do a completely different game” at UFC 255 to capture the belt.

“Bate Estaca” says “every fighter that dreams of fighting with the best wants to fight Valentina,” and she’s confident she has deciphered the path to dethrone the Kyrgyzstani talent.

“To beat Shevchenko, you’d have to close the distance and work with strikes close to the cage to take away her energy, her strength, and work with the ground and pound or something like that,” Andrade said. “She works well on top, but shakes a lot off her back while trying to get back up, so you’ll need someone as strong as her and that knows how to stop her on the ground.

“You can’t give her space. Valentina needs space, she’s fast. Even though she’s not lengthy, she needs space to have enough punching power and throw her kicks. The strategy to beat Shevchenko would be to work non-stop and be all over her, striking the entire time, grabbing her to tire her out, and then work a different game plan on the next rounds. I think that’s the best strategy to beat Shevchenko, but anything can change when the time comes.

“That’s something I do really well, and most girls can’t do, and they give Valentina too much space. Valentina gets better as the fight progresses, so you have to bring hell at all times, otherwise she gets too comfortable between rounds.”

Andrade is confident that her hands will be the key to beat Chookagian and then whoever holds the flyweight championship, especially now that she’s not “suffering” that much to get down to 115 pounds.

“I’m more powerful now,” Andrade said. “If Claudia Gadelha said I was too strong for strawweight, that I was as strong as bantamweights, she’d say I’m as strong as featherweights now [laughs]. Girls felt my power at 135, so I believe I can cause the same effect at 125. I’m very strong and I have enough cardio for three or five rounds if I have to. They will feel my punching power.”