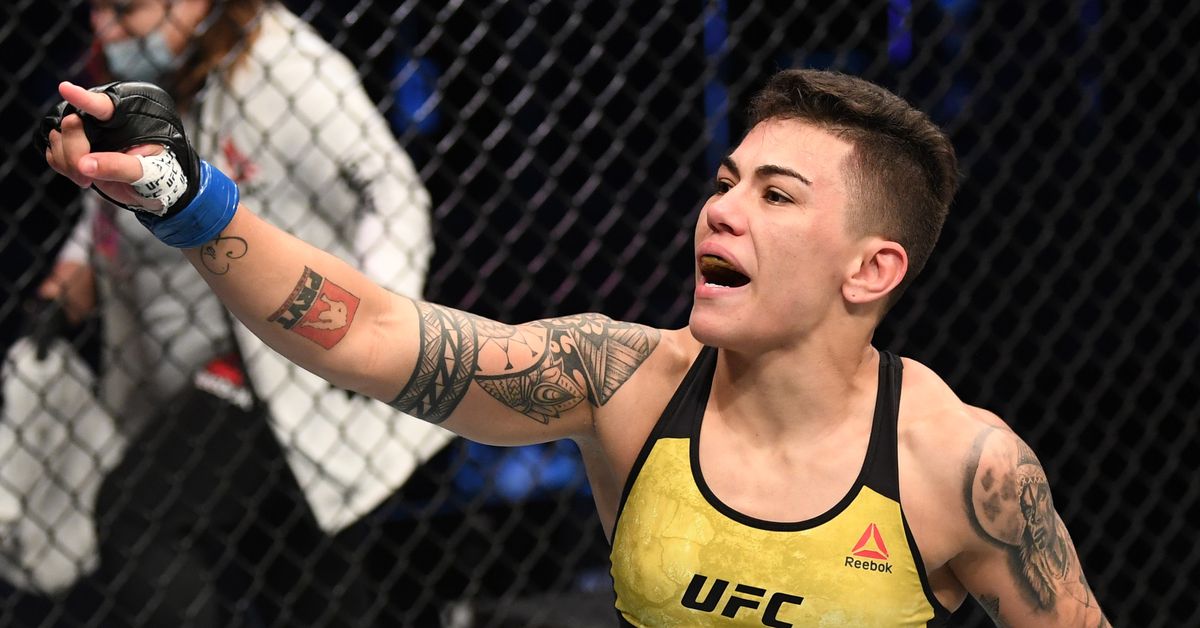 Competing inside the octagon at 125 pounds for the first time on Saturday, Andrade leapfrogged the flyweight division’s contenders’ line with a first-round finish of Katlyn Chookagian in the UFC Fight Island 6 co-main event.

The victory made Andrade the first woman to have her hand raised in three UFC weight classes and also put her in position to potentially challenge the winner of November’s flyweight title clash at UFC 255 between champion Valentina Shevchenko and Jennifer Maia.

Andrade previously held the UFC’s strawweight title and fought at 135 pounds before that. Should she eventually step into the path of “Bullet”—a fighter who has never lost competing at 125 pounds—she welcomes the challenge.

“I think I can put up a fight against Valentina,” Andrade said via a Portuguese translator at the evening’s post-fight press conference. “It’s something that should have happened already in other organizations so I think I’m gonna make a difference in this and put on shows in this division.”

Given the volatile nature of the UFC’s busy schedule as it bounces between Abu Dhabi and Las Vegas in the midst of a pandemic, Andrade was asked if she’d be open to stepping in as a replacement at UFC 255 should Shevchenko or Maia be forced to withdraw for some reason.

Not only did Andrade answer in the affirmative, she added that she’s available for bookings at bantamweight and featherweight as well.

“For sure, I’m gonna stay ready,” Andrade said. “If that happens I’ll be there if needed. In any other division, 135, 145, I’ll be ready. I haven’t felt this happy and haven’t had this vigor to fight and I just felt really good tonight.”

There’s also the possibility that Maia defeats Shevchenko and if that’s the championship matchup that awaits Andrade, she’s interested in that as well especially since Maia actually holds a win over Andrade. The two fought in Brazil in December 2012 and it was Maia who earned a unanimous decision victory.

“I’ve lost to her before we were in the UFC, so it would be interesting to go in there,” Andrade said. “I know I’ve improved a lot, Jennifer’s improved a lot, so that’s the point. There’s a lot of things that make sense in this division. Fighting Valentina makes sense, fighting Jennifer Maia, so it’s a good addition to the division.”

Andrade has proven that she can compete at almost any weight, which makes her a valuable asset as the UFC continues to fill its event lineups for the next few months. Whether Andrade fights again before the end of the year or not, she’s just happy to have established herself as a contender once again in a new weight class.

“We’ll fight wherever, Andrade said. “Maybe with this fight, Jennifer Maia and Valentina, the UFC’s gonna want to have me have another fight. But I’m the person to do the movement in this division. It’s exactly what this division needs, it needs to be stirred around a little bit.”