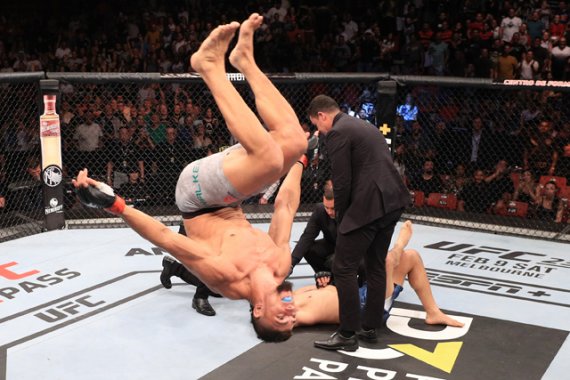 A light heavyweight clash between Johnny Walker and Nikita Krylov is in the works for UFC Fight Night in Brasilia, Brazil on March 14.

ESPN was first to report the matchup. UFC Brasilia takes place at Nilson Nelson Gymnasium and is also expected to include a clash between Paige VanZant and Amanda Ribas. A headliner has not been announced for the card.

Walker kicked off his promotional tenure with first-round finishes of Khalil Rountree, Justin Ledet and Misha Cirkunov before being stopped in the opening stanza by Corey Anderson at UFC 244 on Nov. 2. The 27-year-old Brazilian is 17-4 as a professional and has finished all but one of his triumphs inside the distance.

Krylov, meanwhile, is 1-2 during his second stint with the Las Vegas-based promotion. Most recently, “The Miner” dropped a split verdict to Glover Teixeira at UFC Fight Night 158 on Sept. 14. The Ukraine native is 7-5 in the UFC and 26-7 as a professional overall, with all of his wins coming by knockout, technical knockout or submission.