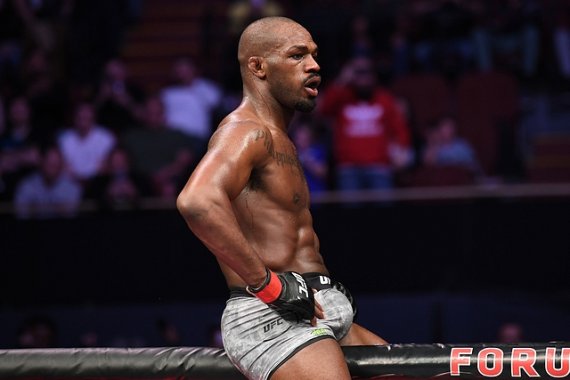 It appears that the troubles for “Bones” are far from over.

On Wednesday, Jackson-Wink MMA coach Mike Winkeljohn revealed that
former Ultimate Fighting Championship light
heavyweight champ Jon Jones is
no longer part of the team. The decision came after Jones was
arrested for battery domestic violence in September while in Las
Vegas to be inducted into the UFC Hall of Fame for his epic fight
with Alexander
Gustafsson at UFC 165. Jones was arrested on Sept. 24 after he
allegedly assaulted his fiancée. He was released 12 hours after his
arrest and is scheduled to appear in court on Oct. 26. It was just
the latest addition to Jones’ police record, which includes several
DWI offenses, and it seems that it was more than Winklejohn could
take, as the coach asked his former protégé to stay away from the
gym until he addresses his alcohol problem.

“I have a wife and three daughters, I teach women’s self-defense
called Smart Girls self-defense,” Winkeljohn said on The MMA Hour. “It
just makes it hard when he keeps getting in trouble. I just had a
conversation with him. I said, ‘Jon, here’s the deal, man. You’re
like my little brother. You have to stop drinking and fix these
things for a certain period of time until you come back to gym.’ So
at the moment, he’s out of the gym. He’s not allowed to come to the
gym because I feel I had to do that. Ignoring it and expecting
different results, as they say, is insanity.”

Winkeljohn also lamented that Jones has too many “yes men”
surrounding him who influence his life negatively. He stated his
belief that “Bones” has the strength to get out of the sticky
situation, but that for now, it’s better to keep some distance
between him and the rest of the Jackson-Wink MMA team.

Jones took to his socials to share his version of the story. His
first message, subsequently deleted, contained words of gratitude
and a promise that his journey would continue.

“Had a heartbreaking conversation over the phone with one of my
longtime coaches last night, really hurts to lose the support of
someone I respect so much,” states a capture of Jones’ post,
archived on
Reddit. “Sincere thank you to the rest of the coaches for
staying in the fight with me. Our journey continues…” In another
pair of tweets, Jones then claimed that he had never assaulted his
fiancée and stated that he’s ready to quit alcohol for real.

“I love how people are imagining the worst possible situation in
their heads and making it somehow factual,” Jones wrote. “I never
hit my fiancée and our daughters were woken up after our
confrontation. My daughters didn’t see or hear us arguing. That’s
really the only thing I care to clarify.. outside of that, looking
forward to moving forward without alcohol. It’s the first time in
my life where I’m actually ready to quit. Glad to have the support
of my fiancée, family friends and fans”

I love how people are imagining the worst
possible situation in their heads and making it somehow factual. I
never hit my fiancé and our daughters were woken up after our
confrontation. My daughters didn’t see or hear us arguing.

That’s really the only thing I care to
clarify.. outside of that, looking forward to moving forward
without alcohol. It’s the first time in my life where I’m actually
ready to quit. Glad to have the support of my fiancé, family
friends and fans

The last time he stepped into the Octagon, Jones took a unanimous
decision from Dominick
Reyes in the UFC 247 headliner, winning his 14th title fight at
205 pounds. Shortly afterward, he relinquished the light
heavyweight belt to move up to heavyweight, but hasn’t competed
since.