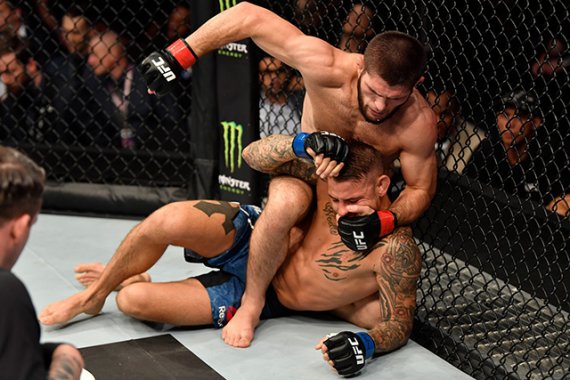 Khabib
Nurmagomedov may very well return to the Octagon to pursue a
30-0 record, but he doesn’t appear to be interested in a rematch
with either Conor
McGregor or Dustin
Poirier.

Nurmagomedov held a press conference in Russia on Wednesday to
announce the launch of his own MMA promotion, Eagle Fighting
Championships. During that session, he addressed the possibility of
a UFC return and what will happen when he meets with Dana White.
The UFC president has said he expects the lightweight champion to
return for one more fight and plans to meet with Nurmagomedov in
Abu Dhabi in the coming weeks. Nurmagomedov announced his
retirement in the cage following a victory over Justin
Gaethje in the UFC 254 headliner on Oct. 24.

Nurmagomedov, who already owns submission wins over McGregor and
Poirier, doesn’t believe he has much incentive to face either man
again. McGregor and Poirier will meet in a rematch at UFC 257 on
Jan. 23.

“First, he will probably offer money,” Nurmagomedov said of White
(translation
via MMA journalist Igor Lazorin). “What for? I choked both
[McGregor and Poirier]. Why should I do this?”

Nurmagomedov’s matchup with McGregor at UFC 229 is believed to be
the promotion’s highest selling pay-per-view of all time with more
than 2 million buys. However, financial rewards alone are not
enough to motivate “The Eagle.”

“Yes, only money. There is no sports interest there,” Nurmagomedov
said. “I choked both of them, both were champions, both surrendered
to me. As our proverb says: a horse doesn’t run until the donkey
wins. Donkeys don`t even take part in competitions where horses
run. I have no interest in fighting against these opponents.

“Imagine UFC offered you $100 million. This is already a problem.
But there is no sports interest there.”