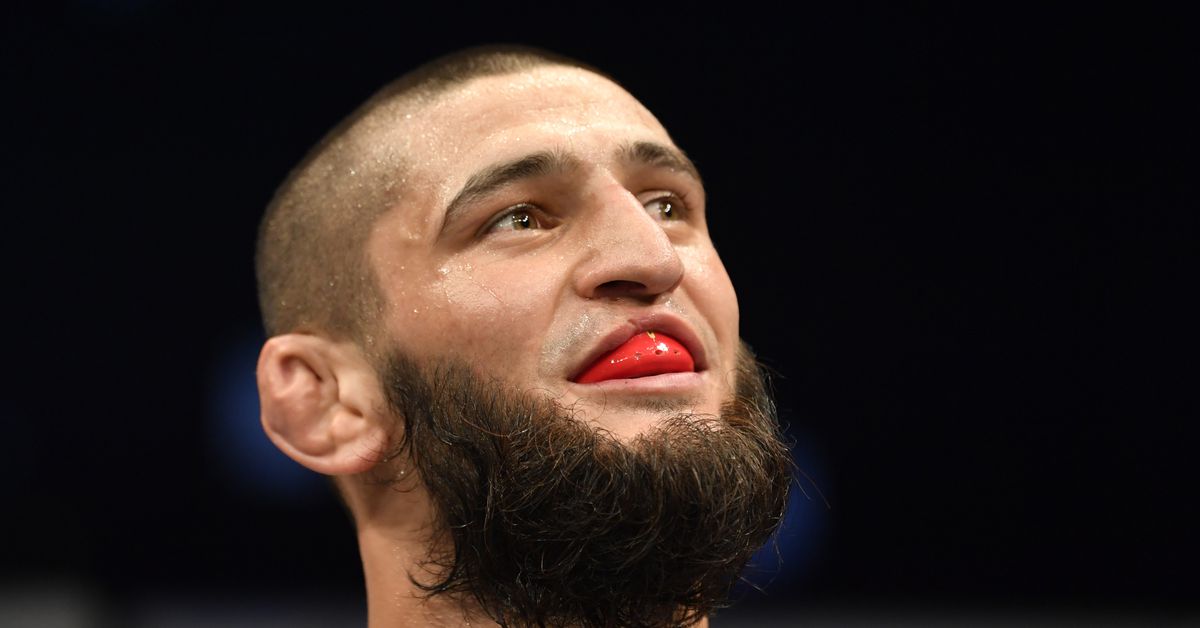 Highly publicized prospect Khamzat Chimaev and his upcoming opponent Gerald Meerschaert are about to do battle on Saturday night at UFC Vegas 11. But the middleweights ended up running into each other at the host hotel ahead of the event.

According to undefeated Russian, he ran into Meerschaert and decided to give him a piece of his mind after hearing interviews with the Duke Roufus-trained fighter leading into their fight.

“He was here – I met him,” Chimaev revealed during the UFC Vegas 11 media day. “I said he speak too much, he talk too much in the media. He disrespected me.

“He think I didn’t like that, but I said to him you like to talk too much. He said, ‘Yeah,’ I said I’m going to smash your face, chicken. He said nothing.”

For his part, Meerschaert had a slightly different take on the encounter after he said Chimaev starting talking to him while surrounded by his team.

“We passed each other in the hallway earlier today – it was pretty quick,” Meerschaert said. “He tried, I think he was trying to talk trash to me. He just kept saying, ‘don’t talk too much’ and I was kind of like ‘OK, we’re fighting Saturday, we’re not going to do anything now’ because I want to make money. I don’t know what his deal is.

“Not only that, but I don’t think it’s a very cool thing to flex when you’ve got a bunch of your friends with you and stuff. Like I had one guy with me, he had a bunch of guys with him. Dude, I get it. You don’t have to like me, I don’t have to like you but let’s just save it for the cage.”

Despite Chimaev’s irritation, Meerschaert said he doesn’t quite understand what had his upcoming opponent so rattled when he hasn’t talked that much about him in the days leading to their fight.

Meerschaert has expressed frustration that the UFC booked their fight for UFC Vegas 11 with Chimaev already in talks for a potential showdown against former welterweight title contender Demian Maia looming in the near future.

“Really, I haven’t said anything bad about him,” Meerschaert said. “He’s just angry for no reason. For me, it’s like, dude, you’re looking past me.

“You’re the one that needs to put some respect on my name and acknowledge when you’re fighting a guy that has 40-plus fights – might be more than a handful.”

For his part, Chimaev didn’t understand why that bothered Meerschaert so much because he’s not looking past anybody as much as he’s just planning ahead.

“I don’t know why it’s disrespectful,” Chimaev explained. “In amateur boxing, people go like five or six fights, but I go fight here and [fight again] after one month. But I did it in 10 days, two fights. I don’t know why he feels disrespected, something like that.”

Regardless of the reasons, the pre-fight incident really didn’t make much sense to Meerschaert, who saw it more as an unnecessary confrontation when they are only days away from settling their differences in the octagon.

“I don’t really care,” Meerschaert said about the situation. “Like I said, I don’t think I’ve actually said anything bad about him, so I don’t know why he was so upset, or if he thinks that makes him look like a tough guy or whatever. It’s water off my back.

“I don’t really care what he’s going to say, because we have a contract in place that says on Saturday night, they’re going to lock that cage door and we get to figure it out ourselves.”

As far as the fight prediction goes, Meerschaert believes Chimaev might be in for a surprise considering he’s competing against the most experienced opponent of his entire career while also facing a legit middleweight this weekend.

“He’s got the height of most middleweights, but he’s really skinny,” Meerschaert said about Chimaev. “He is not that thick of a guy. If nothing else, I don’t understand — and I’m sure he believes it — how he believes that he’s going to put his hands on me and be able to do anything. He doesn’t look big enough.

“He’s probably going to be pretty fast cause he’s lighter. His technique isn’t bad at all, but you’ve still got to have some kind of power, especially in grappling, and I’m a pretty strong grappler myself. I don’t think this is the weight class for him.”

Chimaev obviously disagrees after he debuted in the UFC as a middleweight before dropping down to welterweight for his second fight 10 days later.

Both of those fights ended in dominant finishes for Chimaev and he expects to dispatch Meerschaert in similar fashion.