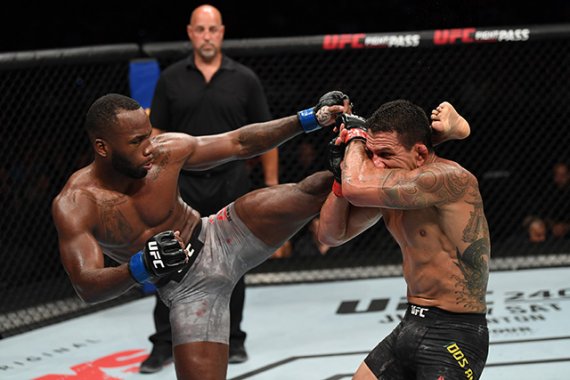 The Ultimate Fighting Championship’s March 13 event looks like it
will have some pivotal bouts at the top of the card.

The highly-anticipated welterweight clash between Leon
Edwards and Khamzat
Chimaev has been rescheduled for that date after twice falling
through due to positive COVID-19 tests.
MMAjunkie.com was first to report the booking. Edwards and
Chimaev were initially supposed to square off at UFC Fight Night
183 on Dec. 19 before the Englishman tested positive for COVID-19,
and they were rebooked for UFC on ESPN 20 on Jan. 20, but on that
occasion Chimaev fell victim to coronavirus. Edwards vs. Chimaev
will serve as the headliner for the event.

Meanwhile, a heavyweight showdown between Jairzinho
Rozenstruik and Ciryl Gane
is also in the works for March 13. La
Sueur was first to report that verbal agreements were in place
for the matchup. The UFC card does not yet have an official venue
or location.

Edwards did not compete at all in 2020 due to having proposed bouts
against Tyron
Woodley in March and vs. Chimaev in December fall through as a
result of the ongoing pandemic. The 29-year-old Team Renegade
product is currently on an eight-bout winning streak in the Las
Vegas-based promotion that includes a five-round verdict over
Rafael dos
Anjos in his most recent outing at UFC on ESPN 4 in July
2019.

Chimaev emerged as a breakout star last year following dominant
victories over John
Phillips, Rhys McKee
and Gerald
Meerschaert in his first three UFC appearances. The 26-year-old
Allstars Training Center representative is 9-0 as a professional,
with all of his victories coming inside the distance.

After suffering his first career defeat at the hands of Francis
Ngannou at UFC 249, Rozenstruik rebounded to score a
second-round TKO win against Junior dos
Santos in his last appearance at UFC 252. “Bigi Boy” has won
five of six UFC bouts — including other notable KO wins vs.
Alistair
Overeem and Andrei
Arlovski.

Gane earned a signature win at the expense of dos Santos at UFC
256, winning via second-round TKO on December 12 to improve to 7-0
in his young professional tenure. The Frenchman has also bested
Raphael
Pessoa, Don’Tale
Mayes and Tanner
Boser in the Octagon.