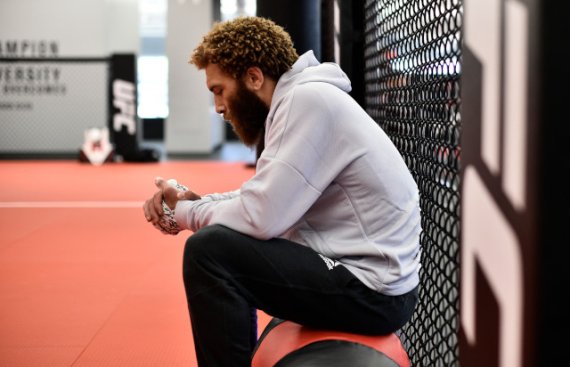 Hours before TMZ first broke the news that Pena had been
let go from the UFC following his second arrest for domestic
violence, TMZ also
put out audio of the 911 call by Pena’s girlfriend.

Per the
most recent reports along with the arrest records and
appropriate affidavits, Pena was witnessed having struck his
girlfriend with a closed fist more than once, and continued when
she fell to the ground. She also injured her wrist and suffered a
bite mark by her knee, according to the affidavit. When another
woman attempted to intervene, Pena allegedly struck her as well.
Both women provided sworn statements following the incident.

In the 911 call, Pena’s girlfriend identified Pena as a UFC
fighter, and claimed that he was under the influence of drugs or
alcohol. She went on to state that she was choked by the fighter
the night before, and detailed the events of that night.

“Well, I wasn’t trying to snitch, but my since my boyfriend wants
to be an a–hole, he put his hands on me, and he’s got to go,”
Pena’s girlfriend told the dispatch officer.

She continued, “Well, he punched me in the face, but he did this
also two days ago, I have the mark, I have a band-aid on my back, I
have everything to prove it. So, I would like the police to come,
and I want them to remove him. So, I can get my things and go the
f— home.”

Police were called and arrived on the scene that previous night,
but they did not make any arrests.

“They were mad because I wouldn’t cooperate, because I didn’t want
to snitch on him, but unfortunately, I have to now. So…I would like
them to come back.”

When asked when the most recent incident occurred, she told the
officer that it was very recent, and that she wanted Pena to be
taken away.

“Probably an hour ago,” she said when questioned about the recency
of an altercation. “We have a no-contact order so technically we
shouldn’t even be living together. I really need a cop to come here
and get him out now, because I have scratches and bruises all over
me now from him. I need him gone. I’m done, and I need help.
Please.”