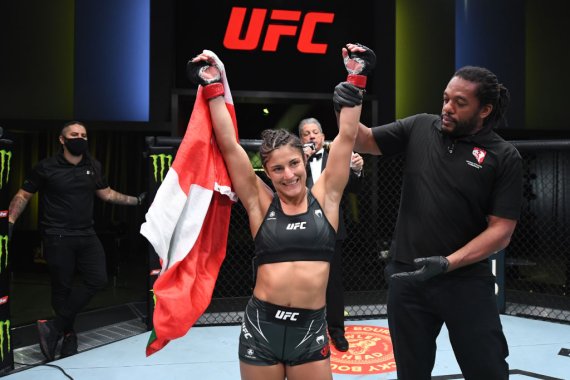 BREAKING: Sijara Eubanks OUT (Covid
Protocol) Lupita Godínez @Loopygodinez
IN vs. Luana Carolina. Godínez is moving up to 125 to fight just
one week after her first victory in the octagon vs. Silvana Gómez
Juárez.

The 28-year-old Mexican steps up to face Luana
Carolina in a flyweight affair at UFC Fight Night 195 this
Saturday. Sherdog’s own sources confirmed the news after ESPN
Deportes made the initial report Tuesday night. Godinez replaces
Sijara
Eubanks, who pulled out of the fight due to COVID-19 protocols.
The last time a UFC fighter competed twice in such a short span was
last July, when Khamzat
Chimaev clashed with John
Phillips before taking on Rhys McKee
10 days later, setting a record that Godinez is now scheduled to
break.

Former Legacy Fighting Alliance champion Godinez (6-1,
1-1 UFC) is coming off a submission victory over Silvana
Gomez Juarez at UFC Fight Night 194 last Saturday. In addition
to her first UFC victory, the Mexican fighter took home
“Performance of the Night” honors. Prior to that, the Team Titan
MMA representative dropped a narrow split decision to Jessica
Penne in her UFC debut.

Capital Da Luta’s Carolina (7-2, 2-1 UFC) has lost only once in her
last eight cage appearances. “Dread” tapped to a kneebar by
Ariane
Lipski at UFC Fight Night 172, but then the Dana White’s Contender Series alum bounced back
on track by edging Poliana
Botelho at UFC on ESPN 23.

UFC Fight Night 195 will go down on Oct. 16 at the UFC Apex in Las
Vegas, Nevada. In the featherweight main event, Aspen Ladd
will take on Norma
Dumont. In the co-headliner, former UFC heavyweight kingpin
Andrei
Arlovski locks horns with Carlos
Felipe.