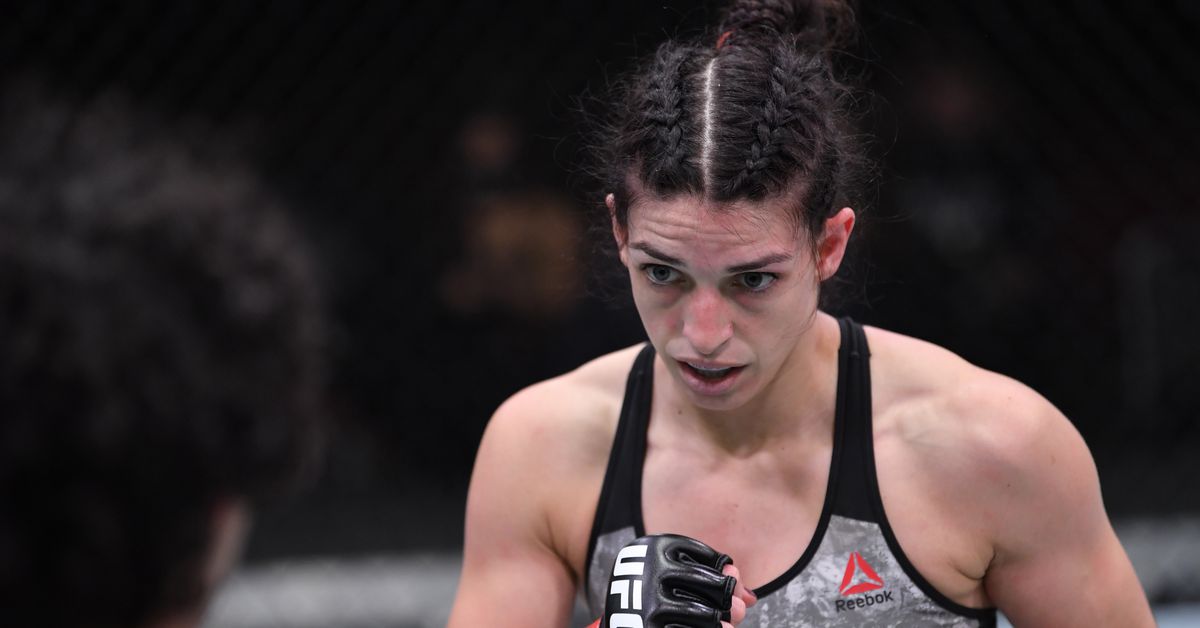 Mackenzie Dern doesn’t believe a title shot in 2021 is out of the realm of possibility.

Dern has the opportunity to make a big leap up the rankings of the always exciting strawweight division when she takes on fifth-ranked Nina Ansaroff this Saturday on the main card of UFC Vegas 23. The event takes place at the APEX and will air on ABC.

Heading into the first women’s UFC fight to ever air on ABC, Dern is coming off of a hard fought unanimous decision win over Virna Jandiroba at UFC 256 to cap off 2020 with a perfect 3-0 record.

The fight was even after two rounds with the final five minutes set to decide it all. Dern showing her ever-improving striking game was able to push through and earn the victory, as well as her first ever broken nose. Not only was the 28-year-old able to pick up the biggest win of her career to date, she also got to prove some of her critics wrong.

“People either grow, or don’t show up for the third round so I think it’s definitely more dangerous to fight someone that grows in the third round,” Dern told MMA Fighting while appearing on What the Heck. “I think I was able to show that I can be someone that gets better and better, when before people used to say, ‘Oh, just take Mackenzie out of the first round, pull her into deep waters and you’ll do good.’ I think that’s the strategy people use to fight me—win on points, go to the judges, go the three rounds.

“[People say] I’m always aggressive, pushing forward, which makes me tired, I’ll make mistakes. So that third round it was who wants it more, and if they want it more they have to get close or exchange with me. So I think it was good to show the different levels I’m gaining, and Parillo boxing, and I feel like I’m just starting to turn the corner.

“I’m excited to show what I’m working on… maybe I won’t because it could be really fast. But I’ve been working hard every day in the gym and I think we’re gonna show a lot of good stuff [on Saturday].”

Ansaroff returns to action for the first time since she—along with wife Amanda Nunes—welcomed her first child Raegan Ann in September. “The Strina” last competed at UFC 238 in June 2019 and was on the wrong end of a unanimous decision against the undefeated Tatiana Suarez.

Prior to the fight in Chicago that many believed was a title eliminator at 115 pounds, Ansaroff had won her previous four fights, which included victories over Claudia Gadelha, Angela Hill and Randa Markos. So when Dern saw Ansaroff’s name on the other side of the contract, she was admittedly fired up to compete against another hard working and strong mom.

“I was so happy,” Dern said of the booking with Ansaroff. “I was really excited because after I beat Virna, I didn’t move at all. She was my first ranked fighter—even though she was two spots behind me—and I saw people moving and I didn’t move at all. I thought maybe I’d move to No. 10, that top-10 is so close, yet so far being No. 11. I kept talking to Mick [Maynard] and I told him give me anyone inside the top-10. I want to move up, I want someone who is really going to push me.

“I don’t want to get to the belt fighting people who aren’t ranked. I want to prove myself and the best way is to show that I’m ready. When they said Nina, I know Nina’s gonna fight. I thought it was cool and I know what it’s like [to be in her shoes]. My daughter is going to be two in June and I went through the whole process she’s going through.

“When I saw she was No. 5, I’m just so happy for this opportunity. I’m hoping it will push me far up in the rankings.”

Dern began 2020 with a pair of submission wins, including the first ever leg lock stoppage in women’s UFC history against Hannah Cifers in May. She went on to tap Markos in the first round at UFC Vegas 11 four months later.

While she has vastly improved in the standup, Dern is planning on using her bread and butter to put on a stamp on a, hopefully, short night at the office.

“I mean, it’s jiu-jitsu. I think the submission will come in this fight,” Dern stated. “I know she has great takedown defense. She’s a striker and my last fight went all three rounds striking. I think I proved a lot in that fight, but the way to get through this one, cleanly with no broken nose, is to get it to the ground and submit her as fast as possible.”

With family and fighting at the forefront of her mind, Dern is ready to have the biggest year of her UFC career in 2021. Should Saturday night’s bout go as planned, Dern could very well find herself in the top-five of the strawweight division.

Should that happen, Dern is ready for everything that comes with that low number next to her name. In fact, she will embrace that role in hopes to getting a crack at UFC gold sooner rather than later.

“I feel like I’m ready for the champion, and for the belt right now because that’s just how focused I am,” Dern explained. “Of course, getting a couple more fights is always good to get better, but focus wise, I could be there now. All I do [with my life] right now is my kid, my baby, my husband, our life at home, and the gym. I’m just watching the fights all the time and I can’t even see myself in a different way. I’m just really, really focused and that’s not gonna change. I think people are gonna see how ready I am.

“The way I’m approaching things, adding strength training, if we need to take a fight last minute we’ll be able to do that. I definitely want to fight as many times as possible this year against [opponents] that will get me closer to the belt. The champ is fighting Rose [at UFC 261], Yan (Xiaonan) is fighting Carla Esparza, so there’s a lot of things that are gonna be moving around in the top-four, top-five in the next few weeks.

“I don’t know about Joanna (Jedrzejczyk), if she has a fight but we’ll see what happens. I think if I can get this win, jump into the top-six, then I should get [another] top-five opponent next.”