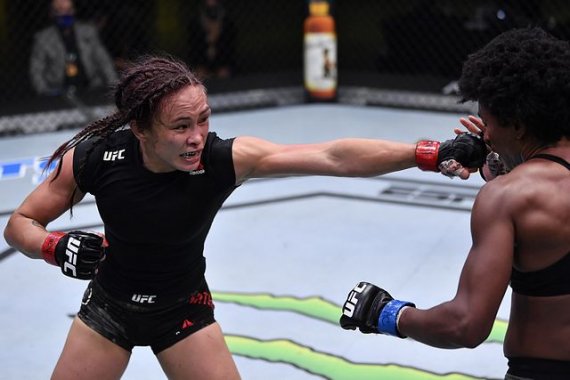 A previously rumored flyweight clash between Michelle
Waterson and Marina
Rodriguez is now official as the main event for
UFC on ESPN 24.

The Las Vegas-based promotion formally announced the bout on
Tuesday. The fight will be five rounds like a normal UFC main
event, but both Waterson and Rodriguez will be competing a division
above their normal weight class. The card lost its originally
scheduled headliner between T.J.
Dillashaw and Cory
Sandhagen when Dillashaw was forced to pull out of the contest
after suffering a cut in training.

UFC on ESPN 24 takes place on Saturday at the UFC Apex in Las Vegas
and will see Donald
Cerrone square off against Alex Morono
in the evening’s co-headliner. The main card airs on ESPN and ESPN+
at 8 p.m. ET/5 p.m. PT following prelims on ESPN+ at 5 p.m. ET/2
p.m. PT.

Waterson is coming off a previous appearance in which her fight was
elevated to main-event status on short notice. In that bout, “The
Karate Hottie” halted a two-bout skid with a five-round verdict
over Angela Hill
at UFC Fight Night 177 this past September.

Rodriguez earned a significant triumph at UFC 257, where she
stopped highly-touted prospect Amanda
Ribas via TKO 54 seconds into Round 2 of their Jan. 23 matchup.
The Brazilian striker also owns notable wins over Tecia
Torres and former World Series of Fighting champ Jessica
Aguilar during her Octagon tenure.