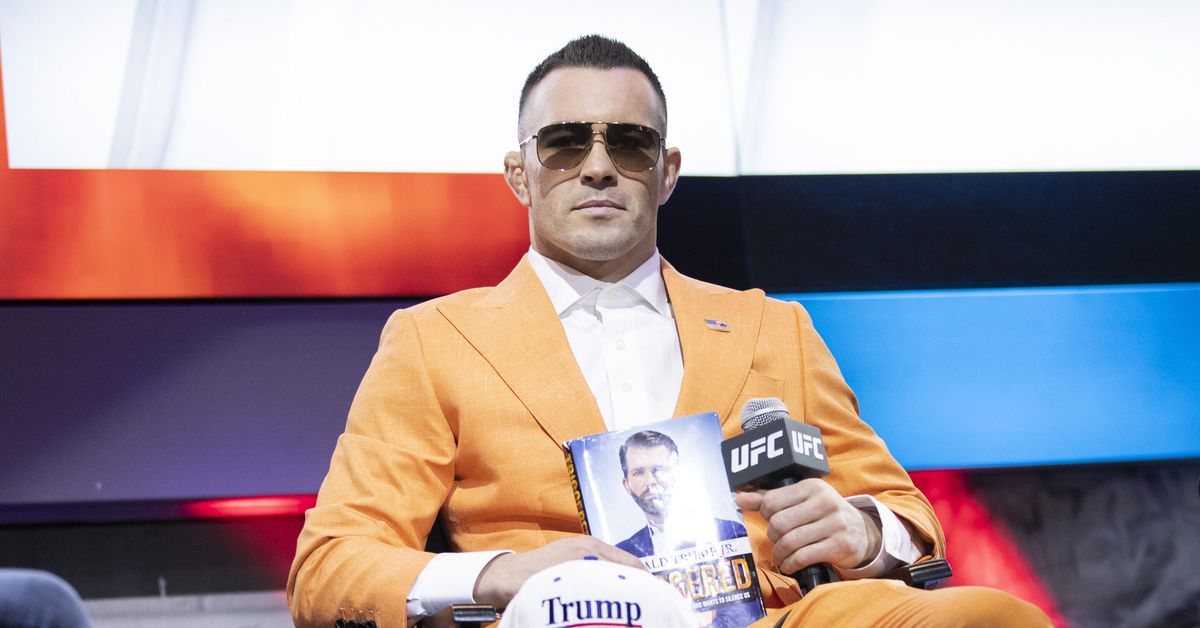 Earlier this week it was announced that the UFC is targeting a welterweight title between current champion Kamaru Usman and No. 1 contender Colby Covington for for Nov. 6 at UFC 268. And with just a little over three months before the fight, Covington is already ramping up every ounce of promotion he can muster.

Speaking with Submission Radio this week, Covington talked about his upcoming rematch with Usman and came out of the gate swinging, accusing the welterweight champion of taking performance-enhancing drugs for his entire career.

“He’s been doing EPO his whole career,” Covington said. “It’s so obvious. His chemical imbalance, his body. He’s got the pimples all over his back, all over his face. You’re a 35-year old man, you’re not going through puberty like you’re in your teens anymore. You should not be having that chemical imbalance and that breakout. That’s from his testosterone being out of whack, and his estrogen and his testosterone levels being out of whack. So, he is the CEO of EPO. I’ve heard firsthand from some people that he trained with, some people that I might’ve went to wrestle in college with that said the same thing. They could verify that he has done EPO and he’s injected in his ass. So, he’s the CEO of EPO, he’s ‘Marty Juiceman.’”

Erythropoietin (EPO) has been in the headlines recently as former bantamweight champion T.J. Dillashaw—who was suspended for the substance back in 2019—made his return to the cage this past weekend. Usman though, has never been seriously accused of cheating and, in fact, has passed 51 USADA tests, dating back to 2015, all without issue. Covington, though, puts no stock in that.

“There’s ways to get around the tests,” Covington said. “They’re not blood testing, they’re doing a piss test here and there. They’re not gonna blood test him, they’re gonna let him get away with it. But you’ve gotta live with that the rest of your life. You gotta live with that on your conscience, that you had to cheat your whole way through your career. I know I’m all-natural American. I work the hard way. You know, blue collar. Earned it. Blood sweat and tears. This is earned to the very core, to the very root naturally. I didn’t cheat, I didn’t cut corners. I took the long way to get here.

“So, he has to live with that. He’s gonna have problems later in life. His organs, all that stuff’s gonna shut down. He’s taking years off his life. But that’s the choice that he has to live with. And if that’s what he wants to do, that’s what he’s gonna do. But you cannot stop destiny. And this is destiny. Nov. 6 is destiny. Colby ‘Chaos’ Covington will be the UFC welterweight champion of the world, and there’s not a steroid in the world that can stop it.”

Covington and Usman first fought at UFC 245 in 2019 with Usman securing a fifth-round TKO stoppage after breaking Covington’s jaw. Since then, Usman has added three more title defenses to his resume and is starting to make a run at Georges St-Pierre’s title of Greatest Welterweight of All Time. Covington, meanwhile, has only fought once since then, a fifth-round TKO of former champion Tyron Woodley. That difference in activity would have many believing that Covington could be in for a long night, given how the first bout went, but Covington says that everyone is buying into the hype. Hype that he is about to derail.

“It’s the same Usman, the same Marty Juiceman from 2019. It’s a different Colby Chaos Covington in 2021. Yeah, he’s beating a guy he’s beaten up for his whole career at his gym (Gilbert Burns)…. And then you beat up journeyman the fragile guy ‘Street Judas Masvidal?’ You think there’s pride and honor in that? Beating that guy twice? You think you’re a big deal, this pound-for-pound god, the greatest of all time beating a guy who has almost 20 losses on his record? The guy’s a complete scrub…. And if you call yourself a GOAT for fighting that guy, oh I love it. Keep buying into that, keep feeding into that ego. And the media’s gonna keep stroking his ego, like he’s this god and this pound-for-pound number one. So, it’s gonna be great. It’s the same guy that I’ve fought before, and I see all the holes and weaknesses in his game, and I’m gonna exploit them.”

Covington will get his chance to prove the doubters wrong on Nov. 6 at Madison Square Garden in New York City.

PEDs. Aljamain Sterling to T.J. Dillashaw: ‘You didn’t come clean, you idiot! You got caught!’

Crossover. A.J. McKee welcomes future fights against UFC champions but ‘if the check’s not right, don’t even talk to me’.

Be like Deron, not the number of other fighters who are getting real stupid about this.

Do I agree w Simone?
Not entirely.
Do I understand?
Entirely.
Will I care about in a week?
Prolly not.
Should you?
Prolly not.
Will it still be affecting her? 100 percent.

If its still affecting u I’d suggest trying to emotionally invest into things u have control over.

The sipping tea was a nice touch.

Just got my eye on a new car, you all good mate?

What’s great about USADA is that none of the fighters actually believe it works given the amount of PED accusations that fly and it also costs an enormous amount and is highly invasive to everyone’s personal lives. What a program.