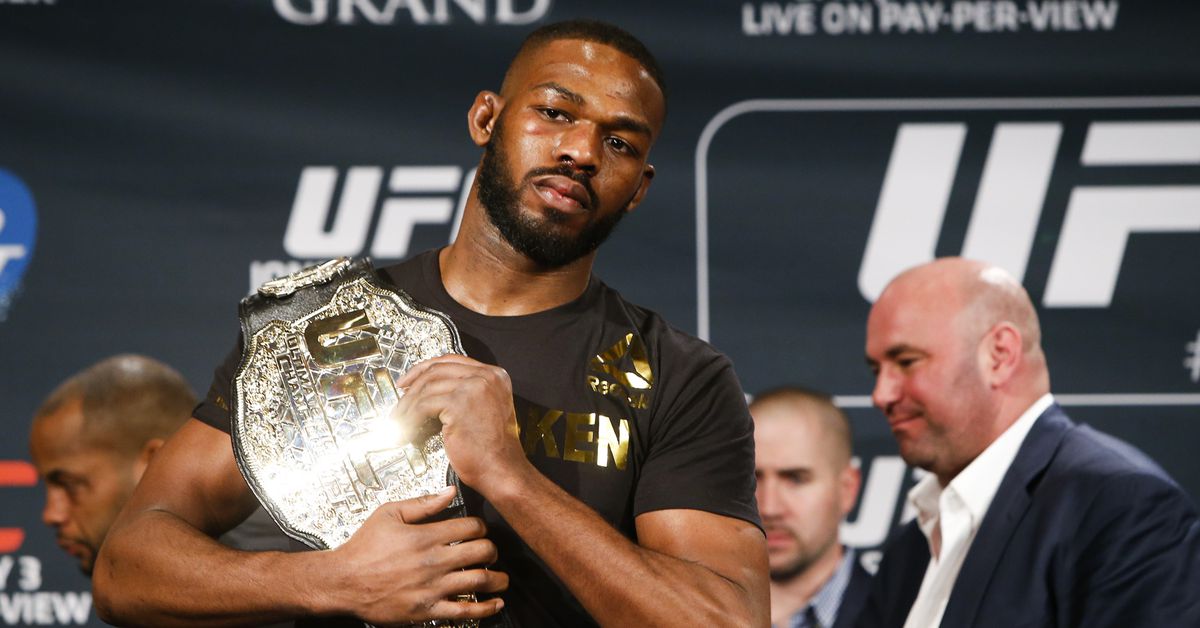 This week, UFC President Dana White revealed that the UFC was moving on from the proposed Francis Ngannou vs. Jon Jones superfight, at least for now, and apparently that’s quite alright with Jon Jones.

On Monday, White told TSN that with negotiations at a standstill with Jones, heavyweight champion Francis Ngannou would make his first title defense against former for Derrick Lewis this summer, but that there were still “some big fights that can be made” with Jones and that the UFC was interested in doing so. That, of course, led to speculation that perhaps Jones would make his heavyweight debut against former champion and current UFC heavyweight GOAT Stipe Miocic. However, in a series of since-deleted Tweets, Jones shot down that notion and made it clear his sights are set on Ngannou and he’s content to wait the UFC out.

“I’m not here to fight Stipe but I will defend my belt against him no problem. I’m looking for the biggest draw and I’m willing to wait. 33 years old in (sic) a better athlete right now than I’ve ever been before. I’m just going to keep training my ass off.

“I’m sick of hearing the same s***, you’re not a big enough star, you don’t bring in enough paper view (sic). I’m ready to fight fights that will bring in pay-per-view. The world wants to see some black on black crime right now and I’m ready to give it to them lol.”

Jones has had a contentious relationship with the UFC for some time now. Last year, Jones butted heads with the UFC over his planned next light heavyweight title defense, with White pushing for a rematch with Dominick Reyes and Jones not interested. Instead, Jones ultimately decided to vacate his title with the intent of moving to heavyweight, where a superfight with Ngannou was bandied about. This was before Ngannou won the heavyweight title and still the UFC and Jones could not come to terms over compensation.

But this time fans had hopes that things would be better as in the lead up to UFC 260, White repeatedly said that Jones would face the winner of the Miocic-Ngannou title fight. That changed almost immediately after Ngannou won though when Jones Tweeted out “Show me the money” and White questioned whether Jones actually wanted the fight. Since then, Jones and White have been squabbling in the media with seemingly little headway being made in the actual negotiation process. But though things seem to be going poorly in that regard, Jones did follow-up on his deleted Tweets by revealing he is set to meet with some sports agents next week.

The good news is I have two really big meetings with some awesome attorneys and sports agents next week. Feel like my professionalism is about to go up a notch https://t.co/nWOFSQ9zvG

Jones has reportedly handled most of his fight negotiations in recent years, but with Jones and the UFC seemingly at an impasse, perhaps the inclusion of specialists can finally get both parties to come to agreeable terms.

Broken. Dana White on Kayla Harrison: ‘I don’t know if she’s ready’ for the UFC.

Perseverance. How Charles Oliveira beat the odds to fight for UFC title: ‘He may never walk again’.

The Man and the MITH. Breaking down the events of UFC Vegas 26 and Bellator 258.

Clearing the air on why myself and @yanezmma are not fighting this weekend at #UFC262….
NOT Adrian’s fault at all whatsoever.

We’re still set to fight July 24th… and I’m still 1000000% down to fight sooner if the opportunity presents itself… in a state other than Texas pic.twitter.com/ojvkYO4mim

To clarify: we were never set or signed to fight May 15th. We are set and signed to fight July 24th.
I’m addressing this because we’ve been campaigning to get moved.
Nobody pulled out of anything.
The hypothetical move to May 15th just never happened and can’t happen.

Some large claims being made here.