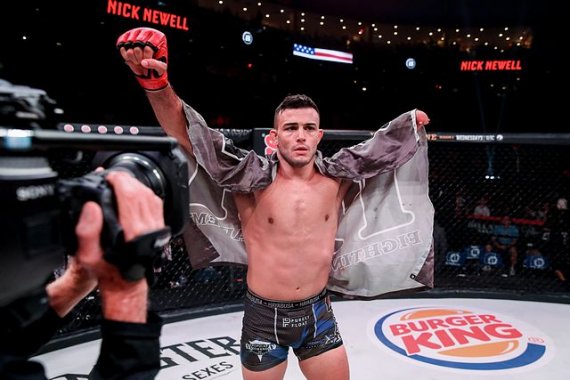 Bellator MMA is continuing to build on its return trip to San Jose, California, in May.
According to the promotion on Thursday, Nick Newell (16-3) will be meeting Zach Zane at lightweight at Bellator 243 on May 9.

Newell dropped his most recent bout against Luis Muro in October, suffering a narrow split decision defeat at Bellator 232. Prior to the loss, Newell made his successful promotional debut by tapping Corey Browning with a first-round arm-triangle choke at Bellator 225 in August 2019. The former Dana White’s Contender Series fighter and World Series of Fighting title challenger posts an impressive 81 percent finish rate throughout his career. In each of his last three victories, Newell has tapped his opponent in the first round.

Zane, a fellow Contender Series competitor, made his first fight with the California-based promotion count when he beat the undefeated Nainoa Dung by decision in December. That win on the scorecards marked the first time “God’s Warrior” had ever won a fight that went the distance. Prior to that performance, all 13 of the Hawaiian’s previous victories came by way of stoppage, including 10 in the opening frame.

Bellator 243 will go down on May 9 at the SAP Center in San Jose, California. The event will be headlined by a pair of title fights, as Ryan Bader defends his light heavyweight strap against Vadim Nemkov. Douglas Lima will attempt to become one of a small number of two-division Bellator champs as he goes up to middleweight to face Gegard Mousasi for the vacant 185-pound belt.