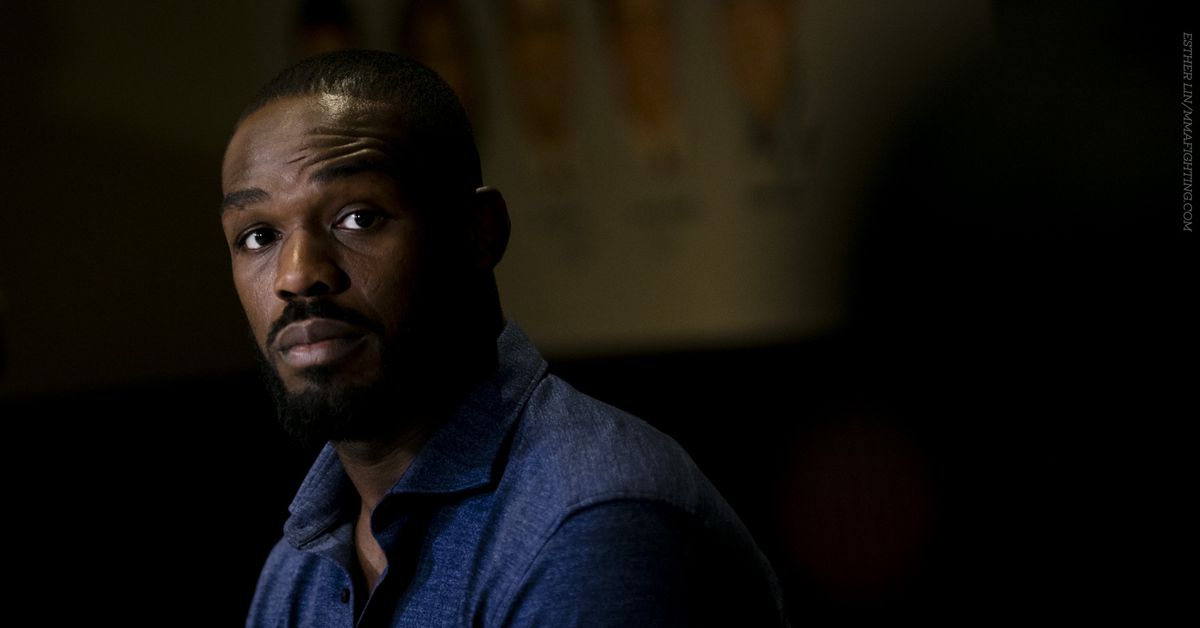 The UFC light heavyweight champion was picked up just after 1 a.m. local time by the Albuquerque Police on multiple charges: aggravated DWI, negligent use of a firearm, possession of an open container and driving with no proof of insurance.

Officer Jason Brown and officer Brian Johnson were two of the officers who responded to the scene after hearing a single gun shot, according to arrest records obtained by MMA Fighting.

Brown approached the vehicle and upon asking for the driver’s side window to be rolled down, he spotted a bottle of Recuerdo tequila and a “green, leafy substance on his shirt and pants, consistent with marijuana.”

After identifying Jones, Officer Brown requested his registration and proof of insurance — which, according to the police report, Jones “fumbled with his documents” and was unable to locate his insurance information. In addition, Brown observed that Jones “had an odor of alcohol coming from his facial area.”

The assistance of DWI officer Johnson was requested on the scene and placed the UFC champion under arrest for DWI after he alleged failed multiple field sobriety tests.

Once Brown ordered for Jones’ vehicle to be towed, he located a loaded hand gun under the driver’s seat, as well as “a spent round just outside the driver’s door.”

You can read Officer Brown’s full report below:

On 3-26-20 at about (12:58 a.m.), I was at 3rd and Central in the parking lot. I heard a single gun shot to the west on Central. I drove west on Central and observed a black jeep on the south side of the street parked in front of 312 Central. I observed a male in the driver’s seat and a subject on the sidewalk by the passenger side door. I observed no other subjects in the area. I pulled up behind the vehicle and turned on my overhead lights. The vehicle was running. I contacted the driver and asked him the roll down the vehicle windows. I observed an open bottle of alcohol on the floor behind the passenger seat. It was a 1⁄4 full bottle of Recuerdo, 40-percent alcohol. I asked the driver to hand me the bottle. I also observed he had green, leafy substance on his shirt and pants, consistent with marijuana. I identified the driver as Jonathan Jones. I asked Jones about the gun shot and he stated he did not know. I asked him why he was out and he stated he wanted to go for a drive. I asked him for his vehicle registration and proof of insurance. Jones fumbled with his documents and was not able to locate proof of current insurance. I also observed that Jones had an odor of alcohol coming from his facial area. I requested the assistance of a DWI officer. Officer B Johnson was working a DWI saturation patrol and responded to my request. After Officer Johnson completed his investigation, he placed Jones under arrest for DWI. I had the vehicle towed from the scene. During an inventory of the vehicle subject to arrest and tow, I located a loaded handgun under the driver’s seat. I also located a spent round outside the driver’s side door. The spent round was the same caliber as the firearm that was located. A video of my investigation will be uploaded to APD evidence. The handgun was tagged into ABD evidence.

Officer Johnson’s statement of the events:

On 3-26-20 at (1:01 a.m.), Officer Brown and Officer Heshley heard a gun shot in the 3rd St. NW/Central Ave. NW area. Officers arrived on the scene approximately 10-15 seconds later. Officer Brown noticed a black 2019 Jeep vehicle parked facing eastbound in front of 312 Central Ave. SW. Officers noticed a black 2019 Jeep vehicle and two unknown homeless suspects. The vehicle engine was on and the vehicle was in park. Officer Brown engaged his emergency equipment and conducted a traffic stop. He made contact with the black 2019 Jeep vehicle driver Jonathan Jones. Officer Brown asked him about the gun shot and Jonathan said he didn’t know anything. Officer Brown observed signs of intoxication and asked for a DWI saturation unit. I was working DWI saturation and was dispatched to the traffic stop. I made contact with Jonathan Jones. I observed he had bloodshot, watery eyes and a strong odor of alcohol coming from his facial region. He admitted to driving earlier and had the intention to drive now. I asked him to exit the vehicle. Jonathan did field sobriety tests and performed poorly on all three of the,/ He also performed poorly on two out of three alternative tests. He was searched and arrested. He was transported to the PTC where he was read the N.M. implied consent advisory and given the Intoxilyzer 8000 breath test. He was given a deprivation period from (1:02 a.m.) until (1:48 a.m.). Prior to administration of the aforementioned breath test, his mouth was checked at (1:02 a.m.) and found to be clear of any foreign objects. Test results were at or above twice the legal limit. He was checked through MVP and found to have one prior DWI arrest. During the tow inventory of the vehicle, a black handgun was found underneath the driver seat. A 1⁄2 empty bottle of Recuerdo 750ml was found behind the passenger side of the vehicle. The handgun was tagged into evidence. Jonathan was unable to provide the vehicle’s valid insurance paperwork. He was booked on the listed charges. His vehicle was towed. A copy of the lapel camera was tagged into evidence.

Since returning to the Octagon following a 15-month layoff in December 2018, Jones recaptured the light heavyweight title with a third-round TKO win Alexander Gustafsson, along with three successful title defenses. In his most recent appearance, “Bones” picked up a unanimous decision win over Dominick Reyes in the main event of February’s UFC 248 event in Houston.

Jones is scheduled to be back in court April 8 for a bond arraignment hearing.