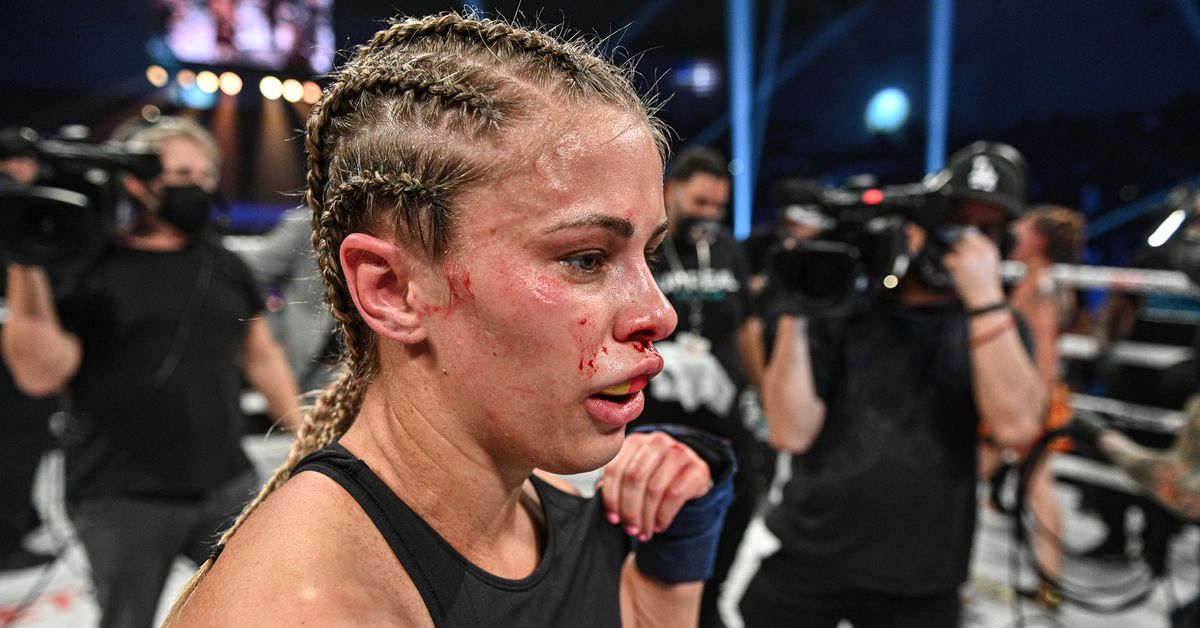 The former UFC star engaged in a five-round battle with opponent Britain Hart last Friday, but ultimately lost a unanimous decision on the scorecards. For the majority of the fight, VanZant was playing defense more than offense as she looked to avoid Hart’s pressure and rapid-fire combinations.

The fifth and final round was definitely the best for VanZant as she finally came alive, dishing out punishment of her own and closing the fight better than she started it.

Now just days after a loss in her BKFC debut, VanZant admits there was a sizable learning curve to endure for her first fight, especially considering it’s essentially impossible to truly prepare for a bare-knuckle fight until you’re throwing and getting hit with bare knuckles.

“For me, honestly, there’s a few things I’m going to take away from it and go back to my gym and adjust and learn,” VanZant said on her Sirius XM show Knuckle Up Radio. “It was a really big learning process throughout the fight. As the rounds went, I feel I was kind of finding my rhythm and finding my groove and kind of understanding what was working, what wasn’t. Stepping into an entirely different sport really and not being able to fully train this sport unless you fight. You can’t really box bare-knuckle in the gym. It was an adjustment period.

“It sucks. It’s unfortunate. I’m not happy that I lost ever, it’s the biggest letdown in the world but I know it’s not going to shake me. It’s not going to define me. I know with my performance what I did wrong and I can go back and learn and get better and what an inspiration I hope to other people who are questioning if they belong in something or trying something new and have that question like ‘what if I fail?’ Yeah, what if you fail? It’s fine. It’s not a big deal. Failure happens everyday. It happens to some athletes on the biggest stages with the biggest audience and guess what? You go home to your family and you start over.”

Earlier in the fight, VanZant was cognizant that she was getting caught with punches that were potentially causing cuts on her face, which may have served as a distraction. By the time she got to the final two-minute round, VanZant decided to just let her hands go and that’s when she finally started to perform up to her abilities.

“Definitely going into round five, I’ve definitely seen all the comments like ‘that was actually Paige fighting.’ That’s how I normally fight, especially when I was fighting for the UFC,” VanZant said. “It was a learning process. Every punch, it does feel different to get hit with a bare-knuckle versus a glove. It definitely didn’t hurt worse because I’ve been kicked and kneed in the face so it was more like worrisome, especially since there was no big screen I could look up at. Some of the punches I was like ‘crap, that cut me open.’ You can see me cuss like ‘F word’ because I thought one of the punches cut me open and I was so hesitant in the moment that I was getting cut open with these shots.

“Then of course going into the fifth round, it didn’t matter if I was cut open or not. I was going to go for broke and try to win and finish the fight. It was a big learning process.”

As soon as the decision was read and Hart declared the winner, VanZant immediately left the ring and darted to the backstage area before she could be interviewed.

According to VanZant, that was just the emotion of the moment getting the better of her because she was disappointed with her performance and the outcome.

‘’Obviously, I was a little upset,” VanZant said. “I walked out of the squared circle without doing the little [post-fight] interview. I’m still a fighter and crying in front of the public is not my thing. So I knew tears were coming and I was like I need to get out of here as soon as possible.”

In the aftermath of the fight, Hart has complimented VanZant while adding that she’s never been hit harder in her entire life. In return, VanZant paid homage to Hart’s toughness, durability and the composure she showed during the fight while hoping that they will eventually meet again one day.

“She’s got a dog in her and it took me until the fifth round to find mine,” VanZant said about Hart. “I do think we’ll cross paths again. I don’t think I deserve to fight her right now, not an immediate rematch. Yes, we had a close fight but I don’t see it as close as a lot of the world sees it. I know I won the fifth round but I’d have to go back and watch but I wasn’t happy with my performance in rounds one through four. It took that fifth round for me to get that win.

“I think me and her will cross paths again and I want that to be hopefully for a title. I think that fight should happen later in my career. I need to go get a few more wins and earn my shot against her again.”

Prior to the event, VanZant heard from all the naysayers who criticized her decision to fight in bare-knuckle rather than stick to her previous career in mixed martial arts. Of course, VanZant was adamant that joining BKFC was solely her decision and despite a loss in her debut, it’s only fueling her to come back that much better the next time.

“I’m excited that I was able to get through it,” VanZant said. “Everyone questioned ‘what would happen to my face’ and all that silly stuff. The fight was not that long ago and I’m totally fine and I’m ready to get back to training.

“I actually told my manager and told [BKFC President] Dave Feldman that I want to fight in April. I don’t think it’s going to take me long. I want to ride the momentum. I know the adjustments that I need to make are very small and now my mindset knows what to expect. I want to continue on like that round five. I want one more round. I want that one more round to happen as soon as possible.”

For all the emotions she felt on the night and the immediate desire to just walk away from the sport, VanZant only needed a few minutes to gather herself so she could begin plotting her comeback and hopefully serving as an examples to anybody else who is thinking of giving up.

“Losing sucks and it’s embarrassing and defeating but it’s a part of the process,” VanZant said. “If I quit right now, that would make me a loser but if I press on and keep training and pick myself up, that’s my inspiration story.”