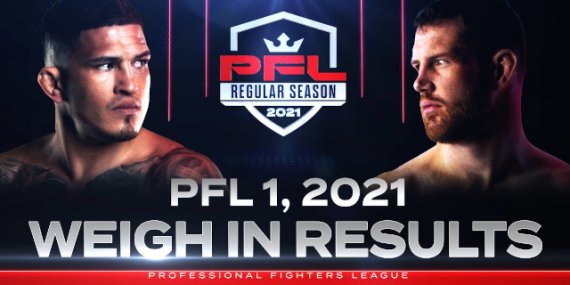 Even the threat of fine and a newly established penalty for playoff
points did not inspire every fighter to make weight.

The
Professional Fighters League makes its return this Friday after
taking all of 2020 off.
PFL 1: 2021 Regular Season features the start of the season for
both the featherweight and lightweight divisions. Headlining the
card is a lightweight bout between former
Ultimate Fighting Championship champion Anthony
Pettis against Clay
Collard, with the latter returning to mixed martial arts after
a memorable foray into boxing. One fighter did miss weight:
Mikhail
Odintsov, who is now unable to earn playoff points if he wins
on Saturday.

This is the first fight for Pettis (24-10) outside of the UFC. He
exits the organization on a two-fight win streak, having picked up
decision wins over Alex Morono
and Donald
Cerrone. “Showtime” will look to add another highlight to his
already impressive resume, and grow his legacy inside the PFL. The
34-year-old officially stepped on the scales at 156 pounds.

This is the biggest opportunity in the career of Collard (18-8, 1
NC). “Cassius” has won four of his last five mixed martial arts
bouts, with his lone defeat coming to Darrick
Minner in 2018. Collard stayed active in boxing in 2020 as he
went on a five-fight win streak that saw him defeat two undefeated
prospects. However, his boxing stint ended with a pair of decision
losses. Collard weighed 154.6 pounds for the biggest bout of his
career.

* Odintsov missed weight by .4 pounds, he has been fined 20
percent of his purse, he is ineligible to win playoff points and he
has been penalized one point in the standings.