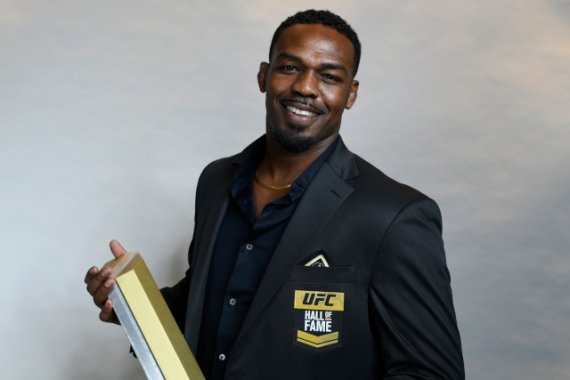 On Friday, audio of the call to the police from Caesar’s Palace in
Las Vegas has been released regarding Jon Jones. The
call was obtained by
MMA Fighting, and it chronicles the communication from Caesar’s
Palace security to the authorities about Jones’ alleged domestic
violence offense on fiancée Jessie Moses. Jones was
arrested last Friday for battery domestic violence, a
misdemeanor, and tampering or damaging a vehicle to cause damage in
excess of $5,000, a felony.

Since then,
details have emerged that in addition to an alleged unseen
altercation between Jones and Moses in their hotel room, Jones was
picked up for headbutting a police car. Regarding the incident with
Moses, the security officer, Eduardo, told the 911 dispatch officer
that a bloodied Moses came down to the main floor seeking help.

Eduardo continued, “She’s down with us while the male’s up at the
room, and he’s actually a professional MMA fighter, Jonathan Jones.
And she’s refusing to go back to the room, we’re trying to assist
her to have her grab her stuff, and she’s just…”

The dispatcher questioned the security officer about Jones and
Moses, getting their information for recordkeeping purposes and
determining details of the scene at the time. Moses had left the
hotel room with their children, barefoot and looking for
assistance. When she reached the main floor, she declined any
significant medical treatment other than standard first aid to stop
the bleeding.

“It’s a little weird,” the officer explained, “because she’s trying
to get assistance, but she’s refusing to go back up to the room.
She’s on the casino floor, and I believe that her three daughters –
she has three young girls with her…She’s got a grey sweater, grey
sweats, no shoes.”

Jones has since gotten out on bail, which was set at $8,000, and he
has
posted on social media about this ordeal. Jones claimed that he
will “leave alcohol in my past forever,” while also claiming that
he wants to “turn this nightmare into this best thing to ever
happen in my life.”

Since the video has been released, the UFC as well as UFC President
Dana White has not commented. When news of this incident first came
to light, a nonplussed White remarked that “this is what Jon does
when he comes to Vegas.” The organization has not made any
statement about any possible sanctions it would levy on Jones, and
instead approached the situation from a “wait-and-see”
perspective.

“We’ll see how this thing plays out legally and we go from there,”
White stated.