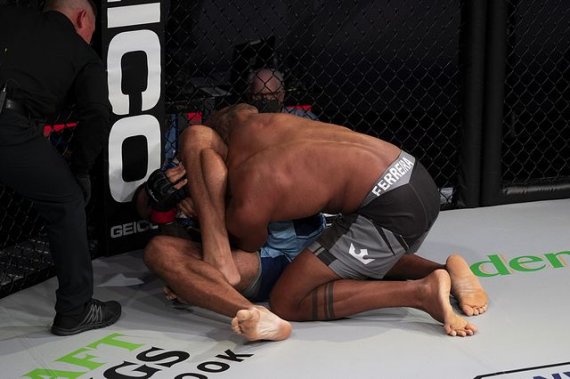 The PFL fight between Fabricio Werdum and
Renan Ferreira from last Thursday night has been overturned to a no
contest by the New Jersey State Athletic Control Board.

The New Jersey State Athletic Control Board has overturned Renan
Ferreira’s first-round knockout victory over Fabricio
Werdum at Professional Fighters League’s third regular season
event of 2021 to a no contest.

ESPN
was first to report the news. After reversing into top position,
Ferreira found himself ensnared in a triangle choke. At one point,
Werdum appeared to elicit a quick tapout from his opponent and then
briefly relaxed the hold. When referee Keith Peterson failed to see
the tap, Ferreira capitalized and unloaded with hammerfists to
force the stoppage 2:32 into Round 1.

OFFICIAL: The New Jersey State Athletic
Control Board has overturned the result of Werdum vs Ferreira to a
No Decision. Per the PFL rules, both fighters receive 1 point in
the heavyweight standings. pic.twitter.com/9kwudsPYmP

PFL confirmed the ruling and announced that both Werdum and
Ferreira will receive one point apiece in the promotion’s regular
season heavyweight standings. Meanwhile, Werdum’s manager, Ali
Abdelaziz, took to social media to
express his satisfaction with the NJSACB’s ruling.

“I want to thank the New Jersey Athletic Commission, Mr. Nick Lembo
who worked all weekend on over turning Fabricio Werdum’s decision
to a no contest from his last week at PFL,” Abdelaziz wrote. I also
want to thank PFL for quickly providing all of the necessary
evidence.”

The promotion has not yet announced the next opponent for either
Ferreira or Werdum.