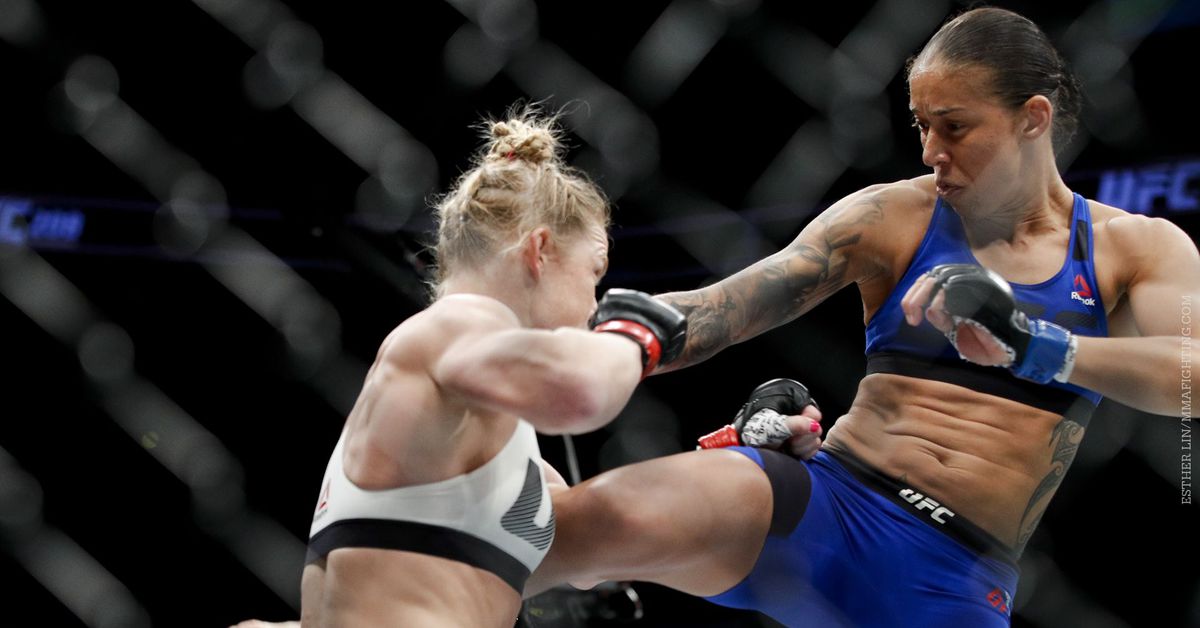 It was just four years ago that the UFC crowned its first ever women’s featherweight champion, an event that felt just a bit off from the get-go.

Firstly, the consensus best 145-pounder in the world, Cris Cyborg, was not part of the equation. The UFC had made an ill-fated attempt to guide her down to bantamweight, booking her in a pair of 140-pound catchweight bouts to begin her UFC career. When it was finally decided to just introduce a women’s featherweight title, Cyborg was unavailable due to a December 2016 USADA violation. By the time she was given a retroactive therapeutic use exemption and saw her suspension lifted, the matchmakers had moved on.

It was decided that a featherweight queen would be crowned at UFC 208 on Feb. 11, 2017, in Brooklyn. The participants were former bantamweight champion Holly Holm and decorated kickboxer Germaine de Randamie. It was a respectable matchup, even if one got the sense that the winner was simply holding the spot for Cyborg.

It didn’t help that the fight itself was a controversial one, as not only was it closely contested but it also featured strikes landed by de Randamie after the bell in rounds two and three. Regardless, de Randamie won a unanimous decision to etch her name in the history books.

Unsurprisingly, Holm wasn’t pleased with the unpunished fouls, calling them “intentional” and “the hardest shots I felt the entire fight.” In a subsequent interview, she questioned whether de Randamie should consider the win to be “a real victory.”

A de Randamie-Holm rematch is not out of the question given that both fighters currently factor into the current bantamweight title picture, but until that sequel is booked, let’s take a closer look at their first meeting with a good, old-fashioned Robbery Review.

As you’d expect in a matchup between two premier strikers, this was a chess match on the feet with some grueling grappling mixed in. It was de Randamie’s muay Thai stance versus the kickboxing/karate hybrid style of Holm, and “The Iron Lady” appeared to get the better of Holm in the opening round. Holm settled on a strategy of scoring from the outside with outside leg kicks and oblique kicks, but couldn’t stay out of the range of de Randamie’s punches. De Randamie’s right hand was a dangerous weapon in this fight.

In round two the action picked up, with Holm letting her hands go and de Randamie finding openings to counter-punch, and it was also in this round where controversy struck. Holm and de Randamie spent much of the frame grappling against the fence, landing a few mostly ineffectual strikes in the clinch outside of some solid knees to the body by de Randamie. They mixed it up in the closing seconds and de Randamie scored with a massive right hand that wobbled Holm… a right hand that was clearly after the buzzer.

With the benefit of replay, it looks like it was part of a combination. Referee Todd Anderson stepped in as soon as he could, so it’s difficult to place blame on him for the confusion. He did go over to speak to de Randamie’s corner between rounds, but commentator Joe Rogan pointed out that whatever he had to say, it probably didn’t do Holm much good.

Holm stuck with the game plan in round three, firing kicks to de Randamie’s lead leg. They can’t have felt good, but de Randamie absorbed them without much trouble and continued to land accurate punches. She also displayed excellent takedown defense throughout the fight. At the end of the third round, Holm landed a hook kick that caught de Randamie’s head and then almost took a stumbling de Randamie out with a follow-up kick. Instead, de Randamie recovered and fired back and we got our second after-the-buzzer blow, this one looking more blatant than before. However, Anderson only issued a stern warning to de Randamie, threatening to take a point if it happened one more time.

Perhaps sensing she was behind, Holm fought with renewed urgency in rounds four and five, closing the distance quicker and stringing together her strikes more effectively. De Randamie still threatened with her power right, but Holm was the busier fighter in the championship rounds. The moments of wall-and-stall seemed to be in Holm’s favor, though they’re difficult to score with so little significant damage being done and no takedowns to be had. It’s unclear if Holm thought she needed a finish or not. Either way, she decided not to go for broke and this one ended up going to the judges.

Lee’s scorecard differed slightly, as he gave rounds one, three, and four to de Randamie, while D’Amato and Mullen gave her the first three rounds.

Statistically, this fight was about as close as it gets. Looking at the total significant strike numbers, de Randamie just edged out Holm 80-77. Holm outlanded de Randamie in rounds one (18-12) and three (18-16), while de Randamie won rounds two (19-13), four (16-12), and five (17-16). It was difficult to distinguish who was getting the better of the exchanges and the stats reflect that challenge.

More telling are the head strikes that de Randamie landed and she had a comfortable 28-18 advantage in that category. She also won the body strike battle 34-21, while Holm had a clear advantage in leg strikes at 38-18.

As for the slower sections of the bout that took place in the clinch, de Randamie landed 31 clinch strikes to 16 for Holm, despite Holm being credited with over eight minutes of control time.

No takedowns or knockdowns were scored.

The professional pundits on MMA Decisions saw this one for Holm, with 14 having it in her favor as opposed to the nine who agreed with the judges’ decision. On the extreme ends, Bloody Elbow’s Tim Burke had it 49-46 de Randamie, while MMA Fighting’s Jed Meshew took the liberty of doing the referee’s job for him and deducting points to get a 48-45 Holm score.

Immediately after the fight as the fighters waited for the scorecards, the UFC flashed the results of its own fan vote on the screen and the result was heavily in Holms’ favor, with 74 percent thinking she’d won the fight.

Verdict MMA users actually gave only the first round to de Randamie, with the second being a virtual tie and the other three increasingly in favor of Holm.

That scoring system takes the cumulative total of every submitted fan score (filtering out aberrant scores like random 10-7s if they comprise less than one percent of the total) in every round and divides by the amount of submitted scores to determine the winner of each round and also in totality.

In this case, Holm narrowly won round three, but had larger margins in rounds four (plus-51) and five (plus-61) to earn a clear 100-point victory. Or to put it in traditional scoring terms, 48-47.

Here’s what some of their peers had to say:

That’s nuts, that fight needs to be contested and that ref reviewed.

Had Holly winning 3 rnds to 2 for Germaine not including point deductions that shoulda been made. Germaine is great but it was Hollys night

Let me preface this by saying that I won’t retroactively do what Anderson should have done and penalize de Randamie for the late strikes. I fully agree Anderson could have been more assertive as far as making sure that de Randamie was either punished immediately for the infraction in round two or at least made to understand that a similar incident would result in an automatic point deduction. It’s inexcusable that de Randamie did not lose at least one point in this fight.

But points were not taken so I’m going to score within the same parameters as the judges. Having said that, I’d lean towards Holm 48-47, dissenting with the official cards in regards to the third round. For me, Holm landed a little more there even if it was primarily to the legs, and her glancing head kick at the end was the most convincing strike of that period. Rounds four and five I score the same as the judges.

I can’t strongly argue against a de Randamie card though.

It’ss clear that the real controversy stems from those cursed after-the-bell punches. Accidental or not, they happened, and it’s possible the damage that they did had a significant impact on what was a close contest.

In a February 2017 interview with MMA Fighting, Association of Boxing Commissions and Combative Sports referee trainer Rob Hinds praised Anderson, but also said that put in the same position he would have taken a point from de Randamie after the second incident.

“I feel like the ref from New York shouldn’t be reffing a main event fight,” White said post-fight. “They don’t have enough experience. He should not have been in there. But again, we don’t make those decisions. The commission does. That was a bad decision by them, and if that guy takes a point for hitting after the bell, it’s a draw. The only possible way this night could be any sh*ttier.

It’s unfortunate that Anderson was so reluctant to penalize de Randamie, as it not only would have spared Holm the loss, it would have set up a surefire triple threat match with Cris Cyborg for all the marbles (okay, maybe not). We’re all familiar with the phrase “Never leave it in the hands of the judges,” and this is one situation where the referee should have made his own mark on the fight to save them from having to render an unjust decision.

However—and this is a big however—the fact remains that no points were deducted and if we’re basing our verdict solely on the bell-to-bell action, it was too close to be claiming either fighter ran away with it.

In a just world, this fight is a draw. In the world we have?

Was Germaine de Randamie’s win over Holly Holm a robbery?