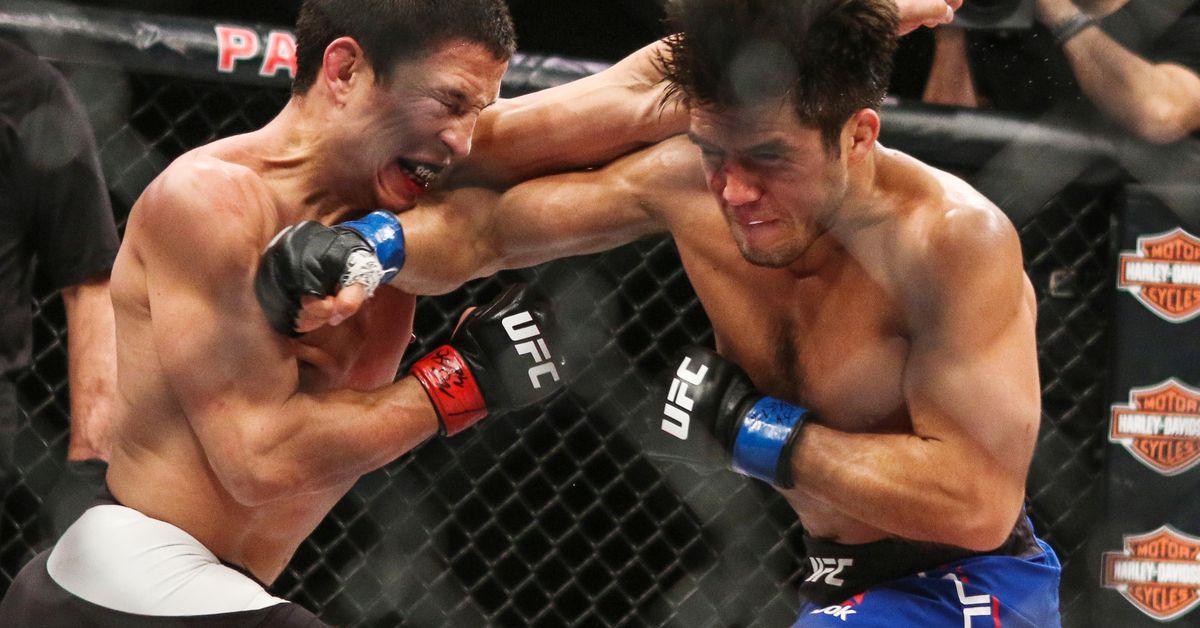 This Saturday, Joseph Benavidez fights Deiveson Figueiredo for a vacant flyweight title in the main event of UFC Norfolk and a win would cap off a 14-year world championship chase for Benavidez. But let’s not forget, he already holds a split nod over UFC champion Henry Cejudo from when they fought back on Dec. 3, 2016. Afterwards, Cejudo called the result a “complete robbery,” while Benavidez dismissed Cejudo’s complaint as him “playing the victim.”

In this week’s Retro Robbery Review, we figure out which fighter is right.

This is just 15 minutes of in-and-out exchanges, so early on you know it’s going to be difficult to score.

Both fighters utilize kicks early to establish distance, with Cejudo walking Benavidez down. He scores an early knockdown with a flurry, but Benavidez instantly recovers. Benavidez’s game plan is all about countering and he’s doing well even though he’s not keeping Cejudo out. Misfortune strikes Cejudo as his knockdown is essentially wiped out by a point-deduction after he lands a pair of accidental low blows. Cejudo also gets a trip in the round, the only successful takedown of the fight.

At the start of round two, Benavidez slips and immediately eats two hard rights. Benavidez’s movement is giving Cejudo problems, but also occasionally leading to sequences like that one. That said, Benavidez is so consistent with his volume, he just looks like the more active fighter, and he also has Cejudo visibly swinging wild and missing. Cejudo has a lot of success going to the body and for the most part he matches Benavidez’s pace, despite the commentary speculating that Benavidez might be working to tire Cejudo out.

Ahead of the third, Cejudo’s team tells him to stick to the body work and sure enough he continues to emphasize striking that area. Benavidez is right there with him though, countering with his own body punches. If anything, Benavidez has cranked up the lateral movement in the final round, which one can imagine leaving an impression on the judges as he’s still throwing and landing as well. The question is whether or not Cejudo is landing the harder shots. There’s no let-up in the closing seconds, both know they need to give it everything they’ve got. And both believe they did.

That’s definitely one of the stranger sets of scores you’ll find in the UFC.

Keep in mind that the math is a little funny because Cejudo was penalized for groin strikes in round one. Even then, anytime you see two judges give all three rounds to one fighter and one judge do the opposite, it’s going to raise some eyebrows.

If we want to nitpick, Trowbridge giving Benavidez the first round is peculiar. Perhaps he felt Benavidez’s nearly instantaneous recovery and the rest of his work in the period was enough to discount Cejudo’s knockdown?

Last week, I wrote that Paul Felder vs. Edson Barboza 2 was as close as a fight could go, statistically.

I was wrong. This is as close as a fight can go.

Almost every strike was counted as significant and according to the numbers Benavidez landed exactly one more significant strike than Cejudo (69-68). Benavidez was up 22-21 in round one, 22-21 again in round two, and then Cejudo won the final round 26-25. Outside of Cejudo’s knockdown in round one, this raw data isn’t particularly helpful for either man’s case.

Digging deeper, we can see that Benavidez had the total advantage in head strikes 39-29, while Cejudo won the body battle 29-19. There is nothing in the scoring criteria that says judges should value head strikes over body strikes, but one can wonder if Benavidez’s work up top swayed the decision.

Of the 19 outlets tallied on MMA Decisions, five scored the fight for Benavidez, five for Cejudo, and nine called it a draw.

The 28-28 draw cards are presumably the result of scoring the first round for Benavidez (a 10-8 with the deduction) and the other two 10-9 for Cejudo.

Scoring on The Verdict MMA app tells a similar story. That system—which takes the cumulative total of every submitted score (filtering out aberrant entries like random 10-7s if they comprise less than one percent of the total) in every round divided by the amount of submitted scores—leans in Benavidez’s favor, but by less than half a point.

This thread features Henry Cejudo’s history of scoring on Verdict.

We start with Cejudo’s fight against Joseph Benavidez. The 1st round had a difference of 0.01 only. pic.twitter.com/ug5mHU6LN2

The first-round scoring appears to indicate that the majority of users took the one-point deduction into account and scored the round for Cejudo. However, they also thought more highly of Benavidez’s performance as the fight went on.

I distinctly recall leaning towards Benavidez when first watching this fight three years ago. Upon review, I can see why Cejudo and his fans were upset.

As all significant strikes are not created equal, it does look like Cejudo was landing the harder shots throughout the fight. This is where the cageside judges have an advantage as up close they should have a better grasp of what strikes are doing damage and which ones are glancing blows. On the other hand, each individual judge doesn’t have the same clear angles granted to the viewers at home (nor the benefit of hindsight, as in my case).

I would still go with Benavidez based his ability to string together combinations and his smart counters, which went a long way towards fooling viewers like me into thinking that he was the more accurate striker (in reality, Cejudo had the higher percentage of total significant strikes landed, 34% to 29%).

If you want an example of how subjective scoring can be, Benavidez-Cejudo is a good one.

Based on the media scores and stats, how can it be?

It can’t be said enough, the statistical difference in significant strikes was one. One! Where do we even begin to differentiate between these two performances? Even if you automatically grant Cejudo the first round due to the knockdown, his penalty muddies the waters and two of the judges still scored rounds two and three for Benavidez so it would only change the margin of victory. It’s really only Trowbridge’s 10-8 round one score that Cejudo should justifiably be peeved about.

There are just so many exchanges in this fight where it’s impossible to tell who truly got the better of them. When it seemed like Benavidez had Cejudo figured out, Cejudo would answer with a right hand that backed Benavidez up; when Cejudo got in range for a power punch, he’d eat a three-piece combo in return. Neither fighter took the lead for any significant period of time.

Sorry “Triple C” supporters, this next part might make you cringe.

Was Joseph Benavidez’s win over Henry Cejudo a robbery?